It’s also understandable — at least for the first quarter — since Zimmer rested 30 of his players. For some players, though, this was a lost chance to prove themselves against better competition. One of them was Jake Browning, who had everything sailing nicely to be the backup to Kirk Cousins. Kellen Mond’s performance wasn’t extraordinary — or even good — but Browning’s was disappointing.

It wasn’t all bad things on Saturday, as some bright spots were evident on the field. Off the field, the best thing was fans back on the stands, where they should always be. God forbid us from another pandemic. Now, let’s start, getting the bad out of the way first.

Bad: We Don’t Have Much Depth

This was already known, but we definitively can’t afford an injury this season. The backup OL couldn’t do anything against the Broncos front seven, WRs had almost no separation, and the defense looked like 2020s. This may seem harsh after only one preseason game, but the back of our roster is not good.

Yes, he deserves a topic for himself. We all saw last year that Dozier is not starting material. Saturday, he proved it again. He was the worst player on the field and had a holding penalty turned into a safety. The good news is that, since Oli Udoh didn’t play, he most likely will start week 1. How he will play is another story, but his camp was promising.

Personally, I’m not a big fan of Colquitt. He was good during 2019, but his 2020 was really bad. I thought that at least the Vikings were going to keep another punter to compete with him, but he got cut to make room for Sheldon Richardson weeks ago. Saturday showed the team was wrong with more bad punting from Colquitt and Zimmer saying afterward that it is “cause for concern”. Let’s see this week if Zimmer and Spielman will bring someone to push for the job.

Now, let’s focus on the good part of the game.

You could say that Rose was the best player on the field for the Vikings, and most people would agree. The undrafted RB from Kentucky got the most out of his opportunity. With Cook and Mattison out and Kene Nwangwu injuring his knee during the beginning of the game, Rose rose to the occasion (pun intended). It will be tricky for him to make the team, but if he continues to improve, he’ll have a shot replacing Abdullah. Cook and Mattison aren’t going anywhere for obvious reasons, and Nwangwu will be the returner if healthy, so Rose’s battle would be with the 28-year old vet. 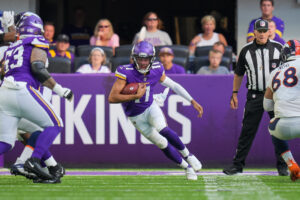 Again, Mond’s debut wasn’t necessarily good, but he showed flashes of potential. He maneuvered the pocket very well and ran for some yards when he had the chance. He still needs to improve his deep passing, but for someone who had two padded practices, it was a solid performance. Davis, on the other hand, was very good. His potential is sky-high, but injuries slowed his offseason. Still, he can definitely push to be Udoh’s backup in week one. If he plays this year is another story. He can, but it will depend on Udoh’s performance and his improvements through practices.

Good: No Misses from the Kicker

This may sound like a stretch – probably is. But every time a Vikings kicker hits all of his field goals — I will count as a win. It was just 34 and a 25-yard kicks, but it still counts. And looks like Zimmer liked it too, since the team cut Riley Patterson on Monday, the other kicker on the roster.

This Saturday, the team plays the Colts, and some starters should actually be on the field.