49ers Run All over Vikings 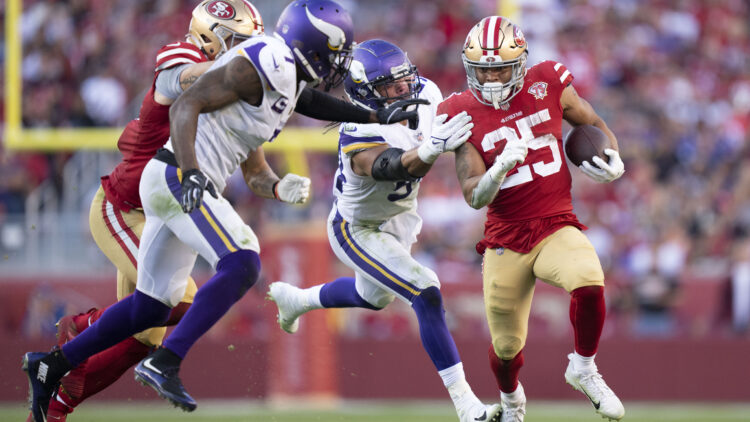 Week 12 is in the books, and it was another week of disappointment for the Minnesota Vikings.

The San Francisco 49ers run all over the Vikings, ending in a 34-26 defeat for Minnesota. The Vikings fall to a 5-6 record and have still yet to reach a positive record this season. Upcoming games against the Lions and Steelers give them the best opportunity to do that, but let’s concentrate on this week.

Leaving the Bay Area with a win was never going to be an easy task against a San Francisco team that is formidable and perfectly set up to attack the Vikings weaknesses.

One of the glaring problems the Vikings is defending the run. So against one of the few coaches and a team that loves to run the ball as much, if not more than Mike Zimmer and the Vikings, it was always a difficult matchup even before the Vikings lost their entire starting defensive line.

This game saw the 49ers run all over the Vikings for 208 yards. If you let a team rush for that much and control the clock with a time of possession of 37.07 — then you are probably going to lose. Some other parts of the game could have been better. The Vikings have taken care of the ball well this season, so it was an untimely game for Kirk Cousins to throw an interception and Dalvin Cook to fumble in quick succession. There was some abysmal officiating too, but truth be told, the 49ers were physically dominant throughout the game.

The bulk of the damage was done by Elijah Mitchell and Deebo Samuel. The Vikings only gave up one catch to Samuel for 12 yards, but the wide receiver provided the spark in the running game to get the 49ers going after the Vikings had started strong (six rushes for 66 yards and two touchdowns at an average of a massive 11 yards per rush). Samuels explosive plays put the Vikings on the ropes, but it was the grinding smashmouth running up the gut by Elijah Mitchell that finished them off.

Mitchell carried the ball 27 times for 133 yards at an average of 4.9 yards per rush, and a 3rd quarter two-yard touchdown run was the cherry on the cake. By the end of the game, the 49ers run game was so dominant that, on what turned out to be the penultimate drive of the game, I expected to see the 49ers run all over the Vikings one last time and see the game out.

They almost did with a 13-play drive that lasted seven minutes and eight seconds. Credit to the defense who did manage to make a stop, all be it in field goal range. If converted, the field goal would almost certainly seal the game for the 49ers. But it was missed. Kirk Cousins and the Vikings offense had a chance to rescue the game. They’ve been good in this position for that during most of the season.

A 23-yard pass to Justin Jefferson got everybody’s hopes up, but that was where the hope ended — just one completion for two yards in the next four pass attempts, and it was game over.

It’s not the only issue the team has, but for a team with a defensive head coach — that spent nearly all of the budget in free agency on bolstering the defense, to be as bad as they have been defending the run while also consistently giving up big plays down the field — simply isn’t good enough. I’m confident there will be playoff football this season. The competition for the seventh seed is inferior, but the defense needs to improve drastically, especially against teams that run the ball effectively.

Otherwise, it will be a game like this one that saw the 49ers run all over the Vikings that will ultimately seal this team’s fate. Getting some players back healthy might help, but the run defense has been a problem since last season — one that has continued into this season whoever has been on the field.

And it’s a problem Mike Zimmer needs to solve before it costs him his job.