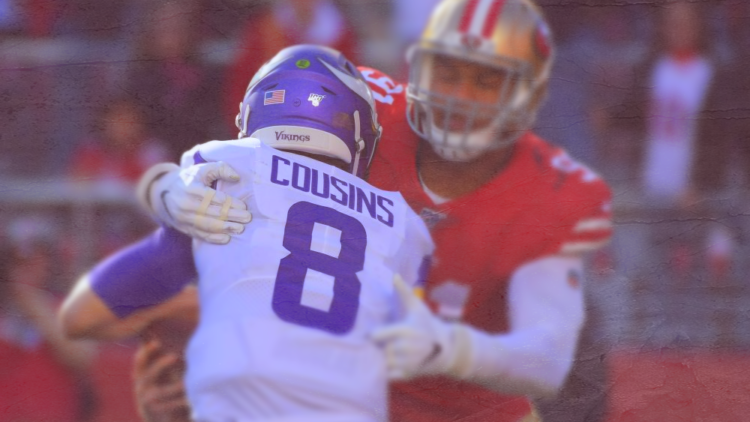 The Minnesota Vikings seek to extend their winning streak to three games on Sunday after a 3-5 start to the 2021 season. Right now, the Vikings are in a prime position to reach the postseason if they can find a way to finish the season with a 4-3 record. Of course, a mark better than that is advantageous, but a 4-3 finish to 2021 likely gets Minnesota in the dance.

Regrettably, a road game at San Francisco is not what the doctor ordered to continue the win streak. Here’s why.

The 49ers Are Actually Good

Take your postseason hopes at 5-5 in which you hold for the Vikings — and transplant them to the 49ers. Kyle Shanahan’s team is in the same boat. San Francisco is just as hungry.

San Francisco is a better ballclub than the Kansas City Chiefs, Green Bay Packers, Baltimore Ravens, and Los Angeles Chargers, per DVOA. So, don’t turn on the television this Sunday expecting the Vikings to play a ho-hum team. Unless the metrics lie, you’ll be shocked — and probably miffed.

By every metric on this planet, the Vikings are poor in defending the run.

Guess what? Shanahan is a self-professed, run-first guru. Plus, he’s innovative with rushing play calls. One can make an argument there is no worse team to plop on the Vikings docket if they hope to rectify a poor rush defense.

Danielle Hunter, Michael Pierce, Dalvin Tomlinson, and Everson Griffen will not play, so the next men up are D.J. Wonnum, Armon Watts, Sheldon Richardson, and Kenny Willekes.

Playing without a starting defensive line while holstering an already-bad run defense is hell against a team like the 49ers.

The Time and Place

This one is weird — but if you’re a Vikings fan, you can feel it in your bones.

The Zimmer brand of Vikings performs poorly in road games inside the Pacific time zone. That’s an obscure stat, but it is real. Since Zimmer took over the Vikings, Minnesota is 3-6 (.333) in Pacific time-zone road games. If that sounds lousy, that’s because it is. With the random parameter, the Vikings 3-6 record ranks 25th in the NFL since 2014.

On the whole, Zimmer’s Vikings are the league’s 12th-best road team during his tenure. However, when they venture to the west coast, the prospect for success dips to 25th-best (or eighth-worst).

Moreover, in the late afternoon timeslot (midwesterners call these “3 o’clock games”), Minnesota is 7-10 (.412) since Zimmer arrived. That ranks 21st in the NFL.

The Vikings are at their best in the noon (early afternoon) timeslot, for whatever reason. And the 49ers rarely play early on Sundays.