Does this dubious stat mean the Vikings are Good or Bad? 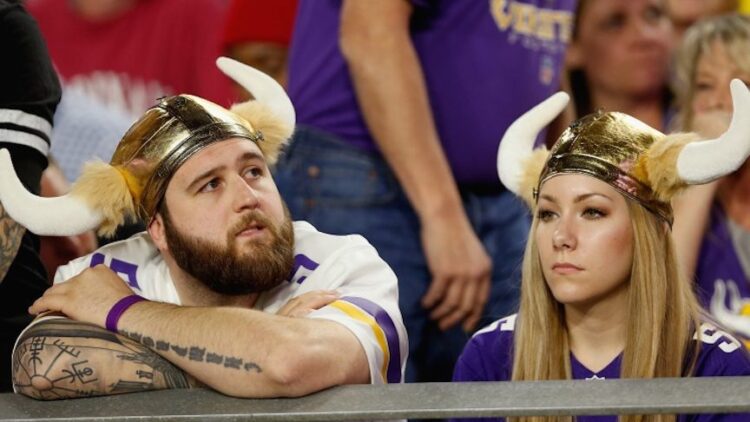 You know how people say that getting a puppy, or raising kids, or being stuck at home with your family 24/7 during a pandemic adds gray hairs and takes years off your life at an expedited rate? I would beg to argue that being a fan of the Minnesota Vikings football team might have a similar effect on people.

I mean generally speaking, all franchises have heartbreak moments, but doesn’t it feel like for whatever reason the Vikings seem to have more of them? Old school fans go back to multiple Super Bowl appearances with no rings. Middle-aged fans will never forget the run in ’98. Even the younger crowd has found themselves jaded already with the ’09 NFC Championship, Blair Walsh wide left and the Philadelphia Flop. Most other organizations have a championship mixed in there to soften the blow, not us.

Thus pulling out our gray hairs yelling at the T.V. has become some sort of religion here in Minnesota. But check this out…

2021 might be the most stressful season to date in the history of the franchise and it’s only Week #12!

As CBS Sports highlighted and then documented on their Instagram this week, 8 of the Vikings 10 games this season have been decided on the game’s final play. Here’s the list…

All of these plays are documented in the Instagram post below if you’re a masochist and want to relive them.

Here’s what we know.

The offense is pretty freaking good, stemming on pretty stellar play from QB Kirk Cousins. Highlighted by the Vikings Communications account on Twitter, Cousins is 6th in Completion % (68.2%), 7th in passing yards (2,775), 5th in Passing TDs (21), 2nd for interceptions (2) and 3rd for passer rating with a 106.3 season rating. Cousins has found a way to lead the team down the field for successful two-minute drives multiple times in those 8 games highlighted above.

But here’s the good that comes out of these down to the wire games…they’re battle tested and they *can* beat any time on any given Sunday. That’s not to say that they will, or that they’ll dominate the games they should dominate, but they’re good enough to win on any given week. And if they find themselves on the wrong end of the scoreboard late in a game, they have the confidence that, given the shot, Kirk Cousins and the offense can get the job done. That’s something that we couldn’t always say about this team or about Kirk.

Minnesota kicks off the softest part of their schedule with a winnable game on the road against the 49ers this week. If they can reel off three wins in their next four they’ll be in a good spot. Either way, we’ve got meaningful football the rest of the way here which is more than most of us could have asked for given the way that this season started.

This is not a perfect team, in fact they are very flawed in many areas…but in my opinion they are a playoff team. Now they need to prove it.