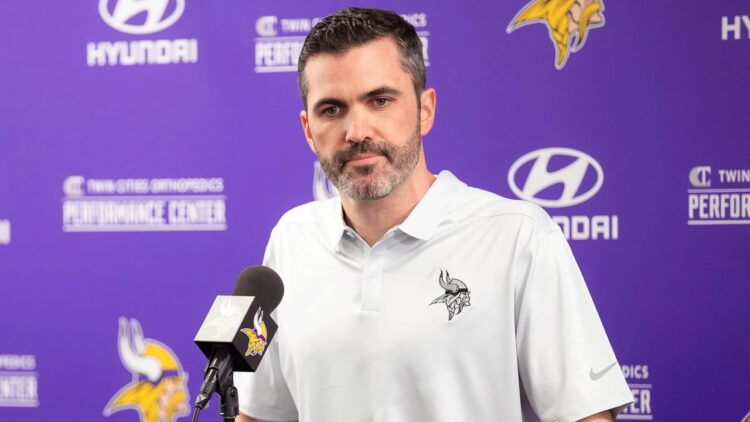 The Minnesota Vikings on Wednesday introduced the new members of the 2019 coaching staff during a press conference at TCO Performance Center in Eagan. Special teams coordinator Marwan Maalouf, offensive coordinator Kevin Stefanski, and assistant head coach/advisor Gary Kubiak addressed the Minnesota media for the first time in their new roles.

Naturally, Maalouf was bombarded with questions about kickers right off the bat. The special teams coach said the team will explore all options when it comes to finding a kicker.

“It all starts with the evaluation process. All things are on the table. We’re starting to look at draft kickers, free agent kickers… That’s [an area] I’ve had good luck with in the past.”

When it comes to finding a kicker, Maalouf said he looks at many important aspects, including the flight of the football, the rotation, technique, how he approaches the ball and mental state. But the most important thing is to try to find someone who fits what the team is trying to do.

Having the mentality of “being a football player first, then a kicker second,” said Maalouf, who has learned from great kickers such as Adam Vinatieri, Phil Dawson, and Matt Stover.

#Vikings new special teams coordinator Marwan Maalouf: “We want to be aggressive, a situational special teams unit… I think special teams can really complement offense and defense. No penalties… unpredictability is a great thing as well.”

When a kicker struggles, which is tradition in Minnesota, Maalouf said his strategy first involves getting to know the person.

“You don’t want to over-coach,” said Maalouf. “You want to know when to back off and when to approach him and maybe mention one or two things about his footwork or his technique or what his aiming points are and what he’s thinking about prior to the kick. A lot of things in football are muscle memory. You don’t want guys thinking. You want them to go react.”

Maalouf has one year of experience as a Special Teams Coordinator. He spent the 2012 season in the lead role for the Indianapolis Colts. Prior to joining the Colts, Maalouf was an assistant for the Baltimore Ravens from 2008-2011 and a Special Teams Quality Control Coach for the Cleveland Browns from 2004-2006.

The Vikings in January removed the interim tag from Kevin Stefanski’s title and hired him as the team’s full-time offensive coordinator. Stefanski on Thursday introduced the entire offensive staff, which includes:

AC Patterson, son of defensive line coach Andre Patterson, will be an Offensive Quality Coach this season along with Christian Jones.

Stefanski noted how excited he was to work with this staff. He specifically mentioned one coach on multiple occasions. An experienced, Super Bowl-winning head coach turned offensive adviser… Gary Kubiak.

“From my perspective, as a first time coordinator, I would have been foolish not to go do everything in our power to bring in a guy who’s been in seven Super Bowls as a player and a coach. [He] called the plays the last time he won the Super Bowl. So as a resource for me, I can’t tell you how lucky I am as we’re putting our system together… to have a resource sitting right next to me who’s done it, and done it at a high level… It’s just been really pretty special.”

Stefanski, who confirmed he will be calling plays, called the move to hire Kubiak a no-brainer, as the two see the game pretty similarly.

“There’s very open and honest dialogue with coach [Kubiak] and with Rick Dennison and Klint Kubiak,” Stefanski said. “I think it’s really healthy to have that and I can just tell you… the dynamic has been outstanding.”

Gary Kubiak was hired as the Assistant Head Coach/Offensive Advisor. Kubiak, 57, is a former NFL quarterback with nine years of playing experience. He’s been coaching in the NFL since 1994 and is a four-time Super Bowl champion as a coach.

Kubiak discussed briefly how he ended up being hired by the Vikings.

“I’ve known Zim for a long time. I respect him as a person, I respect him as a coach and I respect how he tries to win,” said Kubiak. “We’ve had some conversations throughout the years so it was an easy talk for me to come and visit with him… It just worked out that way and I just felt very fortune to be here with such a great organization.”

Kubiak, who described his position as “unique,” said he’s not worried about not calling plays.

“I’ve coached plays in this league for 25 plus years. I don’t think I ever went to a game where I called everything myself. Whether it was Mike [Shanahan]… Or whether it was Rick Dennison or Mike Sherman or Kyle Shanahan, who worked for me, I think as a group Kevin has a job to do. It’s our job as coaches to help him in any way we can… I think we’ve got a lot of experience to help him out.

As far as his offensive philosophy and if NFL teams can still win the ball by running in a passing league, Kubiak said it all starts with the head coach.

“The head guy here wants to be physical. He wants to be mentally and physically tough as a football team. I think that’s where winning starts. Personally every good offense I’ve ever been around runs the ball pretty good… I believe in that. I think it gives you a chance to make big plays. As Kevin said we’re trying to marry everything we’re doing, run and pass, to give us an opportunity to do that.”

Kubiak said he will be watching games from the booth so he can see the big picture while Stefanski calls plays from the sideline.

When asked about how a Kubiak offense helps out a quarterback, Stefanski noted a shared philosophy.

“We’re being diligent about this thing… When we’re all on the same page at that micro-level I think will serve us well moving forward.”

Rick Dennison is the Vikings new offensive line coach/run game coordinator. He has 25 years of NFL coaching experience, including four as an offensive coordinator. He last worked as the run game coordinator for the New York Jets in 2018. Dennison has a longstanding relationship with the Vikings new assistant head coach/offensive advisor Gary Kubiak. The two were teammates for the Denver Broncos from 1983 to 1990 and have coached together in some capacity for 15 seasons. Dennison is a three-time Super Bowl champion as a member of the Broncos coaching staff.

When it comes to the Vikings offensive line, Dennison said “we’ll do what we do best.” In the past that has generally meant a zone blocking scheme, but both Dennison and Kubiak said they will mix things up and throw in some gap blocking as well to keep things unpredictable.

Dennison said the traits he looks for in an offensive lineman are intelligence, toughness and athleticism. But the biggest thing that sets apart a successful running team?

“Persistence is the biggest thing,” said Dennison. “You’re not always going to be successful. There might be a couple plays that don’t work out for you. But if you keep grinding and keep working at it. It’s not always the defense that takes it away. Perhaps it’s your technique, perhaps one guy didn’t do something right. Just persistence and then keep grinding at it. I think that’s the key.”

Stefanski said that Dennison, who is an engineer by trade, is in charge of the run game and will be a big part of developing the game plan each week.

“What that allows us to do is, when we get into game-plan mode, Rick is really at the forefront of it… Rick is kind of in charge of putting that game plan together. Then we sit with Rick and we say ‘Alright, let’s see the formations you have and we’re going to build off that and build these schemes, these passes off of that’… In the game-plan world of coordinating a run game, I couldn’t be more pleased with having Rick Dennison doing that.”

Klint Kubiak, son of Gary, is the Vikings’ new Quarterbacks Coach. Kubiak previously coached for the Vikings from 2013-2014, when he was an assistant WR coach/quality control coach. During that time he worked with current offensive coordinator, Kevin Stefanki. After his first stint with the Vikings, Klint, 31, became the WR coach for the University of Kansas before his most recent role as an offensive assistant/QB coach with the Denver Broncos.

Kubiak talked about his relationship with Stefanski.

“We’ve been real close. When I first got here… I was the low guy on the totem pole and he spent a lot of time with me just kind of showing me the ropes and he didn’t have to, so I always really respected him for that. We stayed close and it’s a really good opportunity for me to be able to work with him still.”

As far as working with his dad, Klint said it’s really cool.

“This will be the second time. The last time was in 2016. What a great resource. We already have a close relationship but when you add your work into it, it just brings us together even more… I’m very blessed.”

Getting down to business, Klint said his main job is to get Kirk Cousins to play at his best.

“Main job is to get him to play at a high level. To help him win the game, to teach him the game plan, teach him the concepts. In the offseason get him comfortable with our scheme so that he can perform at his highest level on Sunday… You have to teach him the progressions, team him all the run-game checks. That’s your job as a coach is to get him prepared to play… so that come Sunday [he’s] reacting and not thinking.”

"Coach Zimmer is just tough as nails. He's the kind of guy you want to work for and as a player he's got the kind of demeanor you want to emulate. So love getting a chance to be with him again. He's a top-notch guy." – #Vikings QB coach Klint Kubiak

One word came up often on Thursday. It’s a common word that’s a familiar theme if you’ve followed Vikings football lately, but it’s also a desired result that has yet to be successfully fulfilled. That word is unpredictable.

While it’s been unattainable in recent seasons, this is a coaching staff with as much experience as any to make that happen. And they have the Super Bowl rings to prove it.

Here’s a look at the Vikings’ entire 2019 coaching staff.