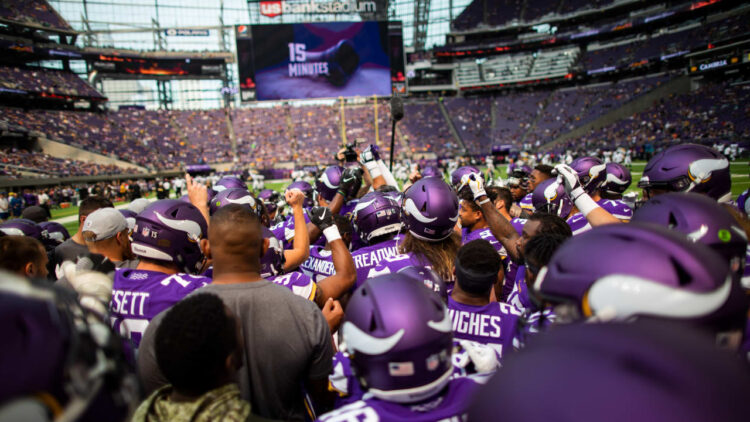 On Monday afternoon the Minnesota Vikings filled two roster spots after five openings were announced earlier in the day. Originally reported by Ben Goessling of the Star Tribune and later confirmed by the team’s official Twitter feed, the Vikings signed former Gophers fullback Kobe McCrary (#48) and guard Kareem Are (#68).

Vikings signed former Gophers fullback Kobe McCrary and guard Kareem Are, who was most recently with the Raiders. Both are practicing today.

McCrary, 24, spent time with the Vikings during rookie minicamp. The undrafted free agent from the University of Minnesota is listed at 6-foot-1, 240 pounds. In two seasons with the Gophers McCrary rushed for 738 yards with 11 touchdowns. He led the team with 5.3 yards per carry his senior season.

McCrary will replace injured fullback Johnny Stanton on the roster. Stanton was waived Monday after suffering a serious ankle injury during Saturday’s game against the Jaguars. McCrary will wear #48, the number previously used by Stanton.

The Vikings also signed guard Kareem Are. Are was most recently with the Oakland Raiders. He played college football at Florida State where he blocked for running back Dalvin Cook his senior season. The 24 year-old will presumably take the roster spot vacated by Cedrick Lang, who previously wore #68. Are is listed at 6-foot-6, 325 pounds.

Here’s the background on Are from his draft profile on NFL.com:

Are needed to grow up fast after his father passed away, as he helped his mother raise his two younger siblings. After a strong high school career, he went to Fort Scott Community College, earning all-conference and all-Region honors twice. The number one junior college guard prospect joined the Seminoles in 2014, but redshirted behind a veteran offensive line. Are started eight games at left guard in 2015 before garnering second-team All-ACC accolades as a senior. He played in ten games, starting nine, but missed three with two separate concussions.

Both players were present today during practice at TCO Performance Center in Eagan.