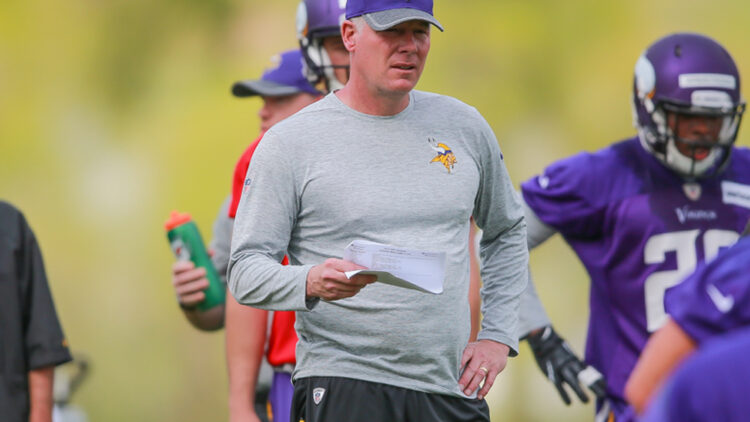 Pat Shurmur is headed east. The former offensive coordinator of the Minnesota Vikings is now the head coach of the New York Giants. Confirming reports that had surfaced after the Vikings’ 29-24 victory over the New Orleans Saints in the divisional round of the playoffs, the announcement was made official on Monday.

After coming to the Vikings as tight ends coach in 2016, Shurmur was named interim offensive coordinator after the departure of Norv Turner. He was given the permanent role prior to the 2017 season.

The Vikings’ offense improved tremendously under the tutelage of Shurmur. The unit made strides in multiple areas, including the run game, pass protection, total yards and total points. His ability to develop and work well with quarterbacks was widely evident in his short time in Minnesota.

To replace Shurmur, the Vikings are searching both internally and around the NFL.

Vikings head coach Mike Zimmer said during Tuesday’s press conference that Stefanski is a “smart guy” and the two plan to sit down and talk at some point. He also noted that chemistry is an important factor in determining “the right guy” for the job. Stefanski, the longest-tenured coach on the Vikings staff, is only 35 years old. In his 12 seasons with the team, he has coached the quarterbacks, tight ends, and running backs.

Bevell was the offensive coordinator for the Vikings from 2006 to 2010. From 2011 to 2017, the 48 year-old coordinated the offense of the Seattle Seahawks,  but was relieved of his duties earlier this month.

Also in the mix for the position are former Giants head coach Ben McAdoo and former Denver Broncosoffensive coordinator Mike McCoy, according to Ian Rappaport of the NFL Network.

McAdoo was fired by the Giants in December amidst a disastrous 2017 campaign for the G-men. The 40 year-old led New York to a 2-10 record this season and is 13-16 in his career as a head coach.

McCoy was fired mid-season by the Broncos, who suffered the same fate as the Giants. McCoy was previously head coach of the Los Angeles Chargers from 2013-2016. The 45 year-old holds a 27-37 record as a head coach.

Zimmer said that he’s always open to new ideas and new wrinkles when it comes to offensive philosophy. However, because of the personnel brought in last offseason to fit Shurmur’s scheme, it’s unlikely the Vikings would shift directions entirely moving forward.

When asked how he felt about losing Shurmur to the Giants, Zimmer said the following:

Mike Zimmer on losing an offensive coordinator: "This happens. When you're successful, this happens every year. So, I hope I have a coaching tree that's 200 people long… It means you're doing something right."