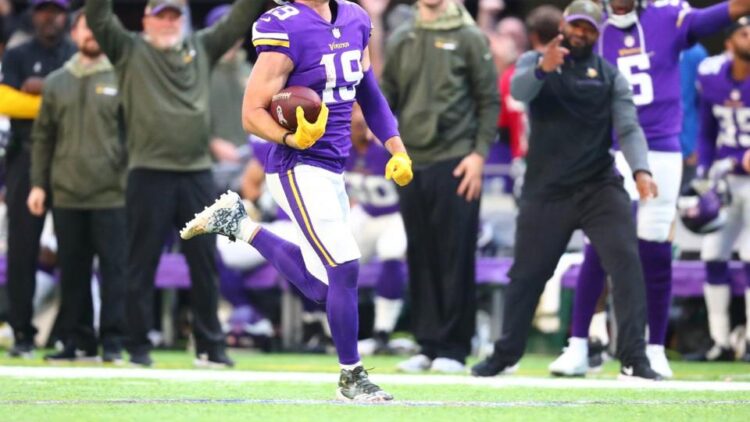 This is the third article in a series that will break down where the Minnesota Vikings rank at each position within the NFC North and ultimately decide which NFC North roster is the most talented.

In a pass-heavy NFL, rostering a quality group of pass-catchers is vital for any team that plans on contending for playoff spots (or more). The NFC North includes teams on both ends of the league spectrum in terms of talent at the wide receiver and tight end positions.

This division suddenly includes an overflow of quarterback talent, only providing more opportunities for pass-catchers to shine. However, the team at the top boasts a duo that shined a season ago without that elite quarterback talent.

But first, as always, an update on the standings following the rankings of the quarterback and running back positions.

The rise of Adam Thielen and Stefon Diggs as a premier wide receiver duo was one of the NFC North’s most fun storylines in 2017. Thielen earned All-Pro and Pro Bowl honors with a 90-catch, 1,200-yard season that earned the league-wide respect he has deserved for several years. The former Minnesota State Maverick is among the savviest route runners in football and doesn’t back down from a challenge against an elite cornerback (see: Marshon Lattimore in the divisional round playoff game against the Saints).

Meanwhile, Stefon Diggs continues to display more elite potential with each season. As savvy as Thielen is as a route runner using quick head fakes and body twitches, Diggs might be the most crisp (crispest?) route runner in the NFL. His quickness in and out of breaks is matched by few players in the league. Additionally, Diggs took a giant step forward in 2017 in contested catch situations. Pro Football Focus ranked Diggs as the top receiver in the NFL at making contested catches a season ago.

Stefon Diggs is the wide receiver you want in contested catch situations! pic.twitter.com/HaMCmQmBhO

At tight end, Kyle Rudolph is as reliable as they come. He won’t blow you away with speed or quickness, but he will beat the linebacker or smaller defensive back in front of him and move the chains. Kirk Cousins may have described it perfectly during OTAs when he said throwing to Rudolph is like “throwing into a mattress.”

Minnesota will need Laquon Treadwell (or Kendall Wright) to prove his worth this season as a third wide receiver solidify this pass-catching group among the best in the NFL. But for now, tops in the NFC North will do.

Despite the loss of Jordy Nelson, the Packers maintain a No. 2 ranking in the NFC North. Why?

First of all, Jordy Nelson showed his age last season. When he wasn’t paired with one of the greatest quarterbacks of all-time, Nelson’s production dropped off significantly and it should be fairly easy to replace.

Second, the Packers added one of the best receiving tight ends in the NFL in Jimmy Graham. The former Saints and Seahawks red-zone dominator is poised to wreak havoc in the NFC North. He has caught double-digit touchdowns in three of his last five seasons and is truly a matchup nightmare for defenses. He and Rodgers teamed together is a frightening thought.

In addition to Graham, Davante Adams and Randall Cobb return to the Packers receiving corps. Adams is coming off back-to-back double-digit touchdown seasons and has emerged as a respected route runner around the league is in own right. Cobb, meanwhile, has seen his production drop since his breakout 2014 campaign but still provides a reliable slot presence for the Green Bay offense.

The Packers are in a similar situation to the Vikings in that they need a player to emerge as the third wide receiver. Geronimo Allison appears to be the favorite and has the most experience, though several hungry young guys will be given a chance before the 2018 season starts.

The Lions would have taken the No. 2 ranking if this was strictly a wide receiver analysis. However, the difference between Jimmy Graham and Luke Willson at tight end vaulted the Packers to No. 2.

Detroit’s duo of Golden Tate and Marvin Jones has a strong argument for the best in the NFL. They each surpassed 1,000 yards in 2017 and have seemingly replaced the mammoth void left by Calvin Johnson a few years ago.

Tate provides Matthew Stafford with a gritty slot option out of the slot who feasts on underneath routes and mismatches against linebackers. He caught 76.7% of his targets last season, which was among the best in the NFL in 2017.

Xavier Rhodes learned a whole lot about Jones on Thanksgiving a season ago. It’s arguably the only game in the last two seasons where Rhodes was legitimately defeated by the opposing top receiver. Jones went for over 100 yards and a pair of touchdowns to being the Lions back from a double-digit deficit (Rhodes did end the game with an interception of a pass targeted at Jones, however).

The Lions have struggled to find a reliable pass-catching tight end for some time. Eric Ebron appeared to be the solution at times, but issues with consistency and injuries prevented that. Can newly added Luke Willson be that guy?

The Bears made quite possible the splashiest offseason wide receiver acquisition in Allen Robinson. Yet, they remain at No. 4 in the divisional rankings. That’s where this receiving group was at last season. Kendall Wright, who is now a Viking, was Chicago’s leading receiver last season at 614 yards. No other player on the roster hit 400 receiving yards.

Now, part of the lack of production was due to Chicago’s scheme and trying to get a rookie quarterback comfortable. The Bears were truly a run-first team last season and Jordan Howard’s workload can prove it.

The offensive scheme will likely open up a little bit in 2018 with the addition of Robinson and former Eagles tight end Trey Burton. But many more spots on the depth chart will need to be filled during training camp, such as second, third, fourth and fifth at the receiver position. Maybe Taylor Gabriel can give the Bears an added boost? Maybe Kevin White can finally get over the injury hump?

Outside of Robinson and Burton, many questions remain for this Bears receiving group.