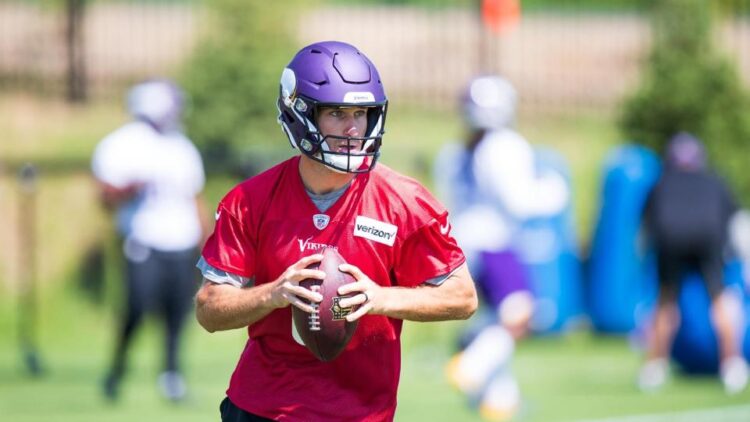 This is the first article in a series that will break down where the Minnesota Vikings rank at each position within the NFC North and ultimately decide which NFC North roster is the most talented.

Quarterback play has rarely been the calling card for the “Black and Blue” division over the past couple of decades. Green Bay has had its Hall-of-Fame quarterback, but the remaining three teams have largely struggled to find long-term answers.

It appears as if that narrative could be ending soon. Matthew Stafford was just awarded one of the richest contracts in NFL history to remain Detroit’s signal-caller. And speaking of rich contracts, coveted free agent Kirk Cousins signed a mega deal to become the Vikings’ quarterback for the foreseeable future. Lastly, Chicago selected Mitch Trubisky with the No. 2 overall pick in the 2017 draft and hopes he can be the franchise quarterback Bears fans yearn for.

But where do these players rank among their NFC North rivals? A couple of them are easy. Others, not so much.

This series will rank each NFC North team by each position and award points based on rankings. For example, a No. 1 ranking will award four points, No. 2 will award three, and so on. Due to the extreme value of quarterback play in the NFL, however, points for this position will be doubled.

To nobody’s surprise, the Packers take the top spot in the NFC North quarterback rankings thanks to Aaron Rodgers. It’s pretty easy to make an excellent argument that Rodgers is the most efficient passer in the history of the NFL. He has recorded a passer rating over 100 in seven of the last nine seasons and at least eight yards per attempt in five of the last eight seasons.

The Packers are a lock to win double-digit games when Rodgers remains healthy. In fact, since 2009, the Packers have only won fewer than 10 games twice — in 2013 and 2017, each seasons in which Rodgers missed significant time with an injury.

Detroit and Minnesota are not separated by a wide margin at the quarterback position. Matthew Stafford’s performance in 2017 was just slightly better than Cousins’s, though, which moves Detroit to No. 2 in the NFC North quarterback rankings.

Stafford paced the entirety of the Lions offense last season. Detroit ranked dead last in the league in rushing offense, but managed to rank 13th overall thanks largely to Stafford’s production as a passer. He ranked fifth in yards per attempt (7.9) and sixth in passer rating (99.3) to go with box-score numbers of 65.7 percent completion, 4,446 yards, 29 touchdowns and 10 interceptions.

In many ways, Stafford’s job mirrors what Rodgers is doing in Green Bay. Each has little support in the run game and is forced to carry a heavy load of the offensive production on their own shoulders. Detroit would be a sad, sad offense without Stafford at the helm.

The Vikings signed former Washington Redskin quarterback Kirk Cousins to a three-year, $84 million deal prior during the 2018 free agency period. During his tenure in Washington, Cousins thrived as a high-volume passer despite the lack of a truly elite receiver or a consistent rushing attack.

While his rushing attack wasn’t always consistent as a Redskin, his production as a passer was. He’s the only NFL passer to record 4,000 yards and 25 touchdowns in each of the past three seasons. He met those marks last season with 4,093 yards and 27 touchdowns to 13 interceptions. Cousins finished the 2017 season ranked ninth in completion percentage (64.3%) 10th in yards per attempt (7.6) and 12th in passer rating (93.9).

The most exciting for many Vikings fans about Cousins is the discussion about what Cousins can do with a bolstered receiving corps and running game. Stefon Diggs and Adam Thielen represent the NFL’s best receiving duo while second-year running back Dalvin Cook showed star potential in four games as a rookie before a season-ending injury.

Cousins presents the Vikings with an upgrade at the most valuable position on the field. Will it be enough to get them past the NFC Championship?

Chicago rounds out the NFC North quarterback rankings with second-year passer Mitch Trubisky. The former No. 2 overall pick started 12 games as a rookie and held his own amidst constant offensive line turnover and inexperienced receivers.

Trubisky didn’t produce eye-popping statistics (59.4% completion, 2,193 yards, seven touchdowns, seven interceptions, 6.6 yards per attempt, 77.5 passer rating), but he displayed several important traits that the Bears coaching staff could use to scheme with. Most notably, Trubisky’s mobility and ability to throw on the run showed the potential for an offense that not only gets Trubisky out of the pocket on rollouts, but also hides offensive line weaknesses in pass protection.

The Bears have constructed a young roster with several key pieces in place that can develop into star talents. Trubisky is one of those pieces. Unfortunately, the Bears happen to play in what is now a division dominated by excellent quarterback play, so they fall to No. 4 in the NFC North quarterback rankings.