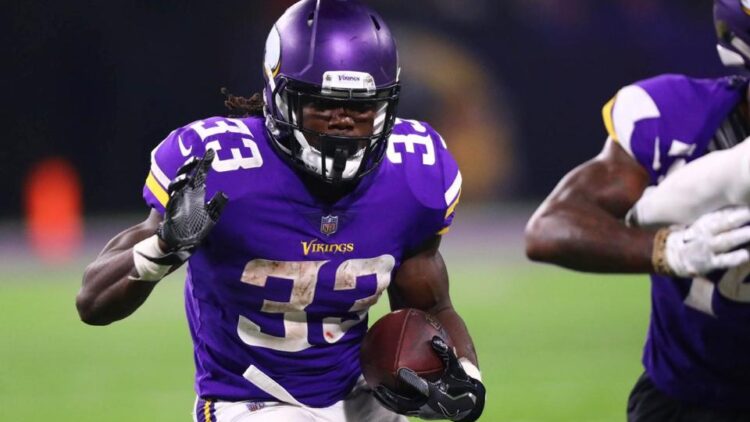 This is the second article in a series that will break down where the Minnesota Vikings rank at each position within the NFC North and ultimately decide which NFC North roster is the most talented.

The running back position has changed as much, if not more, than any other position in football over the past decade. Rarely do teams employ a “bell cow” runner and it’s even more rare that a player will stay on the field for all three downs. Instead, running back committees are becoming the norm in today’s pass-heavy NFL.

The NFC North is not shy on running back committees. In fact, one could argue that we only have evidence of one player in the division who has truly shown the ability to perform while hauling 30 carries in a game (and he wears a navy blue and orange uniform).

Therefore, ranking the NFC North by running back is based on more than just a team’s listed starter on the depth chart.

Before getting started with the running backs, I remind readers of the points standings following the quarterback rankings. Shockingly (not really), Green Bay is out to the early lead.

The Bears undoubtedly boast the best 1-2 punch at the running back position in the division. Jordan Howard is absolute workhorse and has shown in just two seasons that he can carry the bulk of ground work for 25-30 carries if needed, which is quite valuable when trying to develop a young quarterback such as Mitch Trubisky. Howard has eclipsed 1,000 yards with ease in each of his first two seasons and earned Pro Bowl recognition as a rookie in 2016. He’s already up to 2,455 career rushing yards on an efficient 4.6 yards per carry.

Tarik Cohen represents the second half of this dynamic duo. What the 5’6″, 180-pounder lacks in size he makes up for in tremendous athleticism. Cohen fulfills all of the roles Darren Sproles performed so well earlier in his career. Running routes from the slot, receiving screens, returning kicks and punts and carrying the football — whatever you need, Cohen can probably do it.

Despite losing Jerick McKinnon in free agency to San Francisco, Minnesota comes in at No. 2 in the divisional running back rankings thanks largely to the anticipated return of sophomore standout Dalvin Cook. The 2017 second-round pick’s production was on a stellar pace prior to a devastating knee injury mid-way through Week 4 that ended his season. He accumulated 354 rushing yards (4.8 per carry) and a pair of touchdowns in three and a half games.

Cook isn’t the only notable returning ball carrier for Minnesota. Latavius Murray assumed a workhorse role in a few games last season, recording 20 or more carries in four games. He tallied 842 rushing yards and eight touchdowns (seven in the final seven games) and, along with fullback CJ Ham, solved Minnesota’s short-yardage running game issues that plagued the offense in 2016.

Thus far, the rankings have been composed of a couple of dynamic duos. The Packers, however, bring a three-headed monster to the table in Ty Montgomery, Aaron Jones and Jamaal Williams. Each has gained reputable experience as a starter in the NFL.

Jones was Green Bay’s most efficient runner a season ago, averaging 5.5 yards per carry in 12 games (and four starts). However, it was Williams who claimed the title of rushing leader for the Packers last season with 556 yards (to Jones’s 481), though it took Williams nearly twice as many carries.

Meanwhile, Montgomery figures to factor in plenty on third downs and passing situations for Green Bay. He is arguably the best pass protector of Green Bay’s three experienced backs and, as a former wide receiver, knows a thing or two about running routes.

The NFL’s last-ranked rushing offense in 2017 does not have the poor running back talent suggested by that statistic. However, it does rank last in the NFC North. Detroit has struggled the past few years to find a running back it can rely on to carry the bulk of carries if necessary, and has especially struggled to find a consistent between-the-tackles runner.

Ameer Abdullah started 11 games for Detroit last season and managed just 3.4 yards per carry as the Lions’ primary ball carrier. Many have critiqued Abdullah for his lack of size as a workhorse runner, and those criticisms proved valid in 2017.

Theo Riddick’s position is technically running back in the program, but he plays more receiver than running back. He’ll often line up in the slot and exploit mismatches against linebackers and is clearly talented when used for his pass-catching abilities. However, his ball-carrying leaves much to be desired.

Recognizing the need in the backfield, Detroit added LeGarrette Blount (free agency) and Kerryon Johnson (draft) this offseason to bolster the between-the-tackles ground game. Each provide tremendous upside to improve production from the running back position.

Detroit hasn’t had a 100-yard rusher in a game since like World War II so, I mean, any addition was certainly worth a try. And they could have done worse than Blount and Johnson.