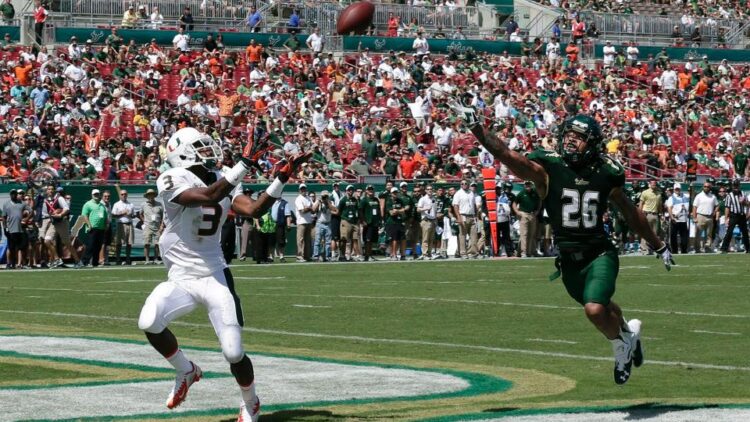 The team at Vikings Territory has been busy working to get to know each of our newest Vikings draft selections and this week we will give you a chance to learn everything we know about these players through our reintroduction of the “Welcome to the Big Show” series.

Next Up: WR Stacy Coley

Pompano Beach, Fla. native Stacy Coley is a former four-star recruit once ranked by ESPN as the No. 4-ranked wide receiver for the 2013 class. A standout at Northeast High School, Coley was an Under Armour All-American and highly-coveted college prospect. He turned down offers from, among others, Florida, Florida State, Georgia, Louisville, Louisiana State, North Carolina, Oklahoma State, Oregon, Tennessee, Texas A&M, Southern California and West Virginia to become a Miami Hurricane.

Coley continued to produce at the college level, earning multiple second- and third-team All-ACC honors during his statistically impressive four-year tenure. Finished with the second-most receptions (166) fifth-most receiving yards (2,218), fifth-most receiving touchdowns (tie) [20] in Hurricanes history. He is surpassed only by NFL greats such as Reggie Wayne (receptions) and Michael Irvin (receiving yards) while ahead of former All-Pros like Andre Johnson and Santana Moss in multiple key pass-catching categories.

He pursued a degree in Liberal Arts at Miami and was coached by former NFL running back Donnell Bennett at Northeast High School.

TALE OF THE TAPE

Stacy Coley is a lightning quick athlete with the ability to take the top off defenses. While he may struggle to create separation at the line of scrimmage in the NFL, Coley made a living off leaving defensive backs in the dust with crisp breaks at the stem of his routes as well as with the ball in his hand in the open field.

The Miami product isn’t one to total catches at a high rate — though he was one of and potentially the go-to option for quarterback Brad Kaaya in college — but he makes the most out of every touch whether it be a home run ball on a 9-route or taking a quick slant the distance with excellent vision and decisive cuts.

He will have to beef up a bit to handle press coverage on a consistent basis in the NFL and prove he does, in fact, have a deep passion for football, but, at the very least, Coley is capable of putting his stamp on games periodically as a rookie with high per-catch average performances.

Matt Miller – Bleacher Report: “Stacy Coley is a versatile receiver who can bring different elements to an offense. He can play in the slot and out wide, winning versus both press and off coverage. He is a smart football player who settles in zones nicely and has good stick knowledge. He gets good separation downfield and tracks the ball nicely over his shoulder. He runs a good comeback, driving back to the football and catching it with soft hands. Coley runs good routes and uses his past successes as fakes to create separation on future routes. Coley has the deep speed—he ran a 4.45-second 40-yard dash at the combine—to beat people deep as well as turn the ball upfield after he catches it. He has speed, elusiveness and vision, and he is a threat to hit a home run on every play. He shows an ability to adjust to an underthrown ball and has good body control near the sidelines. Coley also gives great effort blocking; he will run downfield to try to help spring a teammate or hold his own on a screen pass versus a defensive back. Though Miami stopped using him two years ago on returns, Coley does bring return ability. He averaged 24.3 yards per kick return with a touchdown and 13 yards per punt return in 2013 and ’14.

Durability is an issue for Coley as he has a history of injuries. He has had knee, hip, hamstring and shoulder issues in his career. Coley needs to get physically stronger as contact can affect his routes both at the line of scrimmage and down the field at the top of his routes. He isn’t comfortable catching the ball in traffic, leading to dropped and incomplete passes. Coley is a fast, elusive receiver but lacks strength once he is hit; he will not get much hidden yardage.”

Lance Zierlein – NFL.com: “Might lack the release ability and play strength to line up outside. Best-suited as a vertical slot receiver who can stretch the field and uncover underneath thanks to athleticism and burst. Raw and might not have the football character necessary to make a dent in the league. However, he has the athletic traits that could make a viable slot option with big-play potential. Durability and ability to contribute on special teams are likely essential.”

Dane Brugler – CBS Sports: “Like former teammate Phillip Dorsett (Indianapolis Colts’ first-round pick in 2015), Coley is a speed demon who projects best as a vertical threat and returner at the next level. The junior possesses a lanky frame (especially in his lower body) that could lead to concerns about his durability and he isn’t the most natural hands-catcher. However, Coley tracks the ball well over his shoulder, shows patience and vision to set up his blocks and accelerates smoothly.”

Walter Cherepinsky – Walter Football: “During the 2016 season, Coley had 63 receptions for 754 yards with nine scores. He played well for Miami and earned an invitation to the East-West Shrine. He had a quality week in St. Petersburg. Coley could have produced more for the Hurricanes, but quarterback Brad Kaaya had some inconsistent play and struggles during the 2016 season. Coley ran well at the combine.”

Stacy Coley Response: “I’m just honored to be a Viking,” he said. “I’m just so thankful and honored that [Minnesota] took a chance on me. [They] won’t regret it.”

Rick Spielman Response: “He has tremendous speed. He can play in the slot, he can play outside and he always has kickoff return ability. And he makes big plays.”

The initial expert analysis for Minnesota’s selection of Stacy coley was generally positive and intrigued by his upside potential:

Mark Dulgerian – NFL.com: “Coley is another field-stretcher for the Vikings offense. The talent is there to earn a rotational role, but he’ll need to show coaches he wants to compete early on if he’s going to stick around”

Matthew Coller – 1500 ESPN: “You don’t have to look very far to find long-shot receivers that have worked out for the Vikings. Their two starters are a fifth-round pick and undrafted free agency. Coley is another ya-never-know pick, who runs a sub-4.5 40-yard dash and flashed deep receiving ability, catching nine touchdowns for the ‘Canes. There are questions about his commitment to football, but nobody in the seventh round is without concerns.”

Steve Muench – ESPN: “Coley has the speed, athleticism and ball skills to develop into a dangerous slot receiver and return man if he gets stronger and improves his route-running skills. His work ethic and football character have been questioned though, so he may never realize his upside.”

Coley was the second wide receiver selected by the Vikings, but he offers a slightly different dimension than fifth-round pick Rodney Adams. His fundamental receiving skills (route-running, route depth, soft hands, etc.) are considerably more polished, making the former Hurricane the more likely candidate to impact the game on the offensive side of the football.

His selection, while it by no means assured Coley a 53-man roster spot, may have subtly put Jarius Wright on notice, as the Miami product offers a similar array of talents and greater overall potential if he can add enough mass to be an effective outside receiver. He plays the game with a chip on his shoulder, drawing an intangible comparison to a list of tangible skills that compare well to former California and current Tampa Bay Buccaneers wide receiver DeSean Jackson.

Jackson, however, would represent the ceiling for Coley, who — given the multitude of question marks surrounding both his football persona and if his current size will translate to the NFL — is both figuratively and literally a boom-or-bust pick for the Vikings.

If he booms, however; watch out if Coley faces man-to-man coverage without safety help over the top.

WELCOME TO THE BIG SHOW