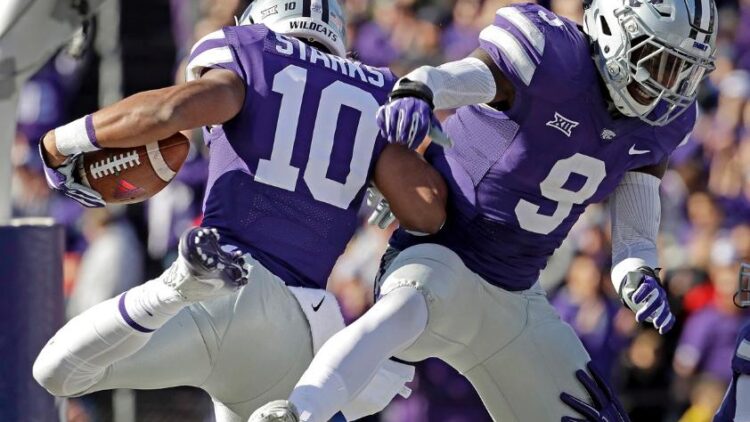 The team at Vikings Territory has been busy working to get to know each of our newest Vikings draft selections and this week we will give you a chance to learn everything we know about these players through our reintroduction of the “Welcome to the Big Show” series.

Next Up: LB Elijah Lee

Blue Springs high school graduate ‘Elijah James Lee’ was a two-time recipient of the Buck Buchanan Memorial Award given to the best linebacker in the top two conferences in both Kansas and Missouri. The Missouri native and three-star recruit ultimately committed to Kansas State, turning down offers from Nebraska, Iowa and Indiana in order to become a Wildcat.

He was a two-year started who played in all 39 games throughout his three-year collegiate tenure. One of only two athletes two win the Buck Buchanan Memorial Award twice, Lee’s high school success translated well to the college ranks, earning himself a case full of hardware including a First-Team All-Big 12 nod during his final season at Kansas State.

Lee grew up alongside four siblings and remains in pursuit of his business degree.

Note: Did not receive an invite to participate in the NFL Combine.

TALE OF THE TAPE

Lee lacks the polish of an early-round prospect, but his ceiling could very well be relatively similar as a result of his well-rounded and expansive skill set. The former Kansas State linebacker’s straight-line speed and lateral quickness all stick out like a sore thumb. Lee plays extremely fast and instinctually, ranging sideline-to-sideline and shooting gaps in run defense or sticking to slot receivers in downfield man coverage.

He also has raw play-making talent, as Lee has excellent ball skills and enough thump to pack the stat sheet with interceptions, pass defenses, forced fumbles and fumble recoveries. Lee is also a threat to turn a simple turnover into a long return or touchdown, as he has comparable breakaway speed to a running back.

Much of Lee’s game will require time to develop in order to be a factor on defense in the NFL, however. He will need to add muscle to avoid being washed out of plays, as Lee already struggled to shed blocks at the collegiate level. Most importantly, the former Kansas State standout needs to become a more efficient tackler. Lee has the ability to close fast and stuff ballcarriers in the backfield, but arm-tackling, lunging and, simply, not wrapping up consistently during college often nullifies the talent that could make him special.

Lance Zierlein – NFL.com: “Elijah Lee’s playing style is more subtle than it is urgent and his upright playing style limits his tackling efficiency and suddenness in his change of direction. Lee has the speed to range all over the field and has the ball skills to warrant consideration on passing downs. If a linebacker coach can get him to play with better bend and get the play speed to match the timed speed, Lee could become an eventual starter in the league.”

Walter Cherepinsky – Walter Football: “In 2016, Elijah Lee recorded 110 tackles with 6.5 tackless for a loss, 1.5 sacks, two interceptions and three passes broken up. The junior is a solid tackler with some athleticism. In 2015 as a sophomore, Lee had 80 tackles with three interceptions. He was a surprise early entry into the 2017 NFL Draft. Lee was not invited to the combine.”

Mel Kiper Jr. – ESPN Insider: “Elijah Lee is a true junior that started his career as DE before moving to OLB in 2015. He started in all 26 games over the past two seasons while finishing the 2016 season with a team leading 110 tackles. He has above-average athleticism and range as a finesse linebacker in space but becomes far less effective when forced to play in tight quarters. Lee needs to continue to add bulk and improve strength but has the potential to add depth as weakside linebacker in a base 43 scheme and contribute on special teams. At this point he projects as a late round developmental prospect.”

Rick Spielman: “Tall, rangy, athletic. When we spent time with [Lee], he was a great kid and those are the type of athletes coaches like to work with, and so we are anxious to get him up here. He has some things to clean up in the run game, but unique in pass coverage and has unique range on the field.’’

The initial expert analysis of Minnesota’s 7th-Round selection of Lee was very positive:

Mark Dulgerian – NFL.com: “Elijah Lee will get camp looks as a special teams contributor, but the Vikings could really use his speed and overall athleticism at the 2nd level of their defense.”

Josh Liskiewitz – Pro Football Focus: “The Vikings have waded into Big 12 waters for a linebacker in the seventh round. Kansas State’s Elijah Lee notched 44 total stops in 2016, which ranked third among all linebackers in the conference. While he struggled in coverage, he added 10 sacks and nine QB hits in the past three seasons for the Wildcats.”

Kevin Weidl – ESPN: “He has above-average athleticism and range as a finesse linebacker in space but becomes far less effective when forced to play in tight quarters. He needs to continue to add bulk and improve strength, but he has the potential to add depth as weakside linebacker in a base 4-3 scheme and contribute on special teams”

VT Readers – Poll: Vikings Territory readers did not specifically grade Elijah Lee, but as a whole, the 7th-round class (Stacy Coley, Ifeadi Odenigbo, Lee, Jack Tocho) was awarded a “B” grade at a 49.22-percent rate and an “A” grade on 25.97-percent of evaluations. And one would have to believe Lee is significant reason for the very high opinion from voters.

Minnesota’s linebacking duo of Anthony Barr and Eric Kendricks are often more than enough for Mike Zimmer to run a successful defensive game plan, as the Vikings coach manipulated and disguised his Nickel coverages well enough to give the opposition fits this past season. When the Vikings were forced into their 4-3-4 Base defense, however, teams — such as the Indianapolis Colts — were able to bully Chad Greenway and Emmanuel Lamur with athletic tight ends especially toward the end of 2016.

The Vikings failed to address their linebackers’ issues against the pass with Ben Gedeon, one of the team’s fourth-round selections. Lee, on the other hand, has the coverage talent and ball skills to be dangerous in an area Minnesota definitively struggled in this past season. If and how quickly the Kansas State product develops as tackler and familiarizes himself with NFL game speed and offensive tendencies will ultimately determine the impact Lee has with the Vikings both as a rookie and beyond.

He should make the 53-man roster out of training camp, as Lee — at the very least — offers has the talent to be an immediate impact player on special teams. That said, however, it remains possible that the former Kansas State linebacker polishes his skills over the next three months and adds enough muscle mass to challenge for a starting weak-side linebacker role.

“I really think that if they’re going to leave Eric Kendricks in the spot where’s he’s at in the middle, then Elijah can have an opportunity to play that weak-side spot where Chad was,” Leber said. “I know it’s crazy to say that Lee could potentially start as a seventh-rounder, but I think that highly of him.”

The high-ceiling seventh-round pick certainly appears to be a quick-study and one to keep and eye on, as he already has the Minnesota Mindset down to tee:

"I can't stand the Packers!"

WELCOME TO THE BIG SHOW