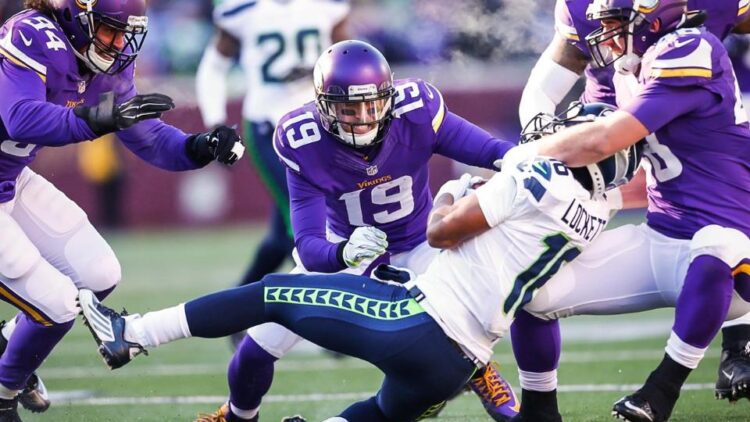 While we try to figure out just where our latest playoff heartbreaker will rank in Minnesota Vikings lore, and some of try to find a suitable nickname for the missed kick that ensured the loss, there also exists an urge to collectively cast our gaze to the future.

One of the first things that needs to be addressed in any offseason are the questions surrounding the current roster and figuring out just which players could end up moving on in the coming months.

As of today, here are the Vikings players set to see their current contracts expire prior to the 2016 season. The list is loosely ranked by playing time and production, so don’t put too much stock into the order in which they appear:

By quite a large margin, Mike Harris was the Vikings most consistent offensive lineman in 2015. That might not be saying much, but I would hate to have witnessed what the unit would’ve looked like with out him. The Vikings can’t afford to take a step backwards at offensive line this offseason (they need to take a few huge steps forwards) and resigning Harris should be a priority near the top of Rick Spielman’s to-do list.

Mike Zimmer milked 62 tackles, 12 deflected passes and three interceptions out of the aging veteran Terence Newman in 2015. While Newman played admirably, it is hard to ignore his age, and the Vikings will probably let Trae Waynes see more significant playing time in 2016 instead of resigning Newman. Of course, if the price is right, the Vikings could certainly do worse than Newman as a reserve option.

It was fun seeing Greenway look somewhat rejuvenated in a 2015 role that was greatly reduced from his previous duties with the Vikings. Still, the Vikings veteran linebacker is no longer the player he once was, and would have to be open to a greatly reduced contract in a reserve role if he wants to come back… and, even then, I’m not sure the Vikings sign him. It is also possible that Greenway retires this offseason.

Often used as the “sixth lineman” in heavy formations, Rhett Ellison has been a dependable and important piece to Minnesota’s offense since they drafted him. Unfortunately, his ability to play in 2016 is now a question mark following his major knee injury in the final week of the season. If not for injury concerns, for which I obviously don’t have the answers for, the Vikings would almost certainly resign Ellison without batting an eye.

Stop if you’ve heard this one before, but it will be interesting to see if Marcus Sherels can once again make the Vikings squad in 2016 and beyond. Sherels is never on the field as a defensive back these days, unless something has gone incredibly wrong, but he remained a valuable punt returner (9.1 yard average) in 2015. I’m willing to bet the Vikings make an effort to bring him back.

The “King of Mankato” will almost certainly be back to training camp this year, given he is restricted, and he could really become an even greater story than he already is if he continues to build off of his 2015’s successes. At the end of the year, Thielen was really starting to look like a legitimate receiving threat, and his development at the position would make things really interesting in terms of depth chart decisions in August and September.

Asiata is pretty much an “as advertised” type of player. He is dependable, a good enough blocker and pass catcher, while his ceiling is pretty low. Adrian Peterson might be the past at this point, but Jerick McKinnon is certainly the future. Asiata is expendable and contract offers will likely reflect exactly that.

Everyone loves Audie Cole. I love Audie Cole. I think the Vikings might be willing to move on, however, prepared to find someone else to fill depth roles within the defense for 2016 and beyond. Cole never seemed to be a favorite with Zimmer’s staff, despite the nice job he has done with limited opportunities, and his season ending injury in early November certainly didn’t help his cause.

Alshon Jeffery aside, Josh Robinson played pretty well for Mike Zimmer in 2014, but injury kept him mostly out of action in 2015. He allowed Seattle’s only touchdown in the Vikings playoff loss, but it isn’t like Doug Baldwin hasn’t made better cornerbacks look like clowns this season. Robinson’s speed and youth make him worthy of a reasonable offer at a position where you can never have too much depth.

Justin Trattou tied Captain Munnerlyn and Harrison Smith with two interceptions on the season. Those were easily his biggest moments of the regular season, but he has flashed plenty of potential, looking like a potential rotational player in Zimmer’s defense. Don’t be surprised if he is brought back to provide depth and compeition at the defensive end position.

If the Vikings are going to keep using a fullback, then there is no reason not to tender Zach Line as a restricted free agent, and I bet that’s exactly what they do.

The Vikings simply need to upgrade the strong safety spot in 2016. It was the weakest link on the defense in 2015 and it wasn’t even close. Sendejo does a few things well, and he might be worth bringing back to provide depth, but I wouldn’t be surprised if the Vikings just move on without him.

Blanton is not a great option and never has been. His versatility, the ability to also play cornerback, might provide him an advantage in getting another contract but I’m not betting anything on that.

I’m guessing that the Vikings will look elsewhere for defensive tackle depth in 2016. Ellis was a mid-season signing after Shamar Stephen was sent to injured reserve with a toe injury. With Sharrif Floyd, Linval Joseph, and Tom Johnson all likely to return it would make more sense to target younger linemen that can be developed.

A preseason injury caused Matthews to miss the entire season and I would be surprised if he returns to Minnesota.

The age and talent of Jason Trusnik will not get anyone excited.

He’s young and cheap. There is zero reason to send Bykowski packing prior to training camp, but we’re in deep trouble if he sees the field during meaningful action.