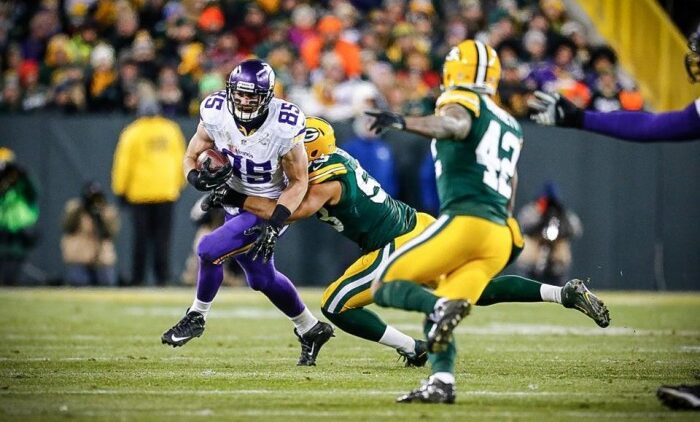 After celebrating their NFC North Division title victory over the Green Bay Packers last evening, the Vikings were brought back down to earth by some discouraging news today. Minnesota tight end Rhett Ellison tore the patellar tendon in his right knee against the Packers and will not be able to participate in any Vikings postseason games in this season.

Not only is Ellison unavailable to play for Minnesota in this year’s playoffs, his injury will require surgery and a recovery time of at least six months. Tough time for Ellison to have this type of injury, considering how well he played during the regular season.

Not known as a big stats guy (11 catches this year), Ellison was productive for the Vikings in 2015 in ways that likely went unnoticed to the casual football viewer. His excellent blocking ability in Minnesota’s rushing attack helped propel Vikings running back Adrian Peterson to capture his third career NFL rushing title this season.

Finding a way to run against the Seahawks (NFL’s top run defense in 2015) in next Sunday’s first round playoff matchup just became even harder for Minnesota with the loss of Ellison. Vikings offensive coordinator Norv Turner may have to dust off his old bag of tricks in order for Minnesota to have a chance of a successful rushing attack against Seattle next weekend.