VT Question of the Week: Vikings’ Most Favorable Playoff Opponent? 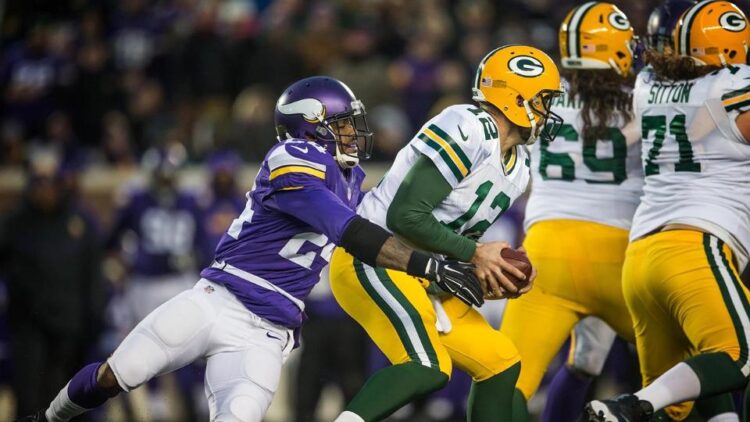 You know the situation by now. The Minnesota Vikings clinched a playoff berth after their resounding victory over the New York Giants last week. Unfortunately, we don’t know who the Vikings will play once the postseason begins in January. Depending on the outcome of Sunday’s games, including Sunday night’s highly-anticipated Packers-Vikings tilt, Minnesota will play one of three opponents in the Wild Card round — the Green Bay Packers, the Washington Redskins, or the Seattle Seahawks.

If the Vikings win on Sunday, they’ll host the Seahawks on either January 9 or 10, per ESPN’s Ben Goessling. A loss gives the Vikings two possible scenarios. The first would require the Seahawks losing to the Arizona Cardinals, which would make the Vikings the NFC’s No. 5 seed and set them up for a first round matchup with the Redskins in Washington. The second would involve a Vikings loss and a Seahawks win, sending Mike Zimmer’s team back to Lambeau for a rematch with the Packers in January.

Knowing these scenarios, I asked the team to share their thoughts on the Vikings’ potential opponents. Specifically, which matchup gives Minnesota the best chance to move past the Wild Card round.

What’s the best matchup for the Vikings in the first round of the playoffs? The Seahawks, Packers, or Redskins?

I have asserted that I think the 2015 Minnesota Vikings have a few fatal flaws that will prevent them from winning three or four consecutive postseason contests. The NFC playoff teams are now locked in and two of those fatal flaws are prevalent among the contenders.

The first is that our offensive line just simply cannot hold up against elite defenses, rendering the offense incapable of meaningful progress on the scoreboard. By most measures, that makes the Redskins the most appealing matchup of the NFC playoff teams. Seattle, Carolina, and Arizona are each in the conversation for the NFL’s best defenses in contrast.

The second fatal flaw is that we can’t seem to beat mobile quarterbacks. For all the Mike Zimmer’s defense is, it struggles greatly with quarterbacks that can take advantage of Minnesota’s aggressiveness and escape the pocket to buy time and/or pick up yards on the ground. I stand by that assertion which means I would like to avoid Russel Wilson, Aaron Rodgers, and Cam Newton. Kirk Cousins is no slouch these days, but I think he provides a strategic matchup that the Vikings defense can exploit by viciously attacking the pocket.

None of these teams will be easy to beat, by any means, and I am very glad that we can say the same for these young Vikings. With that being said, I think the squad matches up best against the Redskins by a mile.

Washington Redskins quarterback Kirk Cousins has the hot hand right now and has the highest completion percentage in the league. He doesn’t need the help of a strong defense or a solid running game. Cousins has the right weapons in Desean Jackson and Jordan Reed to go along with a team that is playing inspired football and ready to ride their wave of momentum.

Yeah, Seattle and Green Bay are tough matchups for the Vikings especially in the playoffs, but if the Vikings want to prove they are up-and-coming, now is the time to prove it. For the Vikings to turn the corner and take a step forward, they need a signature win. Seattle kicked us in the chops pretty good in Week 13, so I’m not looking forward to a rematch.

On the bright side, the Vikings didn’t show their best hand and they played poorly in the tackling and the penalty phases of the game. The Vikings will certainly give the Seahawks a much better game if they meet again. However, it’s the Packers that the Vikings are most ready to do business with. Beating Green Bay twice would be a huge building block for the future and probably the next best thing to a Superbowl Championship.

Certainly the biggest debate of the week in Vikings Territory (see what I did there?). It would have been crazy to think this prior to the season, but I honestly think the best match up for the Vikings is the Packers in the playoffs. Not only are we familiar with the team and the match ups, but something just isn’t right in Green Bay these days and although playing the Pack in the first round would likely mean we would lose to them in week 17, I’d feel the most confident facing a familiar foe.

The argument could be made that heading to Washington would be the easiest match-up, but the Redskins seem to be on the rise like the Vikings and dare I say it, Kirk Cousins scares me a bit. He’s simply playing fantastic football right now. Although the Packers might be the most favorable pairing, I want the North and would roll the dice against Seattle at home a few weeks removed by being absolutely blown out by the Seahawks a few weeks ago.

As well as the Redskins are playing right now, they still have to be the best possible playoff matchup for the Vikings. Washington is winless this season against playoff teams and they could potentially win their division with an 8-8 record. Minnesota’s defense has semi-struggled at stopping the run this year, but the Redskins’ rushing attack is nothing to be afraid of. With Washington’s lack of a running game, the Vikings defense can focus more on stopping the pass and rushing the quarterback.

Speaking of rushing the quarterback, Minnesota’s defense has had its most success this season when facing off against non-mobile quarterbacks. Enter Redskins quarterback Kirk Cousins, who is by far the least threatening on the run when compared to Aaron Rodgers and Russell Wilson. Yes, Washington does present the best matchup for the Vikings heading in the playoffs. But if Minnesota keeps up with its recent string of impressive performances, they are more than capable of defeating either one of their three possible first round opponents.

Vikings quarterback Teddy Bridgewater recently told the Star Tribune that the team can’t make Sunday night’s game against the Packers “bigger than it is.” But in reality, it’s the team’s biggest game of the season, with major implications hanging in the balance. If the Vikings can win in Lambeau Field and beat Green Bay — who have gone 10-1-1 against the Vikings since 2009 — it’ll be the confidence boost they need to make a deep run in the postseason. And if they lose, it could very well set up a rematch in the first round of the playoffs. Either way, the Vikings are driven to defeat the Packers and get that proverbial monkey off of their back.

The Seahawks have the Vikings’ number, as proven by their dominating 38-7 victory earlier in the season. The Redskins, meanwhile, are an unknown. They’re an excellent team at home and an average team on the road; the Vikings won’t know which team to expect if they do meet in the playoffs. If there’s any familiarity, it’s with the Packers, who Mike Zimmer so desperately wants to take down.  I believe if they do meet, he’ll put his team in the right position to make it happen.