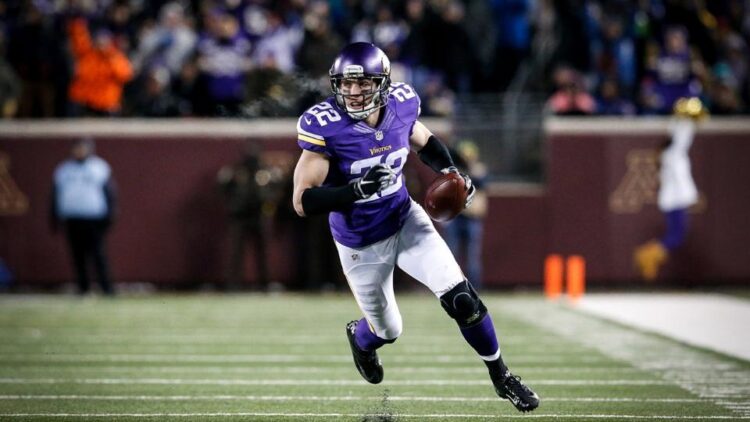 On a frigid Sunday night in Minnesota, the Vikings defense was on fire sacking Eli Manning four times and intercepting three of his pass attempts in route to a 49-17 victory over the New York Giants at TCF Bank Stadium.

The Vikings got on the board first with a 32-yard field goal from Blair Walsh in the first quarter. Walsh accounted for 19 points on the night as he connected on 5-of-5 field goal attempts with two from over 50 yards.

The Vikings took a 10-0 advantage in the second quarter when Teddy Bridgewater found Kyle Rudolph down the seam for a 26-yard touchdown strike. Bridgewater was efficient once again connecting on 15-of-25 pass attempts for 168 yards and 1 touchdown. The Vikings were able to run the ball and control the clock as Adrian Peterson finished with 104 yards and a touchdown on 22 carries and Jerick McKinnon added 86 yards on 7 carries finding the end zone twice.

The Vikings were good in all phases of the game, but Harrison Smith’s 35-yard pick six in the second quarter broke the game open and gave the Vikings a 16-3 lead. The contest was never in question after Smith’s big play as the Vikings defense held the Giants to just 1-of-11 on third downs and 0-of-2 on fourth downs. Chad Greenway led the way with 9 combine tackles while Tom Johnson added 4 tackles and 2 sacks. Smith’s 5 total tackles and his fourth career interception returned for a touchdown capped off a brilliant defensive effort. Andrew Sendejo and Captain Munnerlyn also intercepted Eli Manning.

The Vikings are 10-5 and set to battle the Green Bay Packers for the division title next week.