The Vikings finished their 2022 season with a loss in the first playoff game against the New York Giants. Overall, the season was a success, but the postseason was a disappointment.

Quarterback Kirk Cousins has been the team’s signal caller since 2018. His performance level is a hot debate topic among fans. The numbers say he’s played at a high level for most of his Vikings tenure. However, he is turning 35 years old soon, and the organization might look in a different direction at some point soon.

Adofo-Mensah was asked if he hopes to extend Cousins’ contract just like he did last year.

It’s our expectation that he’ll be our quarterback. I can’t say exactly how that would look. We have everything at our disposal. We consider all those things just like we will with everybody else on the roster.

Cousins is under contract for one more season. Not extending him would send him in a contract year. Depending on the quarterback’s performance in 2023, not locking him up for longer could be a good or a bad thing, as the team is not stuck with the quarterback if he isn’t playing well, but his demands could rise if he’s playing at a high level.

Adofo-Mensah didn’t rule anything out. Adding a quarterback through the draft is always an option and considering Cousins’ contract and age, it may be a smart way to grab one this year.

O’Connell was also asked about Cousins.

...When I envisioned this offense and his fit within the offense and then watching him really flourish throughout the year – coming to live in big moments, his toughness, his durability, his ability to go out there each and every week and put our offense in optimal situations through his play, his leadership, his ownership of the offense…

I thought his growth from the beginning to the end and our personal dialogue week in and week out with the gameplan. I’m excited for not only Kirk but a lot of our players that will now have a year in the system. We can build off of that, we can evaluate all the things that we did well, things we need to improve.

Cousins finished the year with classic Cousins numbers, 4,547 passing yards, 29 passing touchdowns, and 14 interceptions. Overall, his numbers look slightly worse than in recent seasons but learning a new system definitely played a role in that.

We’re going to want to have a clear-cut plan of where we want to take our offense. Continue to grow roles and responsibilities within it and I think Kirk will be leading the charge on that with his ability, now one year in, to know there’s not so much learning that needs to take place of the base way of doing things. Now we can tweak, adapt, evolve, and continue to allow him to feel as comfortable as possible of what we’re asking him to do and I feel that’s where our real growth can come.

Cousins never has had the same playcaller for two consecutive seasons, so the expectations are high for the veteran passer. He will be the Vikings starting quarterback in 2023, but after that, everything is on the table. 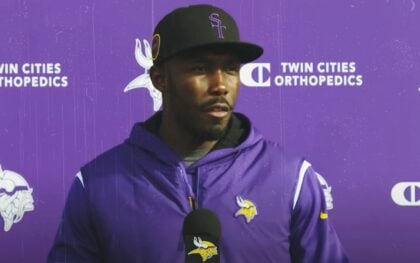