Justin Jefferson’s 2022 regular season was among the best in NFL history. He broke all kinds of Vikings records, and some of his numbers are just mind-blowing.

The third-year player also became the first Viking to lead the NFL in receiving yards. He led the league in receptions as the third Vikings player ever, too. The first two were running back Chuck Foreman in 1975 and Cris Carter in 1994.

Hutson is considered one of the greatest receivers ever in some fans’ eyes, as he changed how the league viewed the passing game. However, his name is mostly forgotten by today’s generation.

He is credited with the invention of many modern receiving routes. When he retired in 1945, Hutson held all big receiving records in football. His career numbers were about twice as much as the next closest competitor. He also became the first 1,000-yard receiver ever in 1942, when he had 1,211 yards. Ray McLean was second in that season with 571.

The Packers won three NFL championships with him, and his number was the first retired by the storied franchise way before the Vikings were even founded.

Knowing all of that, it is an outstanding feat to break a longstanding record held by Hutson. Since coming into the league in the 2020 NFL draft, Jefferson is leading the NFL in receiving yards by a wide margin. His 2022 season yard numbers are the sixth most in a season ever.

Jefferson came short of breaking the single-season record in NFL history held by Calvin Johnson with 1964 yards. The record is probably a big goal for the wideout in his fourth season. He needs 688 yards in 2023 to become the player with the most receiving yards in the first four career seasons.

His next goal will be a playoff win — this weekend versus the New York Giants — which would be the first one in his career. 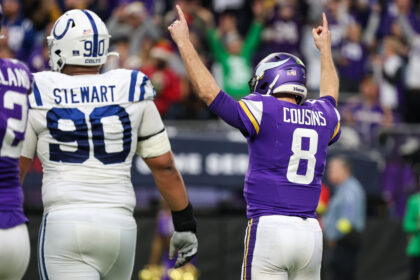 Also Read:
Kirk Cousins Is a Hall of Famer