Reactions after Vikings Beat Bears in Another Comeback Win 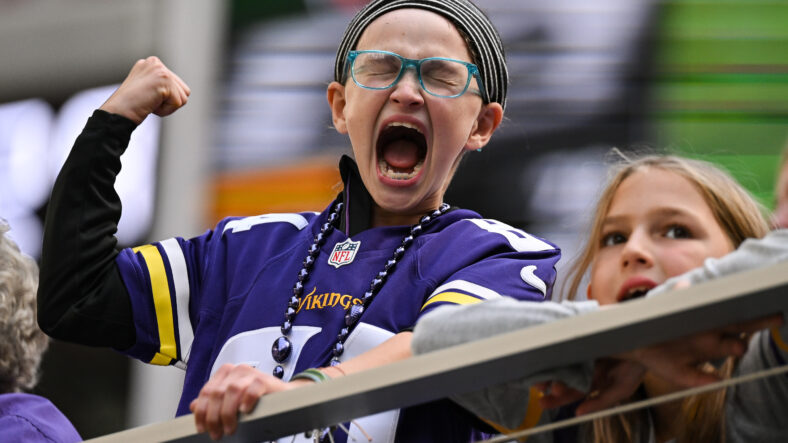 Nothing is boring about this year’s Vikings, who looked unstoppable in jumping out to a 21-3 lead over the Bears on Sunday before having to rally for a 29-22 win that came down to Cam Dantzler taking the ball from former teammate Ihmir Smith-Marsette with 1:12 remaining.

With their third straight come-from-behind win, the Vikings took over first place in the NFC North at 4-1 with a perfect 3-0 record in the division. They’re now one game plus a head-to-head win ahead of the Packers, who were upset by the improved Giants in London. Now it’s off to play in the South Florida heat and face a talented Dolphins team that began the season 3-0 but has lost two straight with QB concussion issues a major problem.

The Vikings are now 3-0 in one-score games after going 6-8 last year in the close games, so they continue to win the kind of games they lost last year.

Reactions after Vikings Beat Bears in Another Comeback Win

Here are my other reactions to Sunday’s win before a loud U.S. Bank Stadium crowd that witnessed another up-and-down but ultimately winning performance by the Purple:

1. Kirk Cousins was outstanding in the first three drives—as good as we’ve seen him in his Vikings years–as he set a team record with 17 straight completions to start the game. He and Coach Kevin O’Connell wisely got Justin Jefferson involved early (4 catches for 55 yards on the opening TD drive). Then the Bears adjusted their coverages, ratcheted up the pass rush, and held the ball most of the third quarter before Cousins threw a bad interception when he tried to force it to Adam Thielen with C.J. Ham wide open as a check down.

Cousins regrouped and led the winning 17-play, 75-yard fourth-quarter drive, which he aided on the ground with a 3rd-and-5 scramble for a key first down and sneaked one yard for the final TD (aided by a good push in the back from a rapidly improving tackle Christian Darrisaw).

2. Jefferson is obviously ultra-talented as a receiver, and he flashed his passing skill on a slick throw-back across the field to Dalvin Cook for a 23-yard gain on 3rd-and-10 in the second quarter to set up Minnesota’s third TD. Chicago played soft single coverage in the first half on J.J., and he burned them for 10 receptions and 138 yards by halftime.

3. Kudos to O’Connell for his aggressiveness out of the gate in this game. He opted to go on offense after winning the toss, and the result was a 12-play, 86-yard touchdown drive with a great mix of run and pass. Running the no-huddle offense early also effectively kept the Bears from substituting on defense. And converting 12 of 15 third downs was a great change for an offense that had been at a 31% rate going into this game.

4. The Vikings offensive line and tight ends did a good job in keeping Robert Quinn and Roquan Smith (the Bears top two front 7 defenders) from making a significant impact.

5. Outgaining the Bears 429-271 in total yards, along with a 37-23 minute edge in time of possession, showed this game should not have been so close. The lull on offense and defense from the middle of the second quarter until the middle of the fourth quarter almost cost the Vikings the game. Not to say the Vikings relaxed, but they know big early leads are rarely safe in the NFL. Credit the Bears for not checking out when down 21-3, and Justin Fields played very well in leading the Bears back into the game with 19 unanswered points while the Bears D stepped up too. The Bears offense will be scary in the future if Fields continues to improve and the Bears get him more receiving talent beyond Darnell Mooney, along with a better O-line.

Penalties were a problem for the Vikings (7 for 70 yards, the first time this season that the Vikings have had more penalties than the opposing team). And on defense, I did not like the single coverage on Mooney, the only threat at wide receiver. He made the amazing 39-yard one-handed reception against slot corner Chandon Sullivan that changed the momentum in the game as the Bears went on to score on a too-easy 9-yard run on a draw play by David Montgomery.

6. The Vikings pass rush is still spotty, with only two sacks on Fields, who came into the game with 16 sacks against him over the first four games. The defense was better against the run than in recent games but still must be better against running QBs, as Fields had 47 rushing yards and made several first-down runs as the Bears rallied (this after Jalen Hurts was a problem in the Philly loss). The pass rush and handling running QBs must improve with Miami and their talented receivers next up, and then super-quick Kyler Murray coming to town after the bye.

7. He’s an unlikely hero considering his inconsistency in the past, but Cam Dantzler had his best game as a Viking and is emerging as a big-play cornerback. Credit Dantzler and his mentor Patrick Peterson who has been in his ear to get the talented third-year man to be a solid pro. The most impressive thing to me about his game-saving strip of Smith-Marsette is how he got back up off the ground with a second effort to make the play. He also was involved in a key penalty when the beleaguered (on Sunday) Smith-Marsette was called for pushing Dantzler in the back, negating a 52-yard TD run by Fields early in the fourth quarter to help hold the Bears to a field goal on that drive (Dantzler called it a good acting job on his part to throw his arms up in the air).

8. The special teams have been great this season until the Bear game. There was a missed 53-yard field goal by Greg Joseph at the end of the first half and a blocked field goal in the third quarter, both of which would’ve slowed the Bears momentum. Ryan Wright has been excellent this season, but he had a 15-yard shanked punt to set up the Bears at midfield for their first TD drive. There also was a 24-yard kickoff return allowed. Joseph was outperformed by Bears kicker Cairo Santos who was 3 for 3 on field goals, including 50- and 51-yarders.

Bottom line is another big win in the division and the realization that the Vikings must be more consistent in all areas, as expressed by O’Connell in saying, “Our team continues to show levels of grit and resiliency that should bode well for us. Don’t necessarily think we found that four-corner of consistent ball we’re looking for, which is not easy to do in the NFL. That’s okay, we’re still going to work tirelessly to have that.” And as Cousins added, “The challenge moving forward is how can we pull away if we get ahead.”

1. The first NFL head coach firing came down on Monday, with Carolina giving the pink slip to Matt Rhule after the 1-4 Panthers fell 37-15 at home to the 49ers. Rhule could not find a solid quarterback to lead the team during his two-plus years with no playoff appearances.

2. The Vikings weren’t the only team to blow a big lead on Sunday. The Packers led the Giants 10-0 and 17-3 before getting outscored 17-2 in the second half of their loss to the Giants in London. The Bucs jumped in front of Atlanta 21-0 before the Falcons made it close with a 21-15 final score.

3. The Eagles stayed unbeaten at 5-0 with a 20-17 win in Arizona that came down to a missed 43-yard field goal by the Cardinals with 22 seconds left. They lead the suddenly best division in the NFL — the NFC East that, for the past few years, has often been called the NFC Least. Dallas is 4-1 after beating the now 2-3 Rams in L.A., who are surprisingly struggling on offense. And the Giants are the early surprise team in the league with their 4-1 start. Dallas at Philly in a big matchup next Sunday night after the G-Men host the AFC North-leading Ravens (3-2) earlier in the day.

4. The Vikings will be closely watching the Miami QB situation going into next Sunday’s game. Will starter Tua Tagovailoa or backup Teddy Bridgewater come out of concussion protocol to start, or will the Dolphins be forced to again go to third-stringer Skylar Thompson, who had a couple of turnovers in Miami’s 40-17 road loss to the Jets?