Why Expectations for Lewis Cine Should Be High 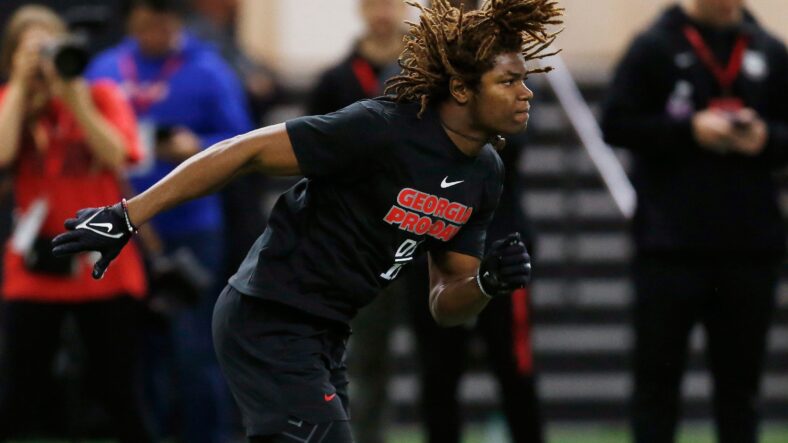 All fans of the Minnesota Vikings should have high expectations for their first-round selection, Lewis Cine. The Georgia Bulldog was the player new general manager Kwesi Adofo-Mensah targeted in the draft, and he was very happy when he made the call.

Safeties are rarely drafted in the first round nowadays because the position is not viewed as a “high-value position,” unlike quarterback, cornerback, offensive tackle, and wide receiver. However, teams get significant contributions from rookie safeties. The learning curve is different for different positions, but it seems easier for safeties to come into the league and play at a high level.

We’ll look at the highest-drafted players at the position in the last seasons. No safety was picked in the first round in either of the previous two seasons. However, there were eight of them selected in the second round.

The first safety selected in last year’s draft was Jevon Holland. The 36th pick played his college ball at the University of Oregon. Holland received a PFF grade of 84.7 in his rookie season and is already in the conversation of the top safeties in the league. His grade ranks him fourth among safeties.

Just seven picks later, the Las Vegas Raiders chose Trevon Moehrig. He didn’t miss a single snap in his rookie season and earned a PFF grade of 72.5, making him the 25th highest rated safety. Both Moehrig and Holland were part of the Pro Football Writers of America NFL All-Rookie Team.

Just like in 2021, no safety in 2020 got the call during the first round of the draft. However, in the second round, five of them were picked. They all made contributions and played really well so far in their young careers.

The Giants opened the run on safeties when they selected the former Alabama player, Xavier McKinney. He missed parts of his rookie year with a fractured foot, but since returning in November 2020, he played marvelously and secured the starting job. He was one of the bright spots on a disappointing Giants team.

Kyle Dugger was the Patriots’ selection. He played over 1500 snaps on defense and special teams in the two seasons with the team. Dugger shows elite athleticism, and despite playing for Lenoir-Rhyne in college, he didn’t need much time to get used to the speed in the NFL. He should be a crucial part of Bill Belichick’s plans for a long time.

Jeremy Chinn became a Panther in that same second round and has shown elite potential early in his career. He is already one of the best safeties at the professional level.

Vikings fans desperately wanted the team to draft Antoine Winfield Jr, but their wishes were not heard. Instead, the Tampa Bay Buccaneers drafted him. In his rookie year, he became a Super Bowl champion, and in his second year, he went to his first Pro Bowl. Additionally, he ranked second among PFF’s safeties in 2021

. The Browns selected LSU’s Grant Delpit. He was the third safety to come off the board. Delpit missed his rookie campaign because of a torn Achilles tendon but played a significant role in his second season in Cleveland and has shown why he was a high draft pick.

Between 2017 and 2019, eight safeties heard Roger Goodell reading their names in the first round. The two selections in 2019, Savage and Abram, didn’t reach expectations. However, both are solid contributors for the Packers and Raiders.

The 2018 draft was a great one for defensive backs. The Dolphins drafted Minkah Fitzpatrick, who is a two-time first-team All-Pro. Derwin James fell to the Chargers with pick 17. James is a former All-Pro and was a Pro-Bowler in 2021. Jesse Bates, the Bengals’ second-round selection, is a 2020 second-team All-Pro and led all safeties with his PFF grade in 2020.

Jamal Adams was one of the best players of the 2017 draft class. He is a three-time All-Pro and one of the best box safeties of all time. The two-time All-Pro Budda Baker was part of the same class and is widely regarded as one of the best in the league. The Jets’ pick in the second round is a good safety, which can be seen in the big contract he signed with the New Orleans Saints. The year before, the Jets used the franchise tag on their star defender.

Marcus Williams, the Saints’ second-round selection of 2017, moved on to become one of the best safeties in the league in his own right. He finished four of his five seasons in the top-10 PFF safety grades. However, most Vikings fans remember him for his infamous contributions to the Minneapolis Miracle, where he missed the tackle on Stefon Diggs.

The former Georgia Bulldog was the first selection of Kwesi Adofo-Mensah for a reason. He is athletic, extremely fast, he can hit hard, and he can cover. Rookie safeties come into the league and instantly play at a high level. The expectation for Cine is to help bring the Vikings’ defense back to respectable levels after two years of subpar play.

The floor of safeties picked in the first round is an average player, while the ceiling is that of a superstar. The rate of complete misses is low. He will learn from Harrison Smith, the six-time Pro-Bowler, which should help him develop. Safeties next to Smith usually look better than they actually are. However, Smith never had a player as talented as Cine next to him, and therefore, the sky is the limit for the rookie. The expectations are rightfully sky-high for Adofo-Mensah´s first Vikings selection, Lewis Cine.

At the rookie minicamp, new head coach Kevin O’Connell handed him the task of being a leader of the other guys around — a task he fully embraced.

“I told him today, ‘Hey, lead this group out here. There’s a reason why you were our first-round draft pick,’ ” O’Connell explained. “He’s got that makeup, and it comes naturally to him to lead by example. But I challenged him, ‘Take the rest of that DB group under your wing. You have Andrew [Booth, Jr.] with you, you have Akayleb [Evans] and some guys there that we are going to count on to compete.”

O’Connell added that he does not plan to hold his rookie back when the veterans are part of the practices next week. It shows that he trusts Cine and has high expectations for him and wants him to play a big role in his rookie campaign for the Vikings.