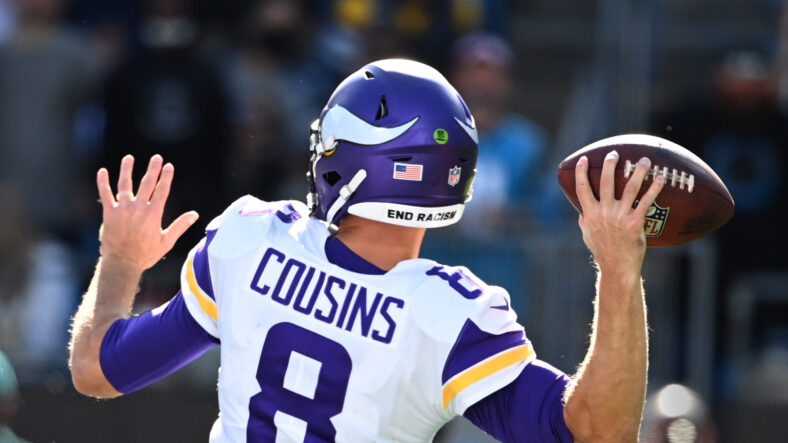 Most would agree that Kirk Cousins’ strength is his accuracy. He’s an experienced signal caller in the NFL and has some flaws.

However, teams can do much worse at the most critical position in the sport. While the Vikings failed to reach more than just one playoff win in the last four years, it has to be acknowledged that the team around him hasn’t always been great. Struggling defenses and offensive lines dominated the organization in the last couple of years.

Of course, he hasn’t been perfect. For example, he failed to play well in a few crucial games. Last year those were the losses against the Cowboys and the Browns. The offense led by him wasn’t good enough to win the games. All QBs have a few bad games mixed in every year, so that shouldn’t be a death sentence for teams. For the Vikings in the last two years, he almost had to be flawless for the team to win.

Whenever he wasn’t sharp, it was extremely unlikely for the Vikings to win football games. Of course, some would argue that if he would play under a lower cap hit, the team could’ve invested and fixed some weaknesses on the roster. Both sides of the argument are valid, but Cousins played at a high level in 2021 and wasn’t the biggest reason for the underwhelming results.

Warren Sharp broke down the top 10 most accurate passers of the 2021 season on FoxSports.com.

“Cousins had the fourth-lowest percentage of inaccurate passes and had a positive completion rate over expected 2021,” Sharp wrote. “The Vikings’ offense also benefits from Cousins’ ability to avoid mistakes, as he had the fourth-lowest percentage of dropbacks resulting in a sack or interception. A new head coach might be able to help this offense become a top-10 unit.”

Indeed, the Vikings’ offense should be better than their results, as they are loaded with talent. The blame should be spread around. The offensive line has been a disaster for about a decade now. The Vikings invested heavily into the line in recent years but couldn’t fix it so far. It should be a priority, especially if a team pays a lot for a pocket passer.

Some of the blame should be aimed at the direction of offensive coordinator Klint Kubiak. With all those weapons at his disposal, and a good passer, the unit should’ve been more effective. Kubiak was a first-time play caller and went through some rookie struggles. The play calling was too predictable.

Some blame should also go at Mike Zimmer, as he was notoriously advocating for low-scoring games and running the ball. The philosophy was not a fit for the Vikings team with struggling defenses in the last two seasons. Not trying to put games away was why the Vikings were in so many close games. New head coach Kevin O’Connell has the opportunity to change some things, as he’s the head coach with the final say about strategy, and he’ll call plays.

Some blame, of course, should be directed at Kirk Cousins. While he played at a top 10 level by most metrics, he didn’t play well enough in a few games. Especially the inconsistency within games wasn’t great. The offense went through stretches in games where they looked elite just to fall flat in the second half.

One thing is certain. His accuracy is exceptionally high.

“There’s a strong consensus he Vikings QB is slightly above average, but not in the top tier of quarterbacks,” Sharp continued. “As always, with a good supporting cast he’ll be productive, but he’s probably not the type who is going to carry the team to victories.”

Nobody would call Kirk Cousins a tier-1 QB. He doesn’t have the talent of Patrick Mahomes or Josh Allen. However, he can lead efficient offenses, and contrary to Sharp’s opinion, he actually led the team to some victories last year and took a step in the right direction in that department. One example is the win against the Packers.

He dueled Aaron Rodgers, who played great, step by step all game. In some games, he led the teams to victories, and then some teammates blew it, like the game against the Cardinals, where he went against a red-hot Cardinals team with an MVP-level Kyler Murray. Greg Joseph missed a game-winning kick from a short distance.

One thing is clear, while Cousins isn’t the best quarterback in the NFL, he has proven to be a very good one.