Wee Bit of History on the Line for Kevin O’Connell vs. ARI 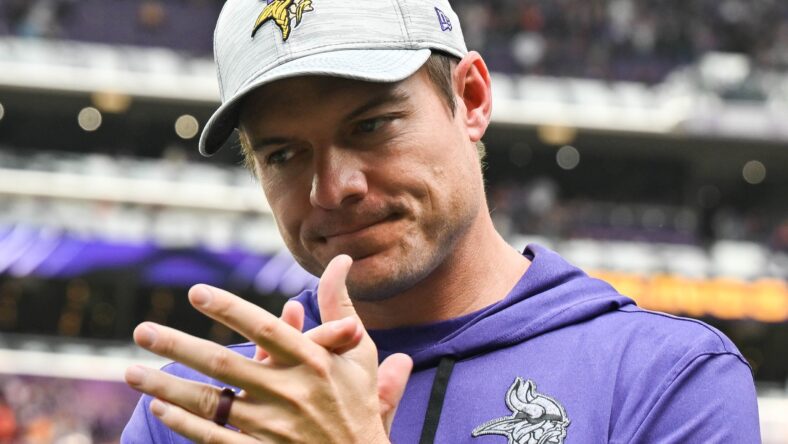 The Minnesota Vikings can climb to a 6-1 record on Sunday versus the Arizona Cardinals, further fastening a hold on the NFC North.

And if that occurs, first-year Vikings head coach Kevin O’Connell will become the first skipper in franchise history to achieve a record as good as 6-1 through seven games.

To date, O’Connell has evenly matched the rookie-head-coach pace of Dennis Green, who led the Vikings from 1992 to 2001. Green started his rookie season with a 5-1 record but lost at home in the Metrodome to the Washington Commanders in Week 8 — a reigning Super Bowl champion quarterbacked by Mark Rypien. The Vikings later lost in the playoffs in 1992 to those same Commanders.

So, O’Connell’s maiden-voyage fate can go two ways. He can either “tie” Green with a 5-2 record through seven games, or O’Connell can top the mark at 6-1, laying claim to the best start in Vikings history under a new head coach.

O’Connell will attempt to make the mini-version of history against a hot-and-cold Cardinals team. Kyler Murray signed a monster contract extension this offseason, and head coach Kliff Kingsbury is in a make-or-break season, much like Mike Zimmer and the 2021 Vikings.

Minnesota could experience the Cardinals team that downed the New Orleans Saints, 42-34, on Thursday Night Football a week and a half ago — or the Arizona squad that could only score nine points versus the Seatle Seahawks in Week 6.

There is no straight line with the Cardinals.

Should the Vikings pull off a victory, first-year general manager Kwesi Adofo-Mensah will continue his vindication tour. When he replaced Rick Spielman in January, several Vikings enthusiasts screamed to high heavens for a full roster rebuild. But Adofo-Mensah declined, instead re-upping with quarterback Kirk Cousins and EDGE rusher Danielle Hunter while onboarding free agents Za’Darius Smith, Harrison Phillips, and Jordan Hicks, among others.

A 6-1 start to the 2022 season, plus the best start ever by a first-year Vikings coach, would emphatically prove Adofo-Mensah knew what he was doing,

The Vikings are 3.5-point favorites to defeat the Cardinals at U.S. Bank Stadium. Arizona hasn’t won a game at Minnesota in 45 years, losing 10 consecutive games at Metropolitan Stadium, the Metrodome, and U.S. Bank Stadium.