Our Staff Prediction for Cardinals at Vikings 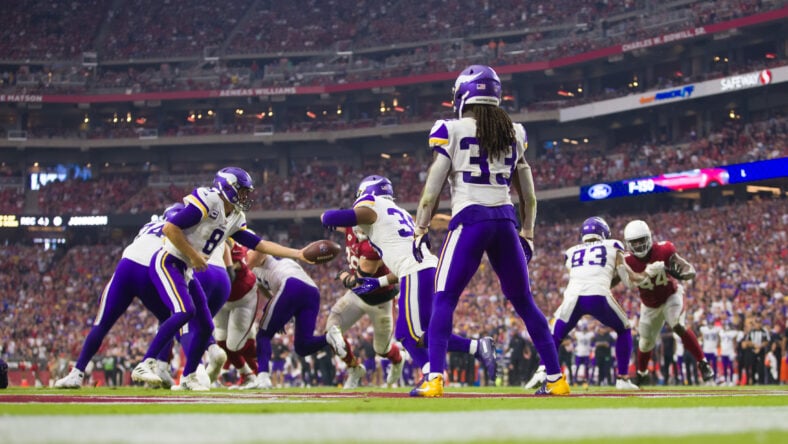 The VikingsTerritory collective staff prediction for the Minnesota Vikings date with the Arizona Cardinals is ready.

The Vikings can hit a 6-1 record this weekend for the first time since 2009, a season that nearly netted a Super Bowl appearance. Minnesota is 17-12 (.586) all-time versus the Arizona Cardinals.

The Cardinals are 3-4 through seven weeks, enduring an up-and-down season with head coach Kliff Kingsbury presumably on the hot seat. The Vikings could face a Cardinals hitting on all cylinders — or the Week 6 team that could only score nine points versus the Seattle Seahawks.

The writers at VikingsTerritory predict the Vikings will win their sixth game of 2022.

All but two of our contributors picked Minnesota over Arizona, evidently confident that the Vikings defense can contain the aforementioned Murray, DeAndre Hopkins, Robbie Anderson, and others.

Here’s how the panel sees the score for Week 8:

Mathematically en masse, we predict the Vikings top the Cardinals by a score of 28-23.

Last week, during the Vikings bye, our writers picked upsets. Sean Borman (NYG over JAX), Dominique Clare (NYJ over DEN), Josh Frey (SEA over LAC), Will Goodwin (SEA over LAC), Mitch Massman (WAS over GB), Adam New (NYG over JAX), and Ted Schwerzler (NYJ over DEN) nailed it. Massman’s call of Commanders over Packers was arguably the most impressive.

The Vikings are currently 3.5-point favorites to defeat the Cardinals in Week 8. The Cardinals haven’t won a game at Minnesota in 45 years.