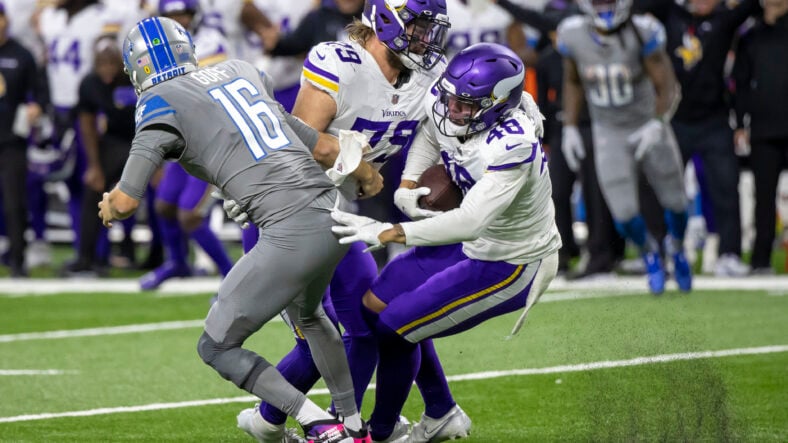 In the aftermath of the Minnesota Vikings Week 6 triumph in Miami, the franchise made a couple of roster moves. The Vikings beat the Dolphins, 24-16, on the road to further their grip on the NFC North.

Dorn was a part of the team’s practice squad until Lewis Cine’s season-ending injury (broken leg) and was added to the active roster accordingly. Now, though, Dorn will live in limbo for a bit while the team waits to see if he clears waivers. If he does — and he likely will — the Vikings are expected to add Dorn back to the practice squad. The franchise is thought to have a high opinion of the 24-year-old.

Dorn became a Viking via undrafted free agency in 2020, and the North Carolina alumnus has been affiliated with the roster in some capacity for three seasons. He’s played in 13 regular season games for the Vikings in three seasons but nary a defensive snap. All of his action to date is special teams contribution. All told, Dorn has participated in 194 special teams snaps since 2020.

The waiver, at least temporarily, may be a preferential nod to new safety Theo Jackson, who the Vikings signed last week. Jackson was a 6th-Round draft pick by the Tennessee Titans six months ago and was plopped on Minnesota’s roster after the Cine injury, a pilfer from the Titans practice squad by Vikings general manager Kwesi Adofo-Mensah.

One thing is certain about the Vikings safeties — and defense on the whole — improvement is needed if the team is to be considered a Super Bowl contender. Showcasing a bend-don’t-break defense has sufficed through six games — the team has a 5-1 record — but Minnesota currently ranks 26th in the NFL per yards allowed to opponents. Without repair, good football teams will eventually punish the Vikings defense for porousness.

Torin Dorn, the father of Myles, played in the NFL for seven years with the Rams and Raiders.

The son, Myles, was teammates with Mitchell Trubisky at the University of North Carolina.