Vikings vs. Dolphins Takeaways from Week 6 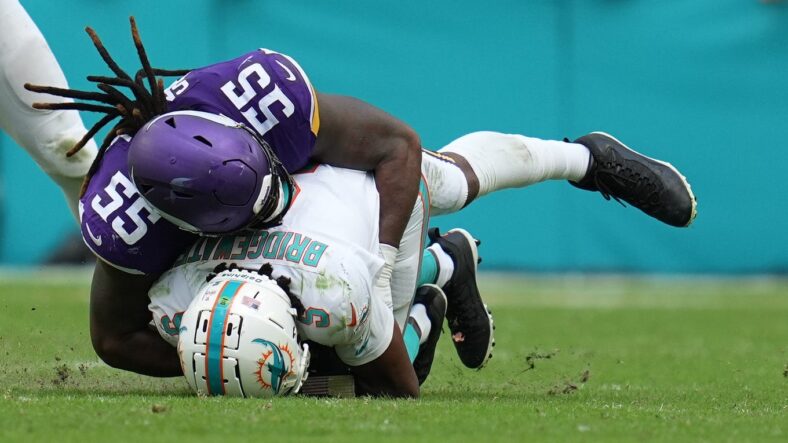 A bad game of the Vikings offense still led to a win over the Miami Dolphins and a subsequent 5-1 record. What were some things that transpired from the game?

Vikings Have a Commanding Lead in NFC North

Six weeks into the season, the Minnesota Vikings dominate the NFC North in the standings. The Packers have a 3-3 record, two games behind the Vikings, and the Bears managed to win just two of the six games. A fan favorite after appearing on HBO’s Hard Knocks, the Lions had a disappointing start to their season and have won just one of five games. The team already had their bye week.

Kevin O’Connell’s Vikings have a multi-game lead over the other teams in the division and have also beaten all of them head-to-head. It does not look like the Bears, and the Lions are ready to go on a big run to push the Vikings off their current division throne. Green Bay and future Hall of Famer Aaron Rodgers struggle to get on track after winning 13 games in each of the last three seasons. The offense is uninspiring and not explosive, and the defense is inconsistent.

The green rivals are the biggest threat to the Vikings because it will always be a mistake to count out Aaron Rodgers. However, he’s looking like a shell of his former dominant self, and even if the Packers start to turn things around, it will be awfully hard to win the division because of the two-win lead and the tie-breaker of the Vikings.

Defensive coordinator Ed Donatell and his unit were on the receiving end of a lot of criticism in recent weeks, but they deserve a lot of credit for the victory over the Dolphins. In the first two drives, the Dolphins were close to scoring before sacks and penalties moved them out of field goal range on both occasions. Skylar Thompson and Teddy Bridgewater were under heavy pressure, especially left tackle Greg Little had no chance against Danielle Hunter or Za’Darius Smith. The Vikings managed to sack the two passers six times and pressured them on most dropbacks.

Bridgewater also threw two interceptions, and Jaylen Waddle fumbled a ball. The Vikings offense had no business winning the game, but the defense carried the team. The run defense was great, the secondary held up, and the pass rush was a constant problem for the quarterbacks. It was the first good defensive game since holding the Packers to seven points in Week 1, and the defense looked like a prime Mike Zimmer unit.

The Vikings famously led the league in three-and-outs in 2021. Sunday’s game will be a big reason when the team finishes with a high number again. To have ten drives with just three plays followed by a punt in one game is unheard of. Those ten drives were different. Neither the running nor the passing game is innocent. It’s hard to break it down to a single problem, as there were multiple issues.

Many miscommunications, a struggling offensive line, and a great defense caused all kinds of trouble. The offense had to get more explosive and consistent compared to last season, and to this point, they haven’t improved in either of the two categories.

The Veterans Can Still Play

Packers fans thought that Za’Darius Smith was no longer a star, Patrick Peterson was just a guy, and Vikings fans wanted Harrison Smith traded. Danielle Hunter is an injury waiting to happen. At the end of the day, all four are playing phenomenal football. Hunter is still getting used to his new position, but he’s improving.

Peterson covered Waddle and Hill, two of the fastest players in the NFL, and he played flawlessly. The veteran cornerback even came away with an interception. Harrison Smith had an interception and forced a fumble picked up by Camryn Bynum. None of the players is getting any younger, but they all turned back the clock on Sunday.

His ten punts tie the third most in a single game in Vikings history. Greg Coleman had 12 in 1982, and Bucky Scribner had 11 in 1989. It was on Wright to flip the field position whenever the offense couldn’t get anything going. His 73-yard bomb that saw Tyreek Hill backpedaling a good 20 yards is one of the season’s most memorable plays. Wright recorded 441 yards on punts, and six of his kicks landed inside the 20-yard line.