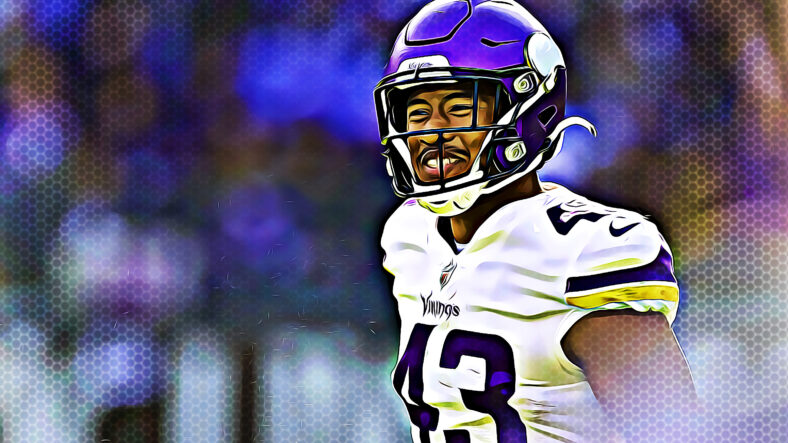 Every year during training camp, it’s exciting to see the newest Vikings — the ones recently drafted who always start the camp as hunters while the veterans are the hunted. The rookie has to usurp the experienced players. In 2022, safety Lewis Cine, cornerback Andrew Booth, and guard Ed Ingram all have a chance to start very early in their careers. They were the picks in rounds one and two.

When the Vikings signed Jesse Davis and Chris Reed, it was likely that one of them would start. It also meant that Wyatt Davis is likely not the future starting guard. Things changed, however, once Adofo-Mensah selected Ingram, a guard, in the second round. A player at that position with that draft pedigree usually starts sooner rather than later.

However, at this point in Vikings camp, veteran Jesse Davis still gets the reps at right guard with the first team. He’s the favorite to go up against Kenny Clark and his Green Bay Packers in Week 1 on September 11th. Davis played for the Dolphins in recent years mostly as a tackle. While he played poorly at that spot, he has shown some promise in the past at guard. He’s probably not playing at Pro Bowl levels but could be a solid starter.

Ingram, the LSU guard, is a powerful player with the explosiveness fans like to see. Not just that, but he also dominates opponents at times. He can be a true bully. Ingram might not start in Week 1 but will undoubtedly start shortly. He still has a lot of time to show coaches what he can do.

The same as in the guard battle applies in the defensive backfield. Patrick Peterson and Cameron Dantzler get the first-team reps, and neither Andrew Booth nor fourth-rounder Akayleb Evans. The latter is a raw prospect with high potential. It’s unlikely that he will start anytime soon. Booth, meanwhile, was a first-round talent and slipped into the second because of injury problems. He’s fully healthy after missing OTAs due to a core surgery. His explosiveness and aggressive playing style are perfect for the new scheme, as he recently said.

Peterson was an elite cornerback for almost a decade, but he’s getting older and regressed to an average level of play. He also struggles with man coverage, like most aging cornerbacks. Dantzler, on the other hand, is still a young player. His first two seasons were a mixed bag. At times, he looked like an All-Pro. At others, he looked like a practice squad rookie. Dantzler was still possibly the best Vikings cornerback in those two campaigns and somehow found a way to land in Zimmer’s doghouse and, as a backup of the liability, Bashaud Breeland.

Booth has a chance to start in Week 1, as he already started camp with some highlight plays. Camp highlights shouldn’t be used for overreactions, though.

The Vikings veteran in this camp battle isn’t really a veteran, as he’s just entering his second year. Lewis Cine was the first draft selection of the Adofo-Mensah era. He won the national championship with Georgia and was the final player selected in the first round. His strengths are his speed and his aggressive play style.

Even if he was a first-round pick, he has to earn the starting spot over a 2021 fourth-rounder, Camryn Bynum. Whenever his number was asked in his rookie campaign, he delivered. Harrison Smith received a positive Covid-test just before the game against the Ravens. Bynum stepped in and played phenomenally. At the end of the day, Cine was the top pick, and the organization needs him to succeed. He’ll probably win the starting job, but he has to earn it, just like Bynum earned the opportunity to compete.

It’s still just the second day of camp, so no overreaction is necessary at this point. The Vikings play their first preseason game on August 14th in Las Vegas against the Raiders, and the depth chart for that game will provide much more intel.