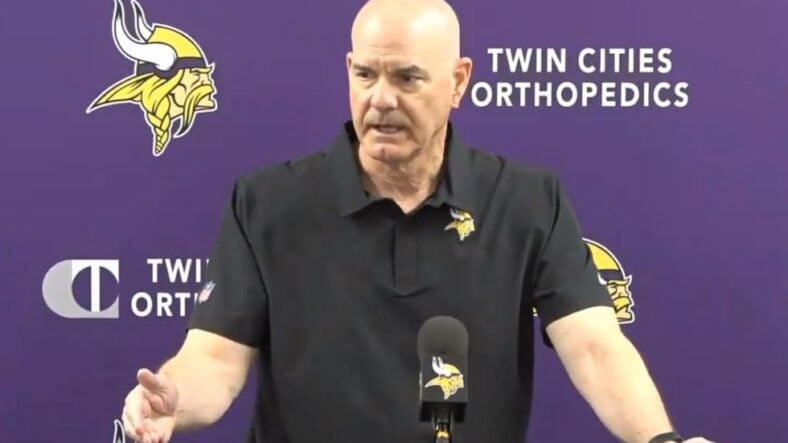 After three weeks of training camp, we know much more about the 2022 Vikings than before the beginning of camp on July 26th. The team lost its first preseason game to the Las Vegas Raiders and will face the 49ers on Saturday. The season opener against the Green Bay Packers will occur on September 11th.

Phillips Is a Steal

The former Bills defensive tackle signed a relatively cheap contract. His salary is $19.5 million over the next three seasons. He has shown that he’s worth much more during camp and the first preseason game. All camp long, Phillips is beating center Garrett Bradbury to the extent that the Vikings are looking for another center.

In limited snaps during the preseason game, Phillips recorded two run stops with an impressive push against offensive linemen. He’s the new force in the middle of the Vikings’ defensive line, responsible for the interior pass rush and stopping the run.

The cornerback had an unsatisfying 2021 campaign in which he watched Beshaud Breeland start over him and get burnt all game long. Whenever he played, he performed at a much higher level. However, he landed in Zimmer’s doghouse and couldn’t find a way out.

The new coaching staff fully trusts the young cornerback, and he’s paying the trust back with good to great play during training camp. Donatell’s scheme fits Dantzler better than Zimmer’s. He’ll open the season as the starter on the Vikings’ defense, and if he keeps playing at that level of camp, he won’t give it to Booth anytime soon.

We might see a more experienced version of the rookie Dantzler when he played great football at the end of the season. He was the only cornerback during camp who sometimes could contain Justin Jefferson.

Bynum Is More than a Backup

At the beginning of the offseason, it looked like the Vikings will give Bynum the reigns of the second safety spot next to Harrison Smith. No other safety was signed by the purple team. However, Adofo-Mensah surprisingly drafted one with his first pick in charge, Lewis Cine.

The first expectations were that Cine would easily get the starting job as a first-rounder, but Bynum didn’t just hand it to the rookie. He’s fighting for his job, instead. Even if Cine ultimately gets the starting nod, Bynum earned the rights to play a lot of snaps in three safety sets or a rotational role.

Danielle Hunter and Za’Darius Smith missed significant parts of the 2021 season with injuries. Hunter even missed the full 2020 campaign as well. Now, they are fully healthy and looking explosive. Hunter recorded a whopping 14.5 sacks in each of 2018 and 2019 before his two injuries. In seven games in 2021, he took down the QB seven times.

Smith, meanwhile, had 12.5 sacks in his last healthy season. Both made plays against superstar left tackle Trent Williams during joint practices. Especially Smith had two big days. The two pass rushers can only be slowed down by injuries. If they stay healthy, the sky is the limit for the defense, as any good defense starts with a good pass rush.

The four defensive rookies all flashed some great potential. Lewis Cine and Brian Asamoah are just flying over the field and are just looking to land the next big hit. Cine might earn a starting spot, while Asamoah will be a valuable backup for Eric Kendricks and Jordan Hicks.

Cornerback Andrew Booth hasn’t been as consistent as Dantzler and, therefore, won’t start. However, he’s a highlight play waiting to happen. Booth’s athleticism and skills are top-notch. He’ll have a big career in purple if his body lets him.

Fan favorite Akayleb Evans is a prototypical cornerback. His size and athleticism are desirable. He’ll need some time to develop, but the Vikings might have found a nice piece for their future defensive unit.

The second-year edge rusher had a disappointing rookie campaign, as he played just 99 underwhelming snaps in a bad edge rushing group. After some fans had already thought about moving on from the young player, he turned it up in camp and looked like a good contributor to the Vikings’ defense. During the first preseason game, he pressured the quarterbacks five times. Jones could challenge DJ Wonnum to become the third edge rusher.

While he is not part of the Vikings’ defense, his camp performance deserves mention. Joseph drilled multiple kicks for 58 yards and even hit a 60-yarder with room to spare. The kicker was so good that some think he was the best Vikings player in training camp. However, he has to prove it in the season, but it looks like the Vikings finally found a good kicker.