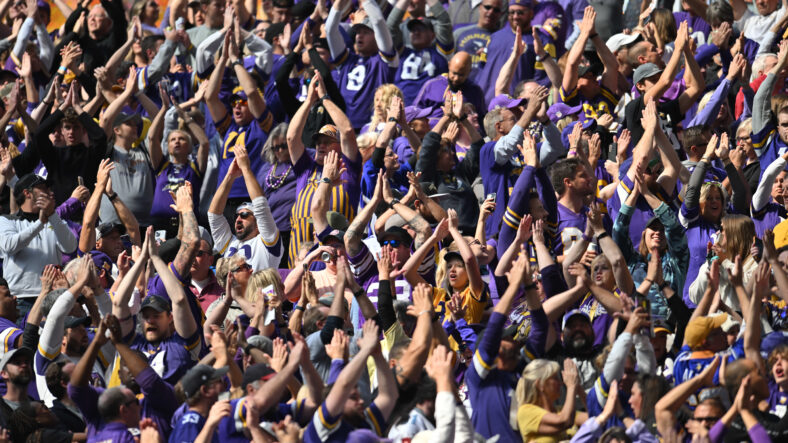 The Minnesota Vikings struggled in long stretches of the game but managed to pull off a comeback to beat the Detroit Lions.

Both teams started their games with scoreless drives. The kicker of the Lions, Austin Seibert, could only hit the uprights on a 48-yard field goal attempt. The Vikings started with a seven-play drive that also ended in a missed field goal. Kicker Greg Joseph missed a 56-yarder. It would’ve tied a Vikings franchise record.

Then, the Lions’ offense started to do some damage and looked unstoppable. Jamaal Williams and T.J. Hockenson each scored a touchdown. In between came a Vikings punt. The offense led by Kirk Cousins had a slow start before they finally got something going in the second quarter.

The offense struggled, especially the passing offense couldn’t consistently move the ball. Dalvin Cook on the ground, meanwhile, had a great day and was able to move the chains multiple times.

Down 14 points, Kevin O’Connell’s offense had to answer to stay in the game. The script flipped now and the Vikings scored a touchdown on back-to-back drives. Cousins found a wide-open Adam Thielen in Detroit’s end zone after marching down the field with an efficient mix of aerial and ground attack. Dalvin Cook scored the game-tying touchdown.

The Vikings had another chance to score before halftime after the defense forced a three and out, capped off by Jordan Hicks defending a third down throw to Amon-Ra St. Brown. The Vikings gained some yardage, but the time expired. Cousins threw a pass in the middle of the field with a running clock and the time expired before Cousins could spike the football.

At halftime, the game was tied. The Vikings got the ball to open the second half but had to punt the ball after a bad drive and back-to-back incompletions. Seibert hit another field goal, unlike Greg Joseph, who missed his second field goal of the day. That was followed by Jamaal Williams recording his second touchdown of the day.

The Vikings, now down ten points, had to make some plays to stay in the game. However, Dalvin Cook fumbled at midfield and the Lions recovered. Cook apparently suffered a shoulder injury. He was quickly ruled out but the injury doesn’t seem to be a long-term issue.

The game turned into a punt festival and the clock was ticking. Around the 10-minute mark of the fourth quarter, the Vikings moved the ball down the field with multiple plays for more than ten yards and multiple penalties against the Lions. Alexander Mattison rushed for a six-yard touchdown and the game was suddenly a wide-open one-possession game.

The score was followed by one turnover on downs by each team and a missed 54-yard field goal from Seibert. The decision to attempt the field goal was a highly questionable one. The Lions were up three points at that point and the conversion on fourth and four would’ve put the game out of reach. Instead, the missed field goal put the Vikings in great field position to start a scoring drive. Kirk Cousins needed just three plays to move the ball 56 yards and one of them was an incomplete pass. Cousins completed two 28-yard throws to K.J. Osborn. Both were perfect throws.

The Lions were down four points after the subsequent extra point with 45 seconds to go. Jared Goff needed 75 yards. Curiously, the situation was almost the same in last year’s matchup of the Vikings and the Lions in Detroit. That time, Goff was able to pull off the small miracle and marched down the field against the struggling prevent defense of Mike Zimmer.

This time, however, Goff was pressured by Za’Darius Smith and threw a prayer deep right into the hands of Josh Metellus. The young safety started the game in place of Harrison Smith who missed the game because of a concussion. The final play was a kneel down from Cousins to clinch the game.

The Vikings pulled off the comeback victory but didn’t play a good overall game. The defense and the offense both stepped up at the end of the game but neither unit played well at the beginning of either half.

Good news can be found in the standings as the Vikings started their season with a 2-1 record and already won two games in their own division, something that will help them at playoff seeding later in the year.

Their next opportunity to show improvements will come next Sunday when the team travels to London to face the New Orleans Saints, which lost two consecutive games.