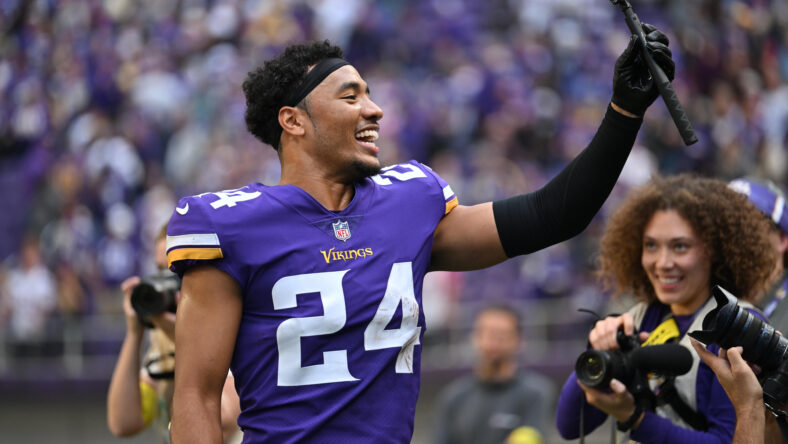 Week 8 is in the books, and the Minnesota Vikings continued their hot streak, making it five wins in a row and moving to a 6-1 record. A 34-26 victory over the Arizona Cardinals got the job done and saw the Vikings take a commanding lead at the top of the north division in the NFC.

Not only are things looking rosy in the division, but the Vikings also have a strong position as the number two seed in the conference. Unsurprisingly, there are a lot of happy Vikings, and all the Vikings player’s reactions to the win over the Cardinals are positive.

Here’s a sample of what different players had to say post-game;

Dalvin Cook was all over Twitter following Sunday’s game, clearly excited after registering his first 100-yard game this season. He had been close several times but finally made that milestone against the Cardinals. However, Cook made it clear it’s the win that matters when asked by the media post-game about a cut on his cheek.

To say Patrick Peterson was fired up to face his former employers would be a massive understatement. Peterson was a man on a mission out there and is clearly still irked that the team he spent a decade with let him go in 2021. The Vikings cornerback addresses talk of him being “washed” after the Vikings win.

The cherry on the cake from Peterson came in the form of a call of duty celebration. The new video game Cardinals quarterback Kyler Murray has received stick about due to his known love of video games. Peterson made light of the celebration and forwarded the following advice for Murray. “Just keep getting better …” And block out the noise.”

It was Vikings tight end Johnny Mundt that got the Vikings on the scoreboard with his first career touchdown. Mundt spent five years with the Los Angeles Rams without ever scoring and only enjoying a limited number of targets. In fact, he now has more targets and receptions this season for the Vikings than he had in his entire time with the Rams. The score was another example of Kevin O’Connell’s inventiveness down by the goal line and a willingness to get all players involved in these critical plays.

Camryn Bynum had a great time with the Vikings cam.

Finally, we have Kirk Cousins with the simple message, Let’s keep it rolling! Something the Vikings will hope to do next week when they go on the road for a matchup with the Washington Commanders.