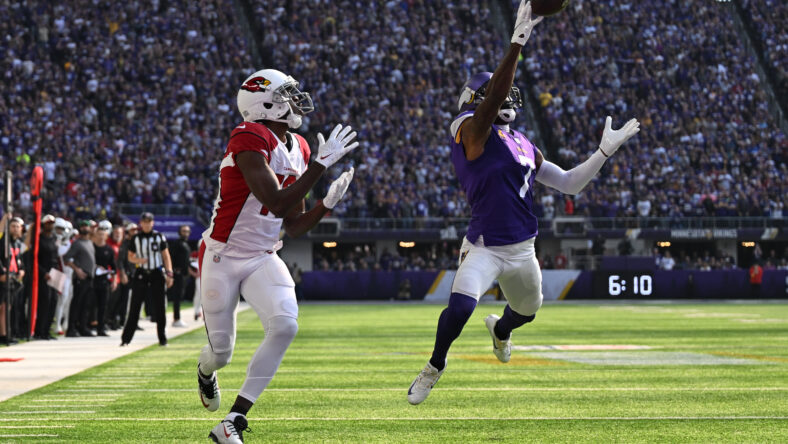 The Vikings fifth straight win — 34-26 over Arizona — followed the pattern of most of their victories this season. It was an exciting game of ups and downs, having to come from behind as has been the case in all of the last five wins, winning the turnover battle (plus-2 to move to plus-6 on the season), and emerging victorious with all three phases making key plays and overcoming shaky moments.

Bottom line is the Vikings are 6-1 and holding a difficult-to-beat 3 ½ game lead in the NFC North with 10 games remaining. The Packers and Bears cooperated by losing as expected in Buffalo and Dallas, respectively, as both division rivals fell to 3-5.

Now the Vikings hit the road for two weeks, facing the Commanders in Kirk Cousins’ first game in Washington since leaving the team that drafted him, and Washington has won three straight to reach 4-4. Then, it’s off to Buffalo to face the consensus top team in the league (sorry, Eagles) that, like the Vikings, sits atop their division at 6-1.

Here are my other reactions to Sunday’s win over a Cardinals team that has lots of talent but makes too many mistakes and was shorthanded on the offensive line:

1. The good news offensively was an excellent running attack (173 yards) that was a point of emphasis this week, according to Coach Kevin O’Connell. Dalvin Cook had his first 100-yard game of the season with 111 yards on 20 carries and 1 TD (and added 30 yards on five receptions). Alexander Mattison chipped in 40 yards and a TD. Cook also showed his toughness with a great blitz pickup to enable Cousins to hit Justin Jefferson for 17 yards and set up Cook’s 4-yard third-quarter TD run.

Cousins added 22 rushing yards that included a terrific 17-yard TD run to the right pylon as he opened the scoring. It’s been impressive to see the Vikings’ success this season on opening drives, as this was their third such start offensively in the last four games and fourth overall this season.

2. Cousins had a rollercoaster day, with several early overthrows and missing an open Jefferson on a couple of occasions. He also held the ball too long on a fourth-quarter fumble when super-quick linebacker Isaiah Simmons strip-sacked him. But Cousins made a gutsy third-quarter completion for 29 yards to a covered Jefferson, who made a key reception on the 3rd-and-5 play when the Vikings trailed 17-14. O’Connell said of the throw: “Give Kirk credit for his willingness to put that ball up to our best player.” The play set up Mattison’s 7-yard TD run for the lead, which the Vikings never relinquished. Cousins threw a perfect 5-yard corner TD pass to K.J. Osborn for the last score in the mid-fourth quarter and made several important completions to Adam Thielen, who combined with Jefferson for 12 catches and 165 yards.

3. The Vikings were 4 of 6 in the first half on third downs and 6 of 13 for the game. They were excellent again in the red zone, going 5 for 5 in scoring touchdowns. “Being 5 for 5 in the red zone goes back to running the football well and being in 2nd-and-5 and then pounding it in,” Cousins said.

4.  It was a rough day in pass protection for rookie guard Ed Ingram who gave up a couple of sacks. The Vikings need to help the youngster when he faces players such as future Hall of Famer J.J. Watt, who beat Ingram on several occasions (and one of Watt’s two sacks was when he got by center Garrett Bradbury). Other teams will follow suit if Ingram doesn’t get more help or quickly improve in pass protection, and Washington has a Pro Bowl defensive tackle in Jonathan Allen, who will surely line up often over Ingram.

But the O-line (especially tackle Christian Darrisaw), tight ends, and receivers, along with fullback C.J. Ham, blocked well in the run game. Tight end Johnny Mundt had a nice day with his first career TD catch (1 yard from Cousins in the second quarter) and some excellent lead blocks in the run game.

5. The defense made key plays down the stretch with second-half interceptions by Harrison Smith and Cam Bynum and a fourth down stop by ex-Cardinal Jordan Hicks. Another ex-Cardinal, Patrick Peterson, had an excellent game with three pass breakups, including a terrific first-quarter knockdown of an end zone shot from Kyler Murray to A.J. Green.

Za’Darius Smith once again was a big difference maker on D with three sacks on the quick and often elusive Murray (who was missing three of his starting O-linemen due to injuries). Smith now has 8 ½ sacks in his comeback season and added four tackles-for-loss, one pass knock-down, and seven tackles. He is clearly playing at an All-Pro level thus far and showed his toughness in shaking off a knee problem in this game.

6. The defense did a good job in run D, allowing the Cardinals only 78 yards, with Murray gaining 36 of those yards, but his long run was only eight yards. The Vikings did give up a lot of yards through the air once again with shaky coverage by Cam Dantzler on Pro Bowl receiver DeAndre Hopkins who was outstanding with 12 receptions for 159, including a spectacular one-handed grab for a 6-yard second-quarter TD while he was well covered by Harrison Smith.

Dantzler is playing much better in his third season, but he (and almost all NFL corners) needs more help from the safeties when locked up on a player such as Hopkins. Or how about having the wily Peterson assigned to star receivers more often as Hopkins’ big day followed Tyreek Hill’s 112-catch, 177-yard day against the Purple in Miami with Peterson not following Hill.

7. Like the offense and defense, the special teams had good and bad moments. Coverage units were solid and produced a huge fourth-quarter turnover on a Ryan Wright punt that was muffed by Greg Dortch, and then Kris Boyd and Kene Nwangwu did a great job battling Dortch for the ball that was recovered by Troy Dye. This set up the Vikings final TD for the 34-26 lead.

The bad was a blocked field goal at the end of the first half on what looked like a low kick on a 56-yard attempt by Greg Joseph. And is Joseph trying to keep the Vikings in one-score games (where they are now 5-0 this season) as he missed his third extra point in the last four games after that last TD, allowing the Cardinals to stay within eight points late in the game when it should’ve been a two-score margin.

8. We’ve been praising the Vikings for their lack of penalties this season, with only 25 coming into the Arizona game. It was a different story with 10 penalties for 86 yards in this game, including a head-scratching pass interference call on Peterson. Fortunately for the Vikings, the Cardinals also committed 10 penalties. O’Connell will make this a point of emphasis this week.

Cousins summed up the victory and the team’s current state by saying, “It’s great to be 6-1 and winning at home. It’s similar to our other wins when it really has been the whole team, needing a play on special teams, needing turnovers from the defense, needing the offense to show up and score. Complementary football is the way we’ve been winning. There’s so much we can do better so we can pull away when we get a lead, but it’s difficult to do that in this league.”

2. The New York teams returned to earth a bit as the Giants lost in Seattle, and the Jets fell for the 13th straight time to the Patriots. Bill Belichick moved to second in all-time wins at 326 and trails only Don Shula (347), and Belichick, as predicted, got the best of second-year Jets QB Zach Wilson, who threw three interceptions. The Giants are now 6-2 and the Jets 5-3, still much better than anticipated for both teams.

3. The Vikings and Bills are tied for the NFL’s second-best record behind the undefeated Eagles, who rolled over the Steelers 35-13 as Jalen Hurts passed for 285 yards and 4 TDs, three of which went to A.J. Brown. The Eagles should be 8-0 after this Thursday’s game at lowly Houston.

4. And how about the 49ers dominating the Rams 31-14 with newly acquired Christian McCaffrey producing the rare trio of running, catching, and throwing for a touchdown. Last year’s Super Bowl champion Rams are now 3-4, chasing Seattle and San Francisco in the NFC West.