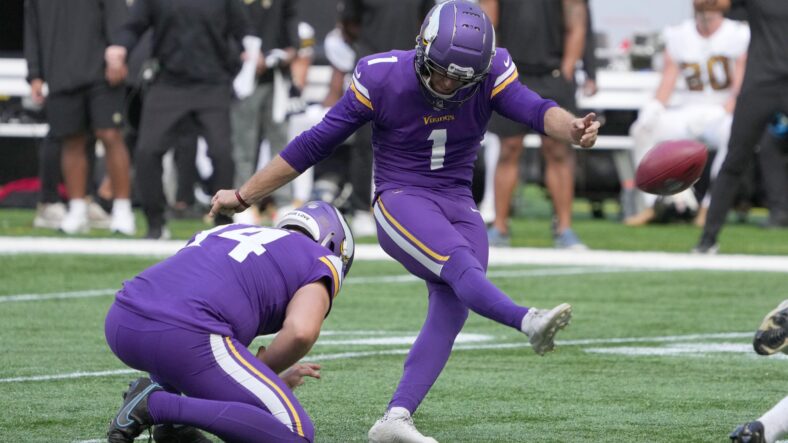 On Sunday, the Minnesota Vikings escaped with a 29-22 win over the Chicago Bears and took full control of the NFC North after the Green Bay Packers fell to the New York Giants in London on Sunday morning. Once again, special teams played a huge role in how this game played out, but on a day where the Vikings special teams played awful, Minnesota was able to come out with a win.

When the Vikings jumped out to a 21-3 lead, it seemed like Minnesota would simply cruise to a blowout win, and that would the end of it. No such luck ensued. Following this scoring explosion, the Vikings following four drives went like this:

Off of these drives, the Bears scored 19 unanswered points, taking a 22-21 lead late in the fourth quarter. Even still, Captain Kirk led his third consecutive game-winning drive for the Vikings where Minnesota converted five third downs, including Cousins’ QB sneak on third-and-goal to score the TD. Cousins then connected with Justin Jefferson for a two-point conversion to set the final score at 29-22.

Over the past two weeks, the Minnesota Vikings have had a few tough moments, especially late in games, but none of them have caused them to lose games. If you remember back to the Saints game in London, Greg Joseph missed an extra point, opening the door for the Saints to potentially tie the game and send it to OT if Wil Lutz’s 61-yard field goal at the end of regulation went through the uprights.

Obviously, it double-doinked, and the Vikings are now 4-1 as a result of that win and this weekend’s victory.

This upcoming weekend, the Vikings travel down to Miami to take on the Dolphins. Miami is going through multiple QB injuries right now, putting an expectation on the Vikings that they will head into their bye week 5-1.

Tua Tagovailoa obviously has his concussion concerns. Then, Teddy Bridgewater left this past Dolphins game under the concussion protocol, and in addition, he suffered an elbow injury. The expectation should be that a strong Vikings only gets better heading into their by week.