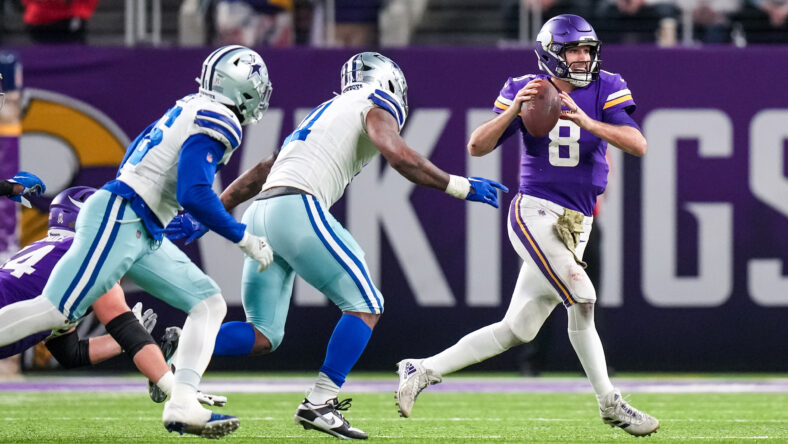 Sunday didn’t go as planned for Kevin O’Connell and the Minnesota Vikings. The Dallas Cowboys came into U.S. Bank Stadium, took their lunch money, and stuffed them into lockers on the way out. It was an utter beatdown of a team coming off an emotional win in Buffalo the week prior and was looking to keep pace with the NFC-leading Philadelphia Eagles.

Dallas’ lauded pass rush made its presence felt from the jump, as Micah Parsons came from Kirk Cousins’ blind side to force a fumble on the game’s first series. Parsons’ sack set the tone for the afternoon: the Cowboys pressured Cousins tirelessly, sacked him seven times, and threw the Vikings’ improved offensive line around like rag dolls.

A contributing factor to Dallas’ success rushing the passer was Christian Darrisaw’s absence for the better part of the game. Darrisaw exited the game in the second quarter due to a concussion for the second week in a row. Despite clearing concussion protocols before kickoff, Darrisaw didn’t seem like his elite self, allowing his first two sacks of the season (including Parsons’ sack-fumble) before exiting. Immediately following Sunday’s game, O’Connell announced that the second-year tackle would not play on Thursday against New England.

The way Sunday was going, even a healthy Darrisaw wasn’t going to bring much of a boon for the lackluster Vikings offensive line: five different Cowboys recorded a sack while pressure came from all over the field. Their ability to get home while just rushing four – six of Dallas’ seven sacks came in such scenarios – allowed Dan Quinn to sit back in coverage to reduce any narrow passing lanes Cousins may have had.

Heading into a short week of practice in preparation for New England, Minnesota’s offensive coaches have a mountain of a challenge to sustain success without big No. 71, especially considering the debacle they just put on tape. Bill Belichick -– arguably the best defensive coach of all time, let alone the best coach ever, period –- will be sure to do all he can to exploit a newly exposed chink in the Vikings’ armor.

To date, New England has shown the ability to bring pressure. Through 10 Weeks, New England’s defense leads the NFL in QB hurries and pressures, while their 36 sacks trail only – you guessed it – Dallas. Matt Judon, New England’s star linebacker, leads the NFL with 13 sacks. After Parsons and Co. tore them to shreds on Sunday afternoon, there will be no rest for the weary Minnesota line.

The amount of pressure Belichick has been able to generate has amounted to poor quarterback play: the Patriots are allowing the league’s second-worst quarterback rating at 74.0. Only Philadelphia, another team the Vikings struggled to move the ball against, has shut down quarterbacks more effectively.

Minnesota’s banged-up and exposed offensive line isn’t the only advantage New England brings into Thursday night’s matchup. Since taking over the Patriots head job in 2020, Belichick is 14-4 on Thursdays. Simply put, he can prepare faster and more effectively in a shorter week of practice than his opponents have been able to historically.

The owner of six Super Bowl rings has owned not only Thursdays in his career but also rookie head coaches. Since 2010, Bill has engulfed wet-behind-the-ears head honchos to a tune of 25 wins in 31 tries, even while including this season’s 0-2 record after losses to Miami and Chicago.

Minnesota is in the middle of a four-game stretch against ferocious pass rushes. Their offensive staff passed the first test and miserably failed the next. Without their budding star tackle to anchor the left side of the line, they will have their work cut out for them when Bill Belichick and the Patriots machine rolls into U.S. Bank Stadium on Thanksgiving night. Kickoff is at 7:20 pm, and the Vikings opened as three-point favorites.