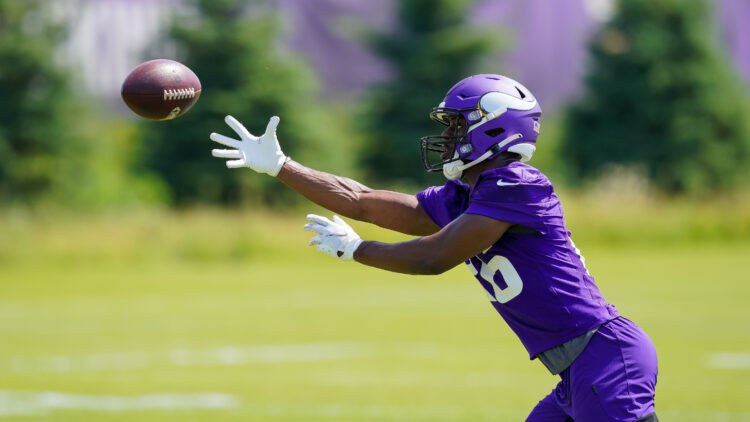 The Minnesota Vikings running back room is crowded to start August.

Dalvin Cook is assuredly the RB1, with fourth-year halfback Alexander Mattison in line to assume RB2 duties once again. After that, the outlook is mysterious, as Kene Nwangwu and rookie Ty Chandler will battle for RB3 — and maybe even RB2 if Minnesota’s new coaching staff isn’t enamored with the aforementioned Mattison.

ESPN has an eye on one of the Vikings young tailbacks, Kene Nwangwu. The Iowa State alumnus made headlines in 2021 as a rookie, returning two kicks returns for touchdowns in road games against the Baltimore Ravens and San Francisco 49ers. Somehow, Minnesota lost both of those games.

That didn’t dampen the enthusiasm about Nwangwu, though. Former general manager Rick Spielman found the speedster in the 4th Round of the 2021 NFL Draft, selecting Nwangwu to solve the Vikings kick-returning woes. And that he did.

Via Football Outsiders, ESPN published a Top 25 NFL prospects in 2022 list it called “under-the-radar young players who could break out.” Players were ranked from 1 to 25, with Nwangwu placing at #22.

Rivers McCown wrote about Minnesota’s swift RB, “Nwangwu has very little chance of making an offensive impact this year beyond injury chaos, but he’s so explosive with the ball that we couldn’t leave him off your radar.”

Indeed, Nwangwu is one of the rare speed merchants who made an impact immediately. Outside of players like Tyreek Hill, some draft prospects known for “speed only” fall on an ash heap of irrelevance. See: John Ross. Nwangwu isn’t like that, at least not through one full season as a pro.

Nwangwu didn’t do much as a running back in 2021 — 13 carries for 61 yards — but that was inside an old offensive system. The Vikings hired Kevin O’Connell to replace Mike Zimmer in February, a man known for offense-first thinking, particularly as offensive coordinator with the Los Angeles Rams. Because of Nwangwu’s speed and electricity, the working theory is he’s probably too irresistible for O’Connell to let marinate in a boring RB3 role. Ergo, Nwangwu is likely to resume his kick-returner duties meanwhile undertaking a more expansive responsibility in the Vikings new offense.

And in the event Nwangwu encounters a sophomore slump or O’Connell strangely doesn’t use him, the Vikings RB room in 2023 could look significantly different. Mattison’s final year under contract is this upcoming season, and Cook has a potential opt-out clause after 2022.

Vikings safety Camryn Bynum also made the ESPN-Football-Outsiders list, albeit as an honorable mention.