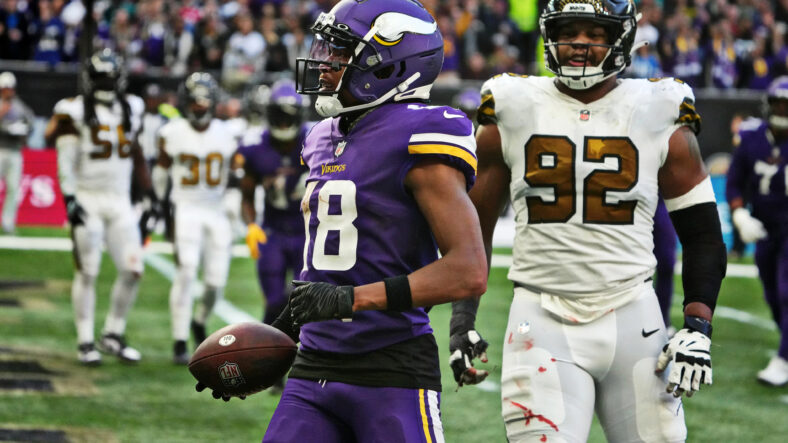 The Vikings went to London and did what they have done for hundreds of years — pillage and plunder the countryside. Jokes aside, the Vikings won in an ugly fashion. However, a win is a win, and this one gave them a well-earned boost in playoff odds.

Discussing the playoffs after one-quarter of the season is a bit premature. However, every game counts, even the early season ones, when it comes to playoff seeding. Every game so far has been against conference opponents. Getting three wins, with two of them against divisional opponents, is critical for playoff seeding and tiebreakers.

Now, these games, outside of the domination of the Packers in Week 1, have been ugly. I mean downright terrible, gut-wrenching, anxiety-inducing games. Although, unlike in 2020 and 2021, these ugly games have resulted in wins.

Some fans, especially on Twitter, have quickly pointed out that the team is not playing well. This is not a completely inaccurate statement. The offense has looked great at times. Then moments later look like they have no idea what they are doing.

Regardless of all of this, there are reasons for optimism.

Vikings Above .500 after 4 Games for First Time with Cousins

Kirk Stans are quick to point out that QB wins are not a stat. They are right. It is a team stat. However, it is interesting to note that since Kirk Cousins joined the Vikings, the team has never been above .500 after a season’s first four games. Well, that has officially changed.

With the win against the Saints, the Vikings stand at 3-1.

Interestingly enough, Kirk has had a different offensive coordinator in all five seasons as a Viking, and this season is the first year above .500 through 4 games. This shows that Kirk and the new system and coaching are clicking faster than in the previous four seasons.

What’s more important for the Vikings is that this is the time of year that Kirk Cousins gets hot. We all remember Kirktober when he was lights out. If history repeats itself, the Vikings could be considered genuine contenders for the first time in years.

The Vikings, as true contenders, are beginning to show up in their odds of making the playoffs. According to Football Outsiders, the win over the Saints boosted their odds of making the playoffs from 65.3% to 75.6%. Football Outsiders also show that the Vikings are currently projected to have 10.3 wins and the Packers to have 10.5.

This indicates that a showdown at Lambeau Field for a division title is certainly possible. Now, all we need is for the team to jell just a bit more. And most importantly, the team and fans need to embrace these ugly wins. After all, a win is a win. We will take them any way we can.