The Vikings Offensive Line Has Quietly Been Impressive 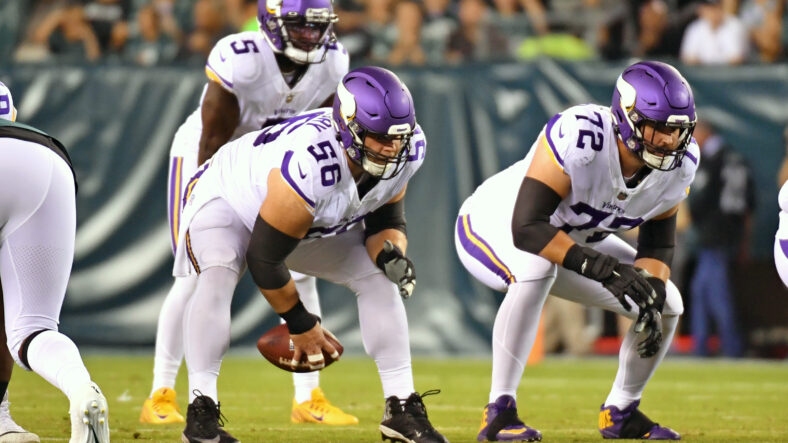 Vikings fans are traumatized from offensive line performance of the last decade, but these woes may be over. In the offseason, newly hired general manager Kwesi Adofo-Mensah identified the weakness of the offense – the offensive line.

He didn’t stop after just identifying the problem but also tried to fix it. At first, he signed two veterans with starting experience to compete for the starting right guard job. Jesse Davis played out of position in Miami for years because they had their own struggles up front. He was supposed to switch back to his natural position. Chris Reed, meanwhile, had some fantastic games in Indianapolis for the Colts. He was a backup for them, but whenever he had to start, the line didn’t miss a beat.

In April’s draft, Adofo-Mensah added another body to the mix when he selected Ed Ingram in the second round. The LSU guard proved in the SEC his skills for multiple years. He ran away with the starting job in training camp and made Davis expandable. He was later traded to the Steelers for a 2025 conditional seventh-rounder.

The other position stayed the same as in 2021. Brian O’Neill is a solid right tackle and even earned Pro Bowl honors after last season. Center Garrett Bradbury was the focus of fans and media. The new Vikings front office was under scrutiny for not replacing him. However, he’s doing fine so far.

No changes came on the left side of the line as Ezra Cleveland entered his third season as Vikings guard. At left tackle, the Vikings have Christian Darrisaw. The 2021 first-round pick drew a lot of praise in the preseason and most envisioned a significant step from him to complete the strong tackle duo.

Chris Kuper was hired as offensive line coach. He replaced Phil Rauscher after just one season with the team. Kuper is a former NFL player and played for the Broncos in 90 games from 2006 to 2013.

PFF graded the Vikings’ offensive line as a poor unit in the past, but the grades look a lot better this season through the first three games of the campaign.

The sample size is still relatively small, and there are 14 games left in the season. However, the offensive line looks much better than it has in the past. Both in run blocking and pass protection, they took a big step in the right direction. That is the kind of offensive line a playoff contender should have.

Christian Darrisaw is looking more and more like a star offensive lineman. His development is crucial for the stability of the Vikings’ offensive line in the future, as tackles are extremely important. The left tackle position is viewed as one of the most critical positions on the team.

Garrett Bradbury was a liability since his draft in 2019. He is looking a lot better now. While he still doesn’t have elite strength, he battled his way through the matchup against Jordan Davis without any bad reps to show for it.

Rookie Ingram doesn’t have the best grades so far. However, he played his first three NFL games, including two unfavorable matchups against outstanding defensive tackles Fletcher Cox and Kenny Clark. The learning curve in the NFL is steep, and he will get better over time.

Brain O’Neill is a solid player, like always. He won’t vow with his play, but not many players are as consistent as the former Pitt Panther. Ezra Cleveland took a step forward in his development. He’s looking like one of the best guards in the NFL, especially his mean double-team blocks, and the ability to finish plays by knocking opponents to the ground is turning heads weekly.

The offensive line may be an average unit in the NFL, which is a big upgrade over past groups. It will help the offense get more consistent by creating holes in the running game and forming a nice pocket for pocket-passer Kirk Cousins. Every time the Vikings went to the playoffs in Mike Zimmer’s tenure, the offensive line was about average, and the pass protection could hold up. This group seems to have what it takes and now has to keep playing at that level.