The Cardinals Key Players vs. Vikings 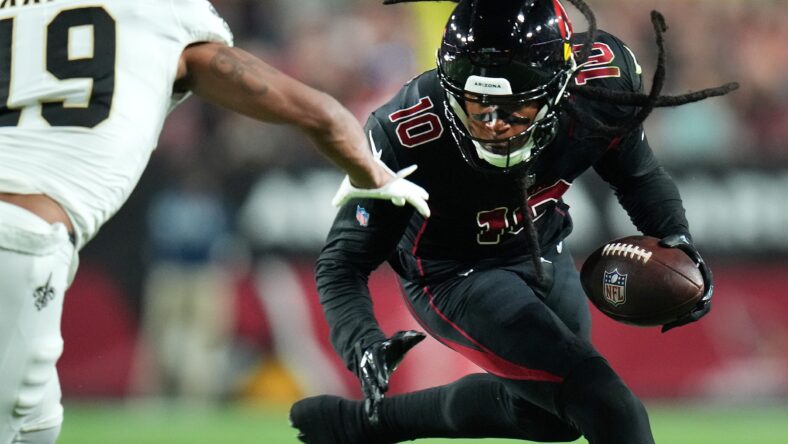 The Minnesota Vikings return to action after their bye week with a game at US Bank Stadium against the Arizona Cardinals.

In front of the home fans, the Vikings will hope to move to a 6-1 record and not only strengthen their position at the top of the NFC North division but also maintain their place toward the top of the NFC playoff seedlings. Meanwhile, the Cardinals hope to build on their victory against the New Orleans Saints and return to par at 4-4, ensuring they stay in contention in a very close NFC West division.

Here are the Cardinals key players for Sunday’s game against the Vikings.

The Vikings don’t have a good history against mobile quarterbacks; they don’t come much more mobile than Kyler Murray.

The diminutive Cardinals quarterback is most dangerous when plays break down, and he tries to make something happen, whether scampering around in the backfield and making a pass or setting off and using his legs to make plays on the ground. The Vikings defense couldn’t handle Jalen Hurts in the first half of their Week 2 matchup with the Philadelphia Eagles. They did, though, keep the Eagles off the scoresheet in the second half. The Vikings hope the adjustments made that day will help them against Murray.

The Vikings have had two weeks to plan for Murray, so it will be interesting to see their gameplan. Murray threw precisely 400 yards against the Vikings in a Week 2 game at State Farm Stadium last season. He threw 3 touchdowns and 2 interceptions while rushing for 31 yards and a score.

Despite all that offense and the help of those turnovers, Greg Joseph had a field goal attempt to win the game. Of course, he missed, and the Cardinals won 34-33, which set a precedent for the Vikings 2021 season. The Vikings lost too many close games, whereas this season, it’s been going the other way.

The Cardinals got their star wide receiver back last week when DeAndre Hopkins returned following a six-game suspension. There was little rust as he tallied 103 receiving yards from 10 catches. With Marquise Brown landing on Injured/Reserve following a foot injury suffered in the Week 6 game against the Seattle Seahawks, Arizona still won’t be able to pair the young receiver they traded this year’s first-round draft pick with their returning star. A definite plus for the Vikings.

Hopkins has been one of the best wide receivers in the NFL for a decade, making him the primary threat on the Cardinals offense. There are other players the Vikings players will have to contend with, like Rondale Moore, Robbie Anderson, and Zach Ertz. However, if they can keep Hopkins quiet, it will go a long way to achieving victory.

Arizona isn’t blessed with top-end talent at the cornerback position, so they will need plenty of safety help to slow the Vikings passing game — particularly Justin Jefferson, who they may decide to double-team. Budda Baker is arguably the best player on the Cardinals secondary, and they will need a big game from him.

He is particularly good in run defense which will also be necessary, as the last thing the Cardinals defense needs is Dalvin Cook breaking off big runs if they are already struggling with Jefferson and Co. It’s a big ask for Baker to be instrumental in both phases of the defense, but it’s what Arizona needs.

The Vikings offensive line has been enjoying a good season so far. However, the strength of the line is undoubtedly the two tackles, while the middle of the line can still run into trouble. That happened in Miami when they came up against a fearsome Dolphins defensive line. The Cardinals line isn’t on the same level as the Dolphins, but they have some good players.

JJ Watt is the big name, but while the veteran is still a solid defender, at 33 years old, he’s not the elite player he once was. This season, the much younger Zach Allen has been shining on the interior for the Cardinals. His PFF grade of 76.0 is the highest of any player on the Arizona roster. He provides an interior pass rush and stout run defense and is enjoying a career year.