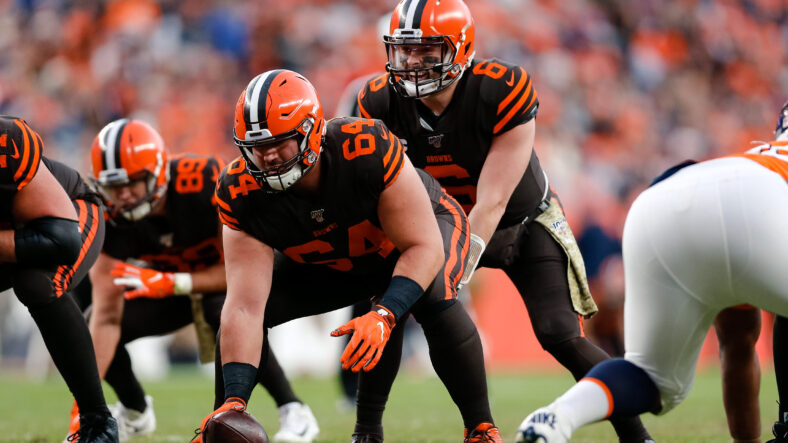 Free agent JC Tretter is off the Minnesota Vikings radar as a possible solution to the team’s center situation as the veteran lineman reportedly retired on Thursday. And it doesn’t seem like the Vikings were all too interested in Tretter from the onset of his free agency.

The veteran offensive lineman was stunningly released by the Cleveland Browns in March, leading Vikings enthusiasts to envision a relationship between Tretter and Minnesota, a team he evidently cheered for as a kid. Minnesota plans to embark on the 2022 season with incumbent center Garrett Bradbury as the starter, but the fourth-year Viking has struggled as a pro with pass protection.

Specifically, pass blocking was Tretter’s modus operandi. He hadn’t encountered a Pro Football Focus pass-blocking grade south of 80.0 since 2015. For Vikings fans, Tretter felt like a monumental potential upgrade from Bradbury, who graded a 43.7 pass-blocking mark from PFF in 2021.

Too, new Vikings general manager Kwesi Adofo-Mensah previously worked with the Browns, bolstering the case for Tretter-to-Vikings, at least in theory.

But no such luck for the Vikings as the Bradbury experiment is likely to continue, with contingency plans such as Austin Schlottmann and Chris Reed in place, two men added from free agency. Schlottmann dazzled last weekend in the preseason versus the San Francisco 49ers, and Reed has taken center snaps at training camp.

Moreover, with Tretter retiring, the Vikings could swing a trade for a new center. Adofo-Mensah proved his mettle for improving the roster’s weak spots on Monday when he orchestrated a trade for backup quarterback Nick Mullens with the Las Vegas Raiders. If Minnesota is not satisfied with Bradbury or no free agents interest the franchise when roster cuts hit leaguewide next week, Adofo-Mensah could pick up the phone for a center as he did for Mullens. Keep an eye on the Jacksonville Jaguars as a possible trade partner.

Tretter is the president of the NFL Players Association.