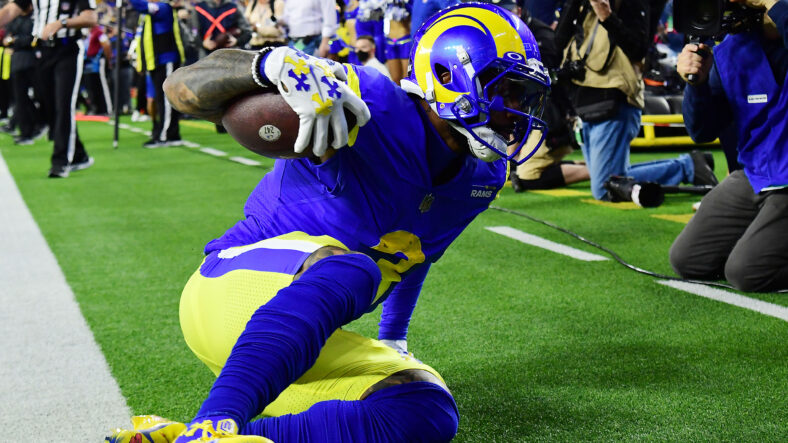 VikingsTerritory’s Purple Rumor Mill is a two-day chronicle each week. All the week’s rumors are lassoed and plopped in two spots — articles on Saturday and Sunday — for review. Today is the October 22nd edition.

This rumor — or idea, really — is a fan-driven ordeal. Beckham is a free agent and expected to sign with a contending team for his November return to action. And because the Vikings are unexpectedly 5-1, head coach Kevin O’Connell worked with Beckham in Tinseltown, and Minnesota has LSU alumni galore — folks believe he could land in Minnesota.

However, a few factors prevent this theory from becoming reality:

While it’s fun to dream, Beckham to the Vikings is an extreme longshot.

This one is markedly more realistic than anything to do with Odell Beckham.

Sources tell VikingsTerritory that Rudolph is somewhat disillusioned with his role in Tampa Bay. In 2022, the Buccaneers offense has targeted Rudolph twice. The ex-Vikings TE was a healthy scratch last weekend in Tampa Bay’s loss to the Pittsburgh Steelers.

Too, the Vikings could afford to bolster roster depth at tight end, especially if Irv Smith is injured.

Keep an eye on the Rudolph reunion because there is reportedly an appetite for it on both sides.

Rumor: Minnesota should trade with Cleveland for RB Kareem Hunt.

A strange theory indeed, this recommendation came from CBS Sports, who explained the Vikings should “add RB depth” with the NFL’s trade deadline approaching.

Bryan DeArdo from CBS Sports recommended Hunt for such a trade and wrote, “Acquiring another running back, such as Cleveland’s Kareem Hunt, would bring versatility to the Vikings’ offense while helping keep Cook fresh for the stretch run. Hunt is a former NFL rushing champion who spent the past three-plus seasons sharing a backfield with Nick Chubb.”

This one won’t happen, as Minnesota doesn’t have the money, and it already employs Dalvin Cook, Alexander Mattison, Kene Nwangwu, and Ty Chandler. Running back isn’t a need.