Pounding the Rock Is Recipe vs. DAL 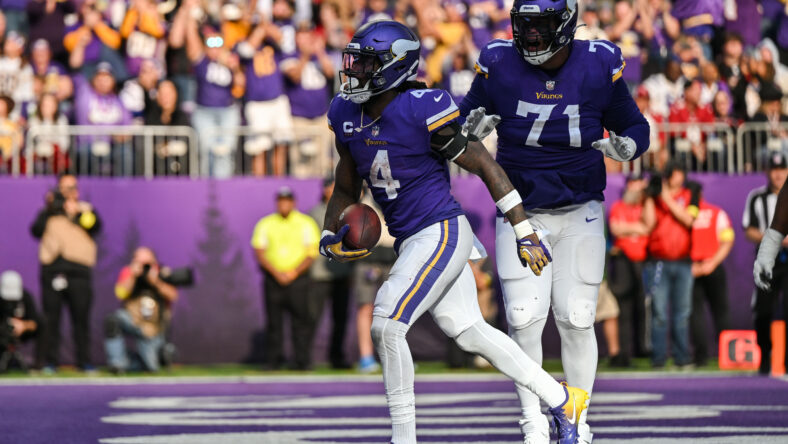 The Minnesota Vikings are back home for the first of five games that will take place at U.S. Bank Stadium out of the next six.

The Vikings look to make it eight wins in a row on Sunday and strengthen their playoff position even further. The team standing in their way is the Dallas Cowboys. It’s another big game against another team with playoff and Super Bowl aspirations. The blueprint for beating the Cowboys has already been set — pounding the rock is the recipe.

The Cowboys own a formidable pass rush this season, aided by a talent like Micah Parsons at linebacker. However, their run defense has been a problem, something Mike McCarthy has been eager to fix dating back to training camp.

Earlier in the week, the Cowboys head coach spoke of much-needed improvement. McCarthy commented, “We’ve been talking about this since training camp – the way we were gonna be challenged from Day 1,” He also spoke of the challenges their porous run defense is causing to their ability to rush the passer. “We recognize our strengths as far as pass rush, but pass rush is a privilege right now. Until we take care of this run challenge, that’s what it’s gonna be.”

On average, the Cowboys give up 143.1 yards per game on the ground to opposing teams. Only three teams in the league are giving up more. They have given up over 200 yards in their last two games against Minnesota’s division rivals Chicago (240) and Green Bay (207). It’s no surprise, then, that there is concern in Dallas. This Vikings team may not entirely revolve around the run game like it has in recent seasons. However, everything is still in place for Minnesota to dominate on the ground. Dalvin Cook is averaging 5 yards per carry, and the Vikings offensive line is full of men who excel at run blocking.

Of course, the Cowboys are 6-3, so they’ve been able to win games. However, the Bengals and Rams failed to run the ball effectively in two of those wins. The Giants, Commanders, Lions, and Bears could not reach 200 passing yards in the other four wins. Just running the ball won’t be enough; it has to be complimentary football, something the Vikings have been doing across the board this season in all phases of the game.

Setting Up the Knockout Blow

With so much focus on the Cowboys run defense, do they dare to try and load the box to try and stop the Vikings run game? Doing so means leaving Justin Jefferson one-on-one, which is unlikely to end well. The recent addition of T.J. Hockenson also gives the Vikings an excellent middle-of-the-field target, thus making the Vikings offense even more challenging to stop. It is quite the conundrum for the Cowboys.

If the Vikings can run the ball and set up explosive passing plays, it’s difficult to see how the Cowboys defense will be able to cope. Minnesota’s offensive coordinator suggested Dallas will be talking about shoring things up. He was perhaps daring them to go man to man with his receivers.

If the Cowboys can’t slow the Vikings offense, their only solution could be getting into a shootout. Minnesota’s defense has been giving up a lot of yards all season but has largely kept a lid on the scoring. Last week, the Bills became the first team to score 30 points against the Vikings this season.

A big reason the Vikings defense has been so stingy is their inclination to make big plays when it matters. They are second only to the Eagles regarding turnovers, with 10 interceptions and eight fumble recoveries. The Cowboys have 15 turnovers of their own this season, which is the fourth most in the league. That will be another interesting wrinkle to this game; turnovers will likely play a big part.

The Vikings run defense will also be important, with Dalvin Tomlinson still on the injury report. If he cannot play again, his presence will be sorely missed in this game. Tony Pollard has back-to-back 100-yard rushing games in the absence of Ezekiel Elliott, who has also been injured. If Elliott can return this week, the Cowboys rushing attack will get stronger. Both teams want to establish the run and set up an explosive passing game. The team with the most success establishing the run will win the game.