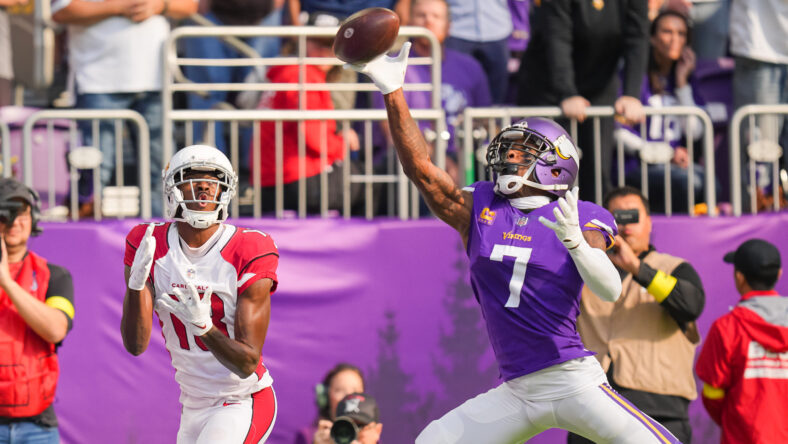 On Sunday afternoon, the Minnesota Vikings hosted the Arizona Cardinals. After playing over 150 games for Arizona, there was no denying that Minnesota cornerback Patrick Peterson was going to have this matchup circled. Playing his former team for the second season in a row, it was clear he wanted a win this time.

Over the past two seasons, Patrick Peterson has become a vocal leader for the Minnesota Vikings defense. Despite a slight decline in his play and abilities, he’s continued to push a defense that has a secondary that often underperforms. While looking to bring up the youth around him, there’s never been a question about his effort or toughness.

Sunday was different for Peterson. Last year, he traveled with the Vikings to Arizona for a contest they ultimately lost by a single point. This year, his former teammates came to his new home. Early on, Peterson established what type of a game he would play and drew a 15-yard penalty after getting into it with the Cardinals sideline. Taking that penalty in a low-pressure situation allowed him to control the narrative with an opportunity to back it up.

Kyler Murray attacked Peterson early on Sunday, with the corner coming up victorious by breaking up a pass on a deep ball down the sideline. He defended three total balls on the day, matching a season-high set just a game ago against the Miami Dolphins. Peterson’s four tackles were also the second-highest amount he’s had in a game this year.

Following a Minnesota interception, Peterson sprinted to the end zone for another shot at Arizona. This time he mocked quarterback Kyler Murray for playing video games and made sure everyone knew the intention postgame. The latest Call of Duty launched on Friday, two days before the Minnesota game, and it’s been well-documented how much worse Murray is following each launch day.

At the end of the game, Peterson also made sure he had words for Cardinals general manager Steve Keim. A former player himself, Keim apparently has dodged attempts by Peterson to get in touch and clear the air over whatever bothered the cornerback on his way out of Arizona. Again, not backing down from the opportunity to make a point, Peterson found the cameras.

If a revenge game is on the table, this is certainly how you want it to go. Peterson did his talking right from the get-go while never stopping. He also backed it up with his play on the field, and his team emerged victorious.

The Vikings are now 6-1 on the season and have turned their focus to a middling Washington Commanders squad. Maybe Kirk Cousins is looking for a revenge game of his own.