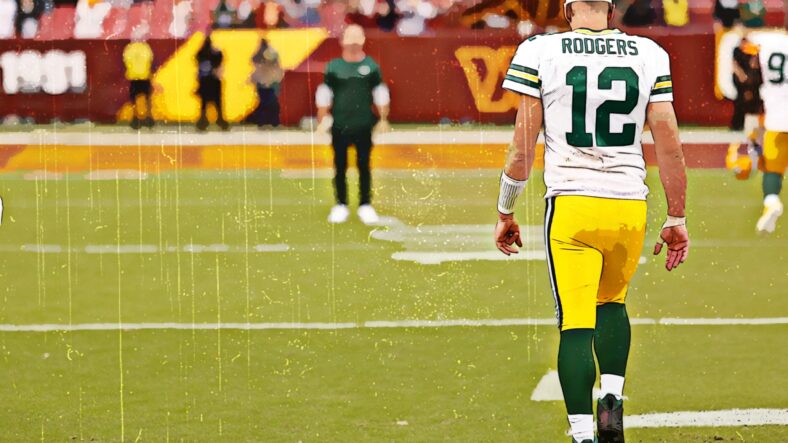 The Green Bay Packers lost to the Washington Commanders on the road in Week 8, 23-21, further diminishing their already suspect playoff hopes.

Before 2022, Green Bay won 13 games in each of the last three seasons and now must run the gauntlet — winning every game — to achieve the mark again.

Quarterback Aaron Rodgers, who turns 39 next month, governed a Packers offense that was 0 for 6 on 3rd Downs at Washington, a stat that almost certainly broods disaster. And that’s precisely what happened to Green Bay — a team favored to win the NFC North for a fourth straight year when the regular season began — as the Taylor Heinicke-led Commanders were victorious.

According to FiveThirtyEight, the Packers have just a 27% chance of reaching the postseason in 2022, a probability lower than the Atlanta Falcons and New York Jets, among several other franchises.

None of those seven contests will be cakewalks unless something bizarre occurs to a litany of starting quarterbacks.

Moreover, the Packers simply look silly at the moment. The offense isn’t clicking, and Rodgers is worlds apart from his 2020 and 2021 form. The team traded Davante Adams to the Las Vegas Raiders in March, rookie Christian Watson hasn’t blossomed — at all — and none of the other wide receivers have seized the moment.

In that regard, Rodgers will be forced to “do it all on his own,” a grim undertaking without notable playmakers sans an acronym “RB” next to their name. Green Bay is running the ball 40.1% of the time, a ratio that should probably be spiked when Aaron Jones and A.J. Dillon are the top offensive talents.

Heading into the 2022 season, Packers fans bragged about “the best defense Rodgers ever had,” so it’s not like the defensive personnel is deficient. Green Bay’s woes are offensive-driven, and it’s difficult for Packers loyalists to stomach after 30 consecutive years of Hall of Fame quarterback performance.

Next on the docket for Green Bay? Perhaps the best team in football. Rodgers and Co. travel to Buffalo for a date with the Bills and the NFL’s MVP frontrunner, Josh Allen. The Vikings don’t play the Packers until Week 17. Minnesota won the first battle in Week 1 at U.S. Bank Stadium, 24-7.

Green Bay will likely have to finish the season 7-3 to obtain a wildcard seed and buck the 27% math from FiveThirtyEight.