Packers Nation Appears to Be Turning on Aaron Rodgers 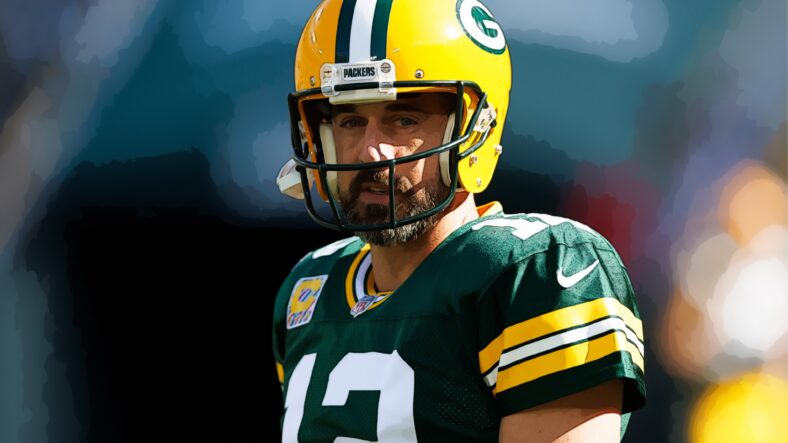 Green Bay Packers faithful aren’t accustomed to non-stellar starts to seasons, and such fans may be slowly turning on quarterback Aaron Rodgers.

The Packers lost in London last weekend to the upstart New York Giants, 27-22, sending Green Bay to a 3-2 record and second-place standing in the NFC North behind the Minnesota Vikings (4-1).

And while some of the Packers fanbase remains steady and committed to the notion Green Bay will “turn it around,” other prominent personalities are becoming increasingly disenchanted with the 38-year-old quarterback.

It started on social media in Week 4 against the New England Patriots. The Packers weren’t playing well versus New England, and dozens of folks earnestly recommended Rodgers’ benching in favor of QB2 Jordan Love. Of course, the Packers did no such thing, and Green Bay later squeaked out a win, 27-24, in overtime.

Well, they didn’t squeak out a win in London last weekend, sending some Packers to the hills with frustration. Rodgers’ mortality and “second place” is relatively new for the Packers, who’ve won three straight NFC North crowns.

On Tuesday, Packers reporter Peter Bukowski culminated the discontent when he tweeted, “Aaron Rodgers is playing like a QB who publicly feuded with his team, choked in the playoffs before mulling retirement, didn’t believe he could help the team by coming to spring ball, and then spent the summer doing more podcasts than me. But no, I can’t figure it out either.”

Through five games, Rodgers ranks 13th in the NFL per EPA+CPOE, a departure from the norm for the Packers signal-caller, who usually checks in somewhere around the Top 5. Indeed, growing pains from life without Davante Adams are palpable, and Green Bay could be lucky to boast a 3-2 record with what fans perceive as struggles.

Still, Green Bay is 3-2, in the NFC’s seventh seed for playoff positioning as of October 12th, and is considered a 66% certainty to reach the postseason, according to FiveThirtyEight.

But any glimpse of mediocrity — when Rodgers is the QB1 — causes Packers loyalists to shudder and, in Bukowski’s case, skewer the quarterback for his alleged offseason misgivings.

In the end, the Packers will bounce back and probably push the Vikings to the limit for the division. That’s what they do. Plus, Packers fans must fall in line with Rodgers because the franchise is on the hook with him for guaranteed money — to the tune of $150,815,000.00.

Rodgers and the Packers host the New York Jets on Sunday, looking for a “get right” game with home cooking. Green Bay is favored by seven points. The Packers haven’t started a season with a 3-3 record or worse since 2012.