Once Again, Irv Smith Is Injured. 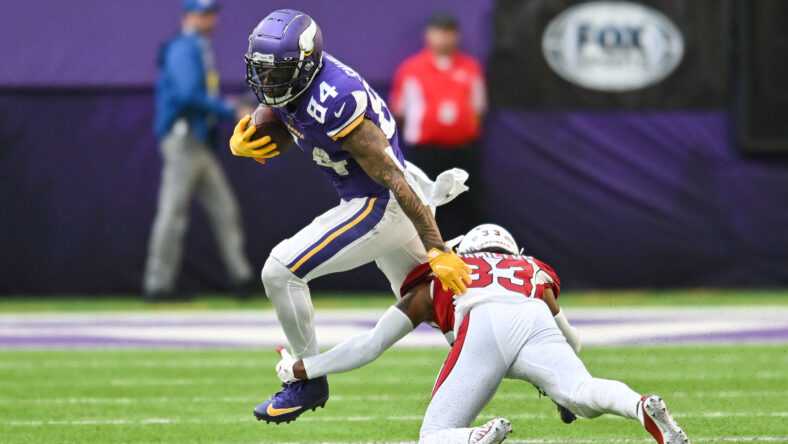 The Vikings entered Week 8 as one of the healthiest teams in the league. They have lost a few players due to injuries, like first-rounder Lewis Cine, who fractured his leg in London against the Saints. Receiver Olabisi Johnson tore his ACL in the preseason and is also missing the season on injured reserve. Coming into the Week 8 matchup, of all 53 players on the team, only Jonathan Bullard missed the game because of an illness.

After the win, the Vikings have some injury concerns. Dalvin Tomlinson exited the game with a calf injury. The extent of the injury is unknown at this point, and he will get an MRI, as head coach Kevin O’Connell confirmed after the game. Another situation to monitor is Irv Smith’s ankle injury.

He got rolled up at the end of the game and was also due to get an MRI. It was determined that he suffered a high ankle sprain.

The team is still sorting out the timeline, but he could miss some game action, according to Jeremy Fowler from ESPN. Usually, injuries like this take a few weeks to heal. Depending on the severity, it could also take over a month.

Irv Smith is in the final year of his rookie deal. Therefore, he’ll be an unrestricted free agent after the season and is seeking a new and more lucrative contract. However, he has not shown that he can stay on the field. Smith played all 16 games as a rookie in 2019 but missed three contests in 2020.

His big breakout campaign was supposed to happen last year after the Vikings cut ties with veteran Kyle Rudolph. Smith tore his meniscus in the preseason and missed the full year after undergoing surgery. This season, he had another shot at a breakout season but broke his thumb in training camp. For that reason, Smith missed a lot of practice reps and had a slow start to the season.

Free agent signing Johnny Mundt even had more snaps than Smith in Week 1. Through the season’s first seven games, Smith caught 22 passes for 168 yards and 2 touchdowns. The expectations for the former second-round pick are much higher because of his draft status. He certainly has the athleticism to make a bigger impact on the games. The injury could put his future on the Vikings team in serious jeopardy.

Smith’s backup, Johnny Mundt, is exceeding expectations. In his five-year NFL career before joining the Vikings, Mundt caught 1o passes, a number he already topped in seven games in Minnesota with 12 receptions. He also caught his first career touchdown in the win over the Cardinals.

Mundt has been a solid contributor as a second tight end. However, he lacks the explosiveness to be a good option as a starter for multiple games. That opens the door for a trade before the 2022 trade deadline on Tuesday at 3 pm CT. Considering the 6-1 start, the Vikings should be buyers at the deadline and try to acquire another weapon at the tight end position.