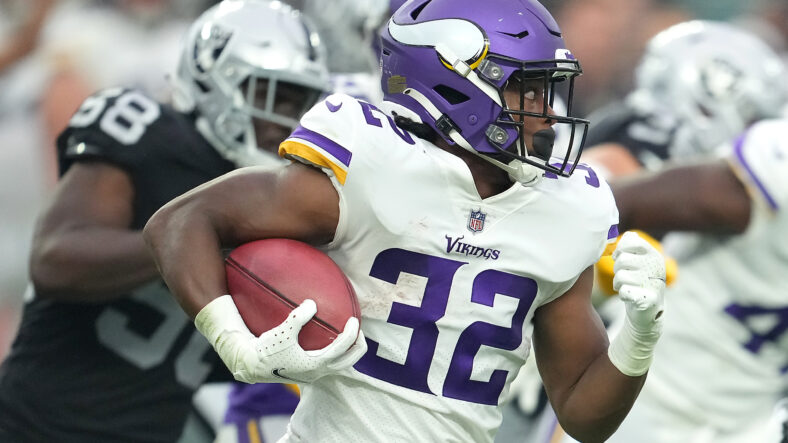 The Vikings welcomed the San Francisco 49ers into TCO Performance Center on Wednesday and Thursday for joint team practices. Joint practices are often the time when players on the fringes of the roster make their case, as Adam Thielen did in Cincinnati in 2016. The Vikings have plenty of position battles and players grinding to make the 2022 version of the team.

Let’s break down some of the main takeaways from the Vikings’ offensive position competitions from the last two days.

Vikings fans anxiously await the QB2 decision as we inch closer to Week 1. O’Connell still has not decided on the position, as Mond took the bulk of second-team reps on Wednesday, with Mannion taking more of them on Thursday. Mannion had a few nice throws this week, including two deep shots to Ihmir Smith-Marsette, one of which he took to the house. However, he was mostly pedestrian, taking the safe and short throws and showing a lack of mobility in the pocket. Not designed for urgency, Mannion orchestrated a three-and-out on his 2-minute drill on Thursday.

Mond was better, but not by much. His tentative nature showed itself again on Wednesday, as he was antsy in the pocket and quick to scramble, which has been a concern voiced by his coaching staff. Unlike Mannion, he executed a perfect 2-minute drill on Wednesday, with multiple big-time throws to Bisi Johnson and Smith-Marsette, setting up a Greg Joseph field goal. The second-year passer from A&M’s lowlight came on Thursday when he badly overthrew a Bisi Johnson crossing route and was intercepted up the left sideline.

Ihmir Smith-Marsette will likely make the team, but how he performs in camp will likely dictate the opportunities he gets in the regular season. As on Sunday, ISM showed flashes this week, catching the aforementioned deep shots from Mannion and generally looking more comfortable in the offense than he did last year. Along with Albert Wilson and Jalen Nailor, he fielded punts towards the end of Thursday’s practice, although he still doesn’t look comfortable back there.

Organizational soldier Bisi Johnson showed nothing spectacular; his most notable moment came when he spelled KJ Osborn for one play with the first team, providing insight that he may be WR4 at this point.

Like Sunday, Albert Wilson didn’t get many reps throughout the week but made them count when he did. He caught another touchdown on Wednesday, this time from Mannion in the back-left corner of the end zone. Although he is far down on the depth chart today, his knack for finding paydirt may be something the Vikings want to keep around.

Jalen Nailor, a rookie who has flashed lots of promise thus far in camp, didn’t strengthen his case to make the roster this week, save a twirling one-handed catch on a throw behind him from Mond on Wednesday. At this point, it’s safe to say that fielding punts will be his best chance to make the 53.

The most notable takeaways regarding the running back room surround Ty Chandler. On Wednesday, he was aggressive and initiated contact like he was on Sunday. Showing a burst and power that caught many Vikings fans off guard, he is making decisions difficult for O’Connell and his staff come cut day. Unfortunately, he rolled an ankle and had to sit out Thursday’s practice.

Fan-favorite and native Minnesotan CJ Ham didn’t see the field much during scrimmages as a back or a tight end, pointing to a likely roster cut in two weeks. With this roster full of nail-biting position battles, Minnesota seems to be showing that it can’t afford to keep a fullback, albeit a Pro-Bowl one, on its roster in the modern NFL.

Second-round pick Ed Ingram seems to have all but wrapped up the starting RG position, as he took first-team reps both days this week and held his own against a stout defensive line. He also seems to have embraced the fanbase: after leading the fans in a Skol chant before practice, he proceeded to griddy over to position group drills.

Meanwhile, Ingram’s competition, Jesse Davis, was put on his backside early in elevens on Wednesday, came up favoring his right leg, and sat out the rest of the week. Likewise, Chris Reed, a backup center and guard option sat out both days with an elbow injury. He was wearing a compression sleeve on his left arm. Neither veteran looks poised to start Week 1.

Unfortunately, the Vikings will likely need Reed’s services sooner than later. Incumbent center Garrett Bradbury didn’t have a notably bad week but did have a holding penalty on the first rep of Thursday and was pushed around in the run game on Thursday, which is considered his strength. No questions have been answered on the center position as of now.

Continued uncertainties are concerning, from the inability of any second-string receiver to make a strong case to make the roster and the constant head-scratching play by the QB2s. Those vying to make the 53 have a great opportunity to show this coaching staff more of what they’re made of come Saturday night, as the Vikings host the 49ers at 6 pm CST at US Bank Stadium in the penultimate

Will is a husband, father of two, and a lifelong Minnesotan. He earned an undergraduate degree in Economics (just like Kwesi Adofo-Mensah). He became a Vikings fan in 2009 when Brett Favre stole his heart. Will’s favorite pastimes are water skiing, Minnesota sports, and Cinnamon Toast Crunch. He is the co-host of the Load the Box Vikings Podcast with Jordan Hawthorn. Follow him on Twitter (@willbadlose) and find his other sports content at Twins Daily and his very own Bad Loser Blog.