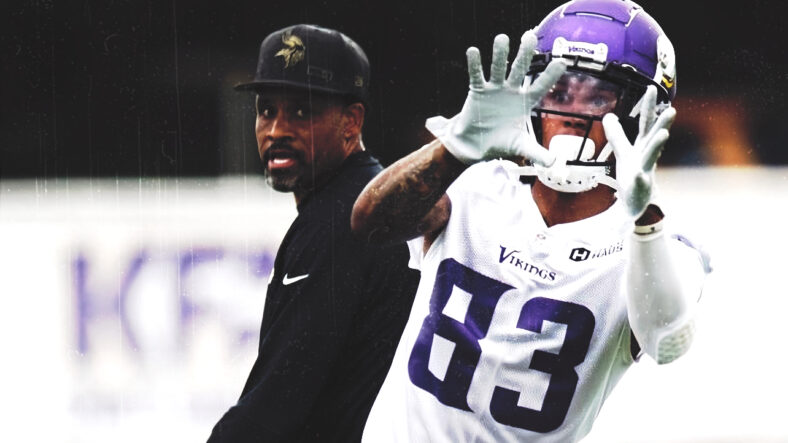 Minnesota Vikings running back Kene Nwangwu can apparently hear footsteps behind him — or ahead of him.

Rookie wideout Jalen Nailor dispelled any debates, according to him, about the team’s fastest player on Monday. When asked by the Pioneer Press’ Chris Tomasson if he was the fastest member of the Vikings, Nailor responded, “I say I’m first. I give myself number one. I definitely have got to go with myself. I’m self-confident. I believe in my speed.”

Nailor is in the mix to make the Vikings 53-man roster as a fourth or fifth wide receiver at the end of the month. Some have even predicted Nailor to steal K.J. Osborn’s job, Minnesota’s WR3.

For Nailor to be correct about his speed — that is, fastest than all other Vikings — numbers and measurements must not tell the whole story. Either that or he’s filled with enough machismo to answer falsely for effect. At the 2022 NFL Combine, Nailor ran a 4.50 forty-yard dash, a mark not considered blazing. He’s also been clocked running the sprint in 4.39 seconds.

Both times are faster than Nailor’s top recorded mark.

Still, for the Vikings, this is a sensational problem to ponder — too many fast guys. Minnesota also employs Dalvin Cook, Lewis Cine, Ty Chandler, and Kris Boyd, who would probably announce they’re among the speediest Vikings.

A big play threat at Michigan State, Nailor averaged 18.8 yards per reception in 2021. During April’s draft, Minnesota’s wide receiver coach Keenan McCardell reportedly “pounded the table” for Nailor, an indicator the Michigan State alumnus will be included in 2022 regular season plans. He tallied 695 receiving yards and six touchdowns in his final season as a Spartan.

Nailor is the fourth wideout drafted in the 6th Round or higher in the last five drafts for the Vikings. Ex-boss Rick Spielman previously onboarded Justin Jefferson, K.J. Osborn, and Ihmir Smith-Marsette since 2018. That amount is around the league average.

The Vikings are forecasted to utilize more four-WR sets, creating opportunities aplenty for the WR4 who waltzes out of camp. If speed has anything to do with the choice, Nailor could be emergent.

Nailor’s nickname is “Speedy.” He grew up idolizing Muhammad Ali, so expect more of these bold declarations from the 23-year-old.