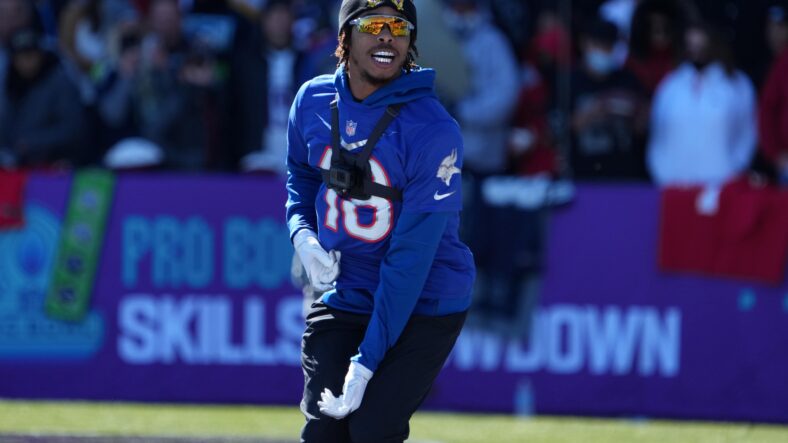 Fantasy football managers believe Minnesota Vikings wideout Justin Jefferson is a Top 3 pick among wide receivers in next month’s drafts. Fans of the Vikings tend to announce Jefferson is already the top pass-catcher in the NFL. And NFL pundits tend to rank Jefferson somewhere in the Top 5 or Top 10.

And for the makers of Madden, Jefferson is considered the league’s sixth-best wide receiver, snagging a ’93’ score. Jefferson checked in behind Davante Adams (99), Cooper Kupp (98), Tyreek Hill (97), DeAndre Hopkins (96), and Stefon Diggs (95).

Ja’Marr Chase, who won the NFL’s Offensive Rookie of the Year award and took the NFL by storm, curiously ranked as the 18th-best receiver with an 87 score. Jefferson’s running mate in Minnesota, Adam Thielen, is classified as the NFL’s 16th-best WR with an 88 score.

Madden was founded in 1988 and has been an NFL mainstay for 34 years. Video gamers flock to the release date to play the game, while others are interested in the scoring system as it implies respect for an individual by position. Madden also shows deference to veteran players — hence Hopkins’ impressive score in 2022 — seemingly making rookie and young players “prove it” before nibbling at scores in the 80s and 90s.

The figurehead of the game, John Madden, passed away last December.

Jefferson can shove his ranking even higher in 2022 as the Vikings transition to a different offense. The first two years of Jefferson’s reign were conducted inside Mike Zimmer’s run-first offense — and Jefferson just so happened to set the NFL record for most receiving yards in a player’s first two seasons. With the new head coach, Kevin O’Connell, who will throw the ball more than Zimmer, Jefferson should be even more prolific — is the working theory anyway.

The Vikings TE1 Irv Smith Jr. did not place in Madden‘s Top 15 among tight ends. More releases of Madden rankings by position are expected throughout the week,