Kirk Cousins in the Clutch Is a Positive Shift 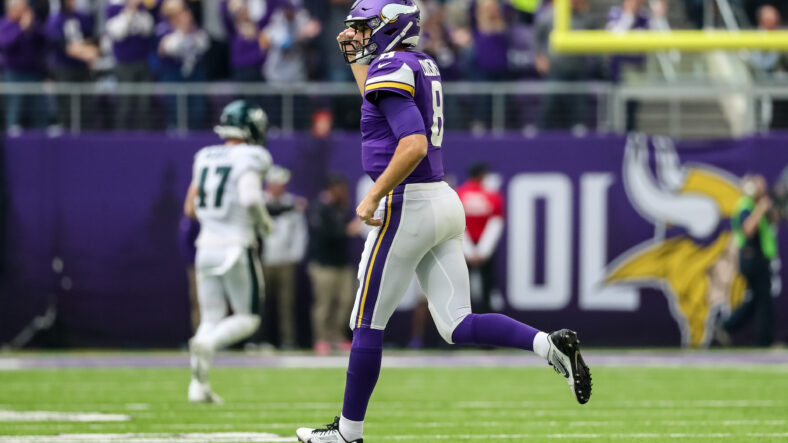 Minnesota Vikings quarterback Kirk Cousins is often criticized for falling apart when the game is on the line. While some of that criticism is fair, he has historically been much better than he gets credit for. This season, he is taking a giant step toward putting that narrative to rest.

For 4th quarter comebacks, Cousins shares the first-place rank with Indianapolis Colts quarterback Matt Ryan. They have three so far on the season. For game-winning drives, he shares the first-place rank with New York Giants quarterback Daniel Jones. The Giants are off to a surprising 4-1 start. They both have three game-winning drives.

Cousins has performed above average overall this season. That said, there is definitely room to improve. That is expected in a new system under new head coach Kevin O’Connell. His only bad game that Vikings fans would like to forget was against the Eagles. To be fair, that wasn’t just a bad game for Cousins. Nearly everyone looked off and out of position in the matchup against the current #1 seed in the NFC. Dustin Baker provided a great recap of the Eagles game. Some of you may want to take that unpleasant trip down memory lane.

What Does This Mean for Cousins?

This is great news for the Vikings and Cousins. The ideal scenario would be one where they do not need a 4th quarter comeback or a game-winning drive. That is the ultimate goal as the Vikings adapt to the new O’Connell offense and 3-4 defense.

In the meantime, this is great to build on. This allows Cousins to build confidence in clutch situations as the season progresses. The entire game matters, but performing down the stretch is crucial. The Vikings played a lot of close games last season. Cousins finished the 2021 season with three 4th quarter comebacks and four game-winning drives. That was near the top of the NFL, and he is already close to that through five games. At the end of the day, Cousins is performing in crunch time.

Some folks who have been critical of Cousins are starting to appreciate him more because of his performances down the stretch.

Kirk hater here. This is exactly how you win me over Kirk. 4th quarter comebacks. Game-winning drives. Third down conversions. I don’t expect it all the time that is impossible, but there has been more of it the last 2 seasons. Keep on keeping on.

It was good to see Chad recognize this. He even acknowledged that Cousins did a better job of this during the 2021 season. That is something that often goes unrecognized. Other mistakes resulted in point swings after Cousins and the offense did their part down the stretch last season.

Once this Vikings squad gets in a rhythm, this team has the potential to be scary for many reasons. Cousins’ ability to finish games in the clutch is one of those reasons.