Injury to Vikings WR Could Be Serious 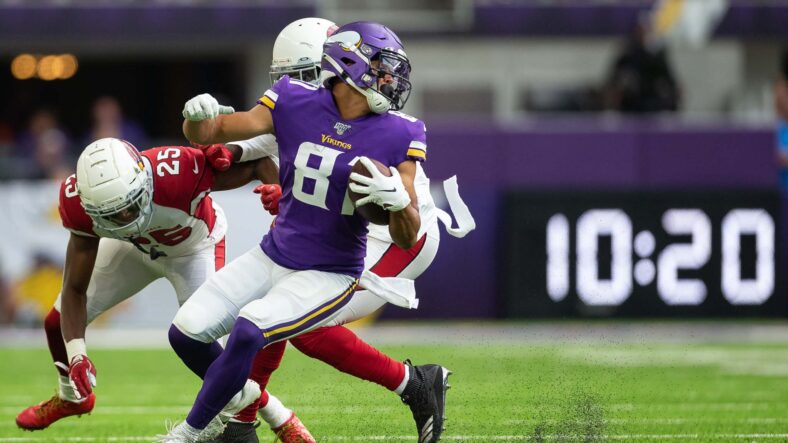 The Minnesota Vikings hope to dodge a bullet as wide receiver Bisi Johnson was hurt Saturday night in a preseason game at the Broncos. The team will know more about the injury in the next couple of days.

Johnson was among a litany of injured Vikings, including Jalen Nailor, T.Y. McGill, Josh Metellus, Troy Dye, and Brian Asamoah. For now, though, Johnson’s injury is considered the most concerning for the long-term.

Speaking about Johnson’s knee injury after the 23-13 loss in Denver, head coach Kevin O’Connell said, “We’re obviously going to have to run some more tests on that. Did not look good to me.”

Johnson, 25, missed the 2021 season with a torn ACL. If O’Connell’s fears are confirmed, Johnson could miss two seasons in succession. What’s more, Johnson was trending to make the Vikings 53-man roster this week as a WR5. Justin Jefferson, Adam Thielen, K.J. Osborn, and Ihmir Smith-Marsette seem to have the first four WR jobs wrapped up, but Johnson was on track for a roster spot.

The Vikings drafted Johnson in 2019 from Colorado State in the 7th Round. In his first two seasons, before the torn ACL, he caught 45 passes for 483 yards and three touchdowns. In fact, at a time in 2019 and 2020 when the Vikings seemingly glossed over the WR3 position, Johnson emerged as the WR3 by default. The upcoming season was supposed to be his return to prominence.

Back in the spring, Johnson told FOX9 in Minneapolis about re-intensifying his love for football after the bout with injury, “You kind of get stagnant, you know? You’re going through the same motions. You’re going to work every day. You’ve been practicing every Monday through Friday the last three years I’ve been in the league. You know, as much as I still loved it, I probably lost it a little.”

The “good” news for Johnson would be some kind of sprain, not needing a season-long recovery. However, any time a coach says “didn’t look good,” that’s usually a precursor to the worst-case scenario.

The Vikings will finalize the final regular season roster on Tuesday. If the worst is confirmed for Johnson, Jalen Nailor, Myron Mitchell, or Trishton Jackson would be on deck as a replacement.