Healthy Vikings may get a Boost from Rookie Receiver 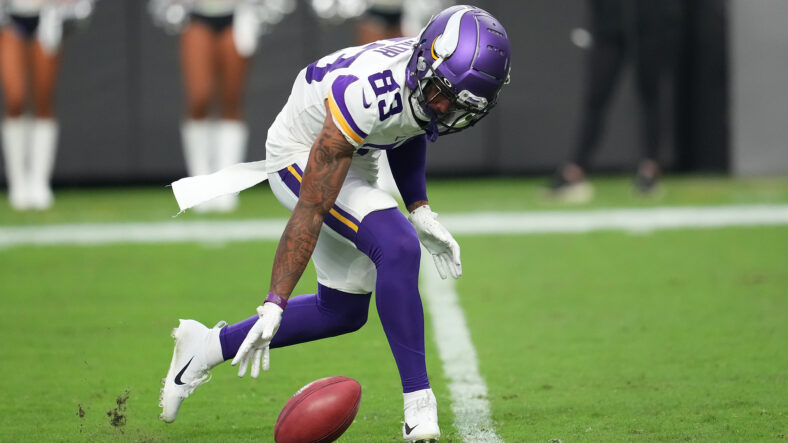 The injury report for the Vikings is an encouraging one. The Vikings appear to be remarkably healthy, with only a single name included: rookie receiver Jalen Nailor. Thankfully, Nailor’s hamstring injury doesn’t look too serious given that he was a full participant.

Heading into the Cardinals game, Minnesota will be leaning on their Justin Jefferson – Adam Thielen – KJ Osborn trio to do most of the damage through the air. We ought not completely overlook the depth options, though. Jalen Reagor and Nailor have a role to play.

For the most part, that’s going to involve playing well on special teams. Reagor is the team’s primary punt returner and Nailor is a backup. It wouldn’t be completely shocking to see the Vikings’ rookie receiver get a shot at a few returns. So far, the production from Reagor has been quite modest.

Nailor played well in college, and he was a 6th-round selection of the Vikings. Over his final two years in college, Nailor averaged 19.8 and then 18.8 yards per reception. In other words, the speedy young wideout has the capacity to generate explosive plays.

As the WR5, Nailor is unlikely to become an integral part of the offense. Or, at least, not in the next couple weeks.

What we might hope for, though, is to see some continued contributions on special teams. From there, perhaps we can see Nailor complement the offense by giving Kevin O’Connell and Kirk Cousins just one more weapon.

After 6 games, the offense has played well but not spectacularly. The team has yet to clear 30 points in any of their preseason or regular season games. Given all the talent, that’s at least somewhat notable. Minnesota’s offense is still figuring it out. Perhaps the team would be wise to see if some of their young players can contribute occasionally.

The Week 8 game is scheduled for 12 CT and it’ll take place at U.S. Bank Stadium. With a win, the Vikings would climb to a formidable 6-1.

Hopefully, the coming injury reports will simply reinforce that Minnesota has a healthy roster heading into the final 2/3 of the season.