Exciting Wideout Is Still Looking for a Team 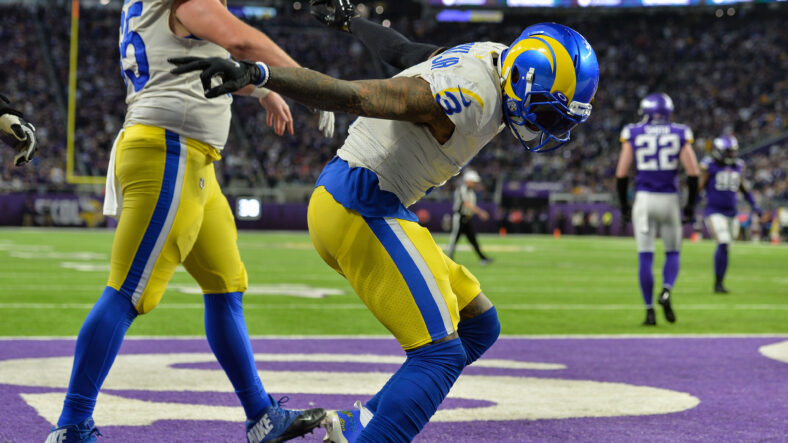 Injuries have derailed a great career on its way to the Hall of Fame. Odell Beckham Jr started his career as one of the most dangerous receivers in NFL history. In recent years, however, he can’t stay healthy.

The exciting wideout was drafted in 2014 out of LSU, six years before the Vikings selected Justin Jefferson. OBJ played one season with Jefferson’s brother for the Tigers. The 12th overall pick was the third receiver selected after the Buccaneers chose Mike Evans seventh and the Bills Sammy Watkins fourth. The Vikings are another team that passed on Beckham Jr because of the selection of linebacker Anthony Barr.

Beckham missed most of training camp, the preseason, and the season start. His debut came in Week 5 against the Falcons. The yardage in the first three games was low, but then he caught fire. In the last nine games of his rookie campaign, the New York Giants receiver recorded at least 90 yards in all of them and cracked the 100 seven times. He finished the rookie season with 1,305 yards and 12 touchdowns. One of them was one of the greatest catches in NFL history.

That catch will live forever. His stardom began after that catch, and he became the poster boy of the NFL. The 108 yards per game are still an all-time rookie record. His second and third seasons were equally successful from a statistical standpoint. After his second season, he broke Randy Moss’ all-time record for the most yards in a player’s first two seasons, which since has been broken by the exciting Vikings wideout, Justin Jefferson. Moss has the record in the first three seasons, but OBJ is second.

An ankle sprain and later a broken ankle allowed him to just play four games in 2017. In 2018, he once again cracked the 1,000 yards, despite playing just 12 games. The Cleveland Browns acquired the superstar via trade and extended his contract. In retrospect, that was a mistake.

In his first season in 2019 with the Browns, OBJ recorded 1,035 yards. It’s, to this day, his last 1,000-yard campaign. In the two seasons since, he just managed to gain 856 yards and created some issues with his teammate Baker Mayfield. The Browns then traded him to the Rams, where he won the Super Bowl in the offense of Kevin O’Connell, the new Vikings head coach. In that Super Bowl, Beckham played one of his best games in a long time. He even scored a touchdown. The whole playoffs were a magical run, and he redeemed himself with 316 yards and two touchdowns in the four games. Unfortunately, OBJ tore his ACL for the second time.

Reports earlier in the offseason implied a November return. A healthy Beckham Jr is still one of the best weapons in football. His old team, the Rams, are the frontrunners to re-sign the standout athlete. However, he’s a free agent, so any other team could bring him in, and apparently, he’s ready to sign somewhere.

All 32 teams should be interested. He would make some sense on the Vikings. The ties he already has with various Vikings could help. He makes sense as another weapon in the offense because no team can ever have enough of them. A spread-out lineup with Jefferson, Thielen, Osborn, and Beckham Jr. is almost impossible to defend, considering Dalvin Cook is in the backfield. That offense could be the most dangerous in the whole league.

He already has some ties with the Vikings. Kevin O’Connell coached him when they both were on the Rams. LSU alumni always have a strong bond, especially the receivers. He played with Jarvis Landry in Cleveland and could play with Jefferson in Minnesota. Jefferson, and Dantzler, wore a shirt during the warmup against the Ravens that said “free OBJ.” Jefferson also had a viral tweet in December 2022.

It’s unlikely that the wideout ends up on the purple team, but it would be the most exciting possible signing for the Vikings and the thought of that potential on offense is a great one.